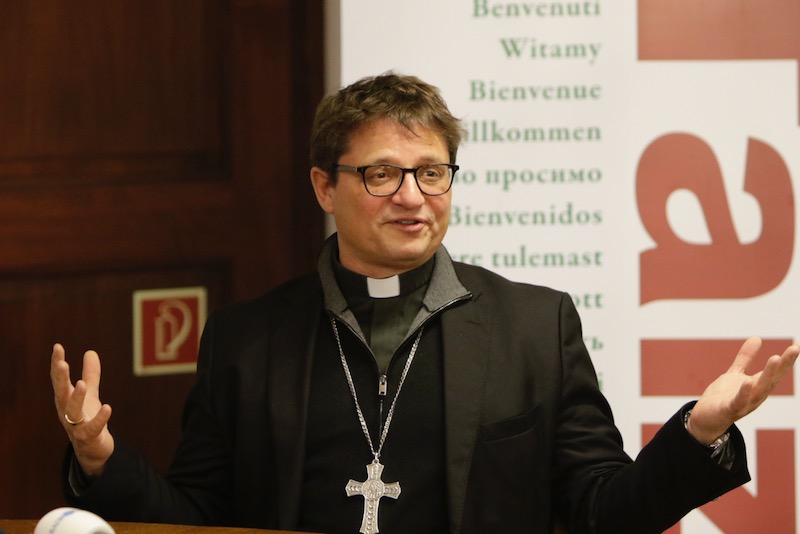 Bishop of Basel Felix Gmür is among those critical of the new Vatican parish instruction.
Michael Debets/Zuma Press/PA Images

The Vatican instruction, The pastoral conversion of the parish community in the service of the evangelising mission of the Church, of 20 July continues to be hotly debated in the German-speaking countries.

In Switzerland, it has been sharply criticised by the Bishop of Basel, Felix Gmür: “That the Vatican sees the parish solely concentrated on the parish priest does not reflect our reality. It is, moreover, a theologically deficient and too constricted a view,” Gmür wrote in a letter to church employees in his diocese. The Vatican Instruction left the “stale impression” that in the final instance the Vatican was only interested in the “predominance of the clergy”.

Parishes would continue to be led by leadership teams in his diocese and lay leaders would continue to be addressed as such, Gmür underlined. Parish communities had to be organised democratically in Switzerland, moreover, he recalled, otherwise they were not publicly recognised by the state.

“As bishop I will not allow myself to be paralysed or blocked by these restrictive orders as much of the instruction is pretty far removed from reality,” Bishop Gerhard Feige of Magdeburg in former eastern Germany emphasised. “This is particularly so in our extreme diaspora situation, a situation which Rome obviously has not the vaguest idea about, as there are no positive solutions whatsoever for the drastic shortage of priests in the instruction,” Feige wrote in his letter to the faithful.

The Philosophical-Theological University Benedict XVI at Heiligenkreuz in Austria, on the other hand, said the Instruction would certainly have contributed a great deal to plans for structural parish reforms that had been carried out in Austria and Germany in recent years and would also have helped to make the priesthood and the Church “attractive once more”, had it been published earlier.

For the editor in chief of KNA, Ludwig Ring-Eifel, the eleventh hour has now come for the German Church. Lay Catholics, especially many women, were giving up parish work. Seminaries were empty and the majority of German bishops were outraged by the Vatican instruction. There was now a deep rift between the German Church and Rome, Ring-Eifel commented in an opinion article on katholisch.de, the German Church’s official website.

Pope Francis had contributed to this state of affairs, Ring-Eifel pointed out. The Pope’s words and gestures had been interpreted as an invitation to a liberalise and democratise the Churchand had thereby roused expectations which were not viable under present church law. With the synodal procedure, the German bishops had thus begun to question church law – “and, as a last consequence – to demand that it be changed”, he said.

“How Pope Francis intends to maintain church unity in this situation, which is strained to breaking point, is not yet recognisable,, Ring-Eifel said. It was quite clear that by now there were enough reasons for the Pope to visit Germany and explain what he really wanted. Unfortunately, however, the corona pandemic prevented him from leaving the Vatican. “And so the pressure in the German kettle will go on rising,” Ring-Eifel prophesied.