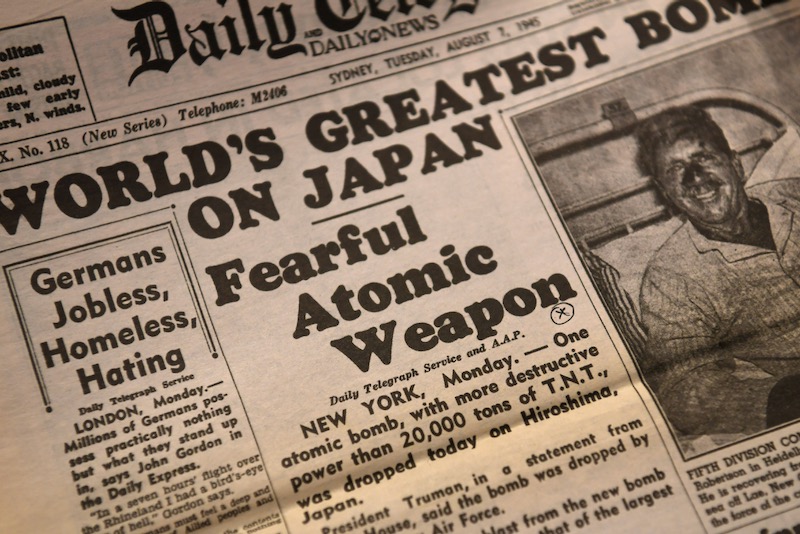 Calls for abolition of nuclear weapons to mark Hiroshima Day 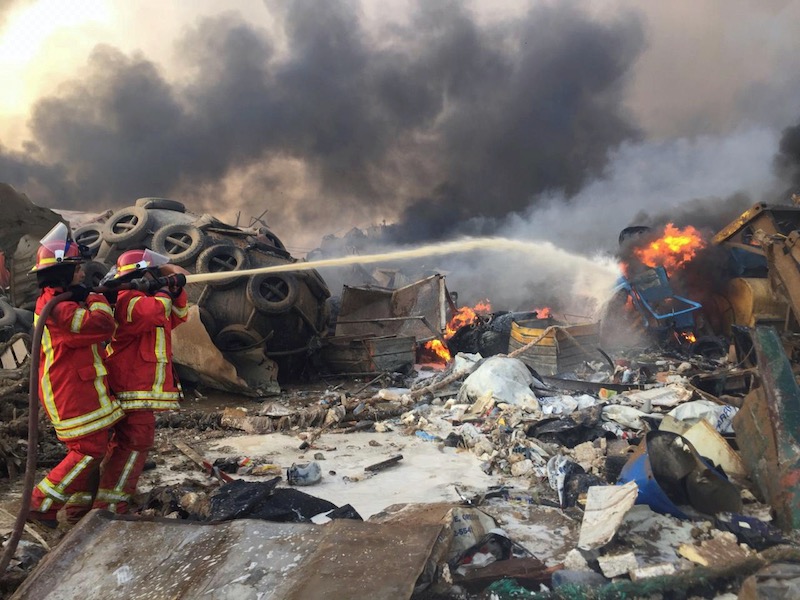 Pope Francis called for prayers after at least 100 people were killed and 4,000 injured after an explosion of nearly 3,000 tons of ammonium nitrate caused devastation in Beiruit.

“Let us pray for the victims and their family members, and let us pray for Lebanon so that with the effort of everyone in society, political and religious, it may face this tragic and painful moment and, with the help of the international community, overcome the serious crisis it is experiencing,” he said at the end of his general audience today.

Hospitals in the Lebanese capital are overwhelmed with those suffering injuries from a massive explosion in Beirut's port, causing widespread damage to the city and rocking the tiny Mediterranean nation already devastated by the coronavirus and its worst financial crisis since the 1975-1990 civil war.

The disaster has already mobilised international aid efforts, with many countries and aid agencies offering to help.

With no electricity, windows blown out throughout Beirut and holes punched into concrete by the blast, large numbers of buildings have been rendered unstable. As well as attempting to retrieve colleagues and existing patients from the wreckage, doctors, nurses and paramedics are treating the injured in car parks, some of which were already being used for coronavirus testing.

Christian Aid, which works in Lebanon alongside partners, expressed its horror at the scale of human suffering caused by the blast, and echoed the widespread concern that it could further destabilise a country that was already facing an economic and political crisis.

Máiréad Collins, Christian Aid’s senior advocacy advisor on Syria, Iraq and Lebanon, said: “The horrific and shocking explosion in Beirut comes amid what was already a perfect storm in Lebanon of displacement, pandemic, civil unrest, government corruption and economic crisis.

“This morning our partners are waking up to devastation in Lebanon’s capital city. There are scarcely any homes that are not damaged, with many destroyed; businesses and livelihoods were wiped out in seconds.

“The Covid-19 pandemic has already exposed the Lebanese workforce to a steep drop in living standards. As many as 75 per cent of Lebanese workers are in the informal sector, and the proportion is higher for Syrian refugees.

These people have no social protection to help them weather the economic crisis.

Already in April of this year, our partner Basmeh and Zeitooneh [Smile and Olive] reported that they had spoken to families who at that early stage were already reporting having no food, not even bread in their homes.

“Now, the food crisis will deepen further. The grain stores in the port are completely destroyed. The port is the entry way for Lebanon’s grain imports; they import 90% of their grain for the staple Lebanese bread.

“This explosion has made a very dire situation worse – with a growing number of Lebanese vulnerable to destitution - and could not have come at a worse time for the besieged country.”

Aya Majzoub, Lebanon researcher with Human Rights Watch, said: “People won't be able to rebuild their homes, businesses, livelihoods. There are reports of hospitals turning away patients because they don't have the capacity.

“Even before this blast, there have been shortages of medical equipment, protective gear. The health care capacity was already overstretched. I don't know how hospitals are going to be able to handle these additional injuries.”

The explosion is believed to have involved 2,750 tons of ammonium nitrate which had been stored at the port for many years.

Lebanon's dire economic crisis, exacerbated by the Covid-19 pandemic, was already pushing people into a struggle for survival, Catholic and other humanitarian agencies have warned, as growing numbers of families can no longer afford the basic food, electricity, hygiene, water and cooking fuel needed to live. On top of that, power cuts last up to 20 hours a day.

With Lebanon's currency collapse by 80 per cent of its value since last October, spiralling inflation and unemployment running at about 55 per cent, the Catholic Near East Welfare Association pontifical mission's Michel Constantin explained that Lebanon does not have a social safety net, but the Catholic Church is reaching out to help the destitute.

An agency of the Holy See, CNEWA/Pontifical Mission works for, through and with the Eastern Catholic churches to address pastoral needs and deliver humanitarian aid.

“People have lost their jobs, are stuck at home with no employment and are getting hungry. We are distributing food, life-saving items such as medicines, food and milk for children for families who have lost jobs. Not to fight poverty, but to save lives,” Constantin told Catholic News Service by phone from Beirut.

“This crisis hits everybody, Lebanese families, Palestinian and Syrian refugees alike. We will start seeing children dying from hunger before the end of the year,” warned Jad Sakr, acting country director of Save the Children in Lebanon.

A recent report by the U.N. World Food Program said 50 per cent of Lebanese citizens, along with 63 percent of Palestinians and 75 per cent of Syrians in the country, had expressed doubts they would find enough food over the previous month.

For many Lebanese, aspects of the Covid-19 crisis also recall painful memories of the 1975-1990 civil war, said American Emily Redfern volunteering with Fratelli Project, supported by CNEWA/Pontifical Mission and a partner reaching those in need.

“If we offer a choice between hygiene or food boxes the families will all choose food ... every time,” Redfern explained. Speaking of the head of a household in one family she said, “He's too proud to accept help, it's a good thing his wife is not, otherwise I don't know how they would be eating.”

CNEWA/Pontifical Mission made an appeal in New York in coordination and partnership with the Oriental Congregation in the name of the pope for the victims of Covid-19 in our area (Mideast).

Constantin said the agency was choosing to help “the poorest of the poor, not the disadvantaged, but the ones one who cannot make it alone. Our partners have screened those in extreme need of life-saving items,” Constantin said of his group's operations, based in Beirut, but covering Syria, Iraq and Egypt in addition to Lebanon.

So far, donations of about $500,000 have been received and are being used in all four countries struggling from coronavirus outbreaks; those countries also have conflict, economic woes, and are housing refugees from regional wars.

CNEWA/Pontifical Mission's Constantin said he and nine others are also serving on a crisis cell team under the leadership of Lebanon's top Catholic cleric, Cardinal Bechara Rai, Maronite patriarch. Team members help the church to better “identify and prioritise needs” while appealing for assistance from Lebanese in the diaspora, foreign governments as well as Catholic and international nongovernmental organisations.

“We have created a network in Lebanon to help families in need and keep any family from dying of hunger,” Cardinal Rai told Vatican Radio recently. “Half of the Lebanese population lives without the food they need, and many are out of work.”

Caritas Lebanon, St Vincent de Paul and other institutions as well as parishes are part of this cooperative network.

Rita Rhayem, who directs Caritas Lebanon, warned that the international community has largely remained silent as organisations struggle to aid not only Lebanese, but also Syrian refugees and migrant workers.

Caritas helps provide housing assistance and food to refugees and shelter to foreign domestic workers evicted by employers who can no longer afford their services, but the Catholic humanitarian agency also must seek resources for this aid.

“The last couple of months have been really challenging for Caritas Lebanon: The number of beneficiaries has tripled while the people who used to support us can no longer do so,” Rhayem told a July news conference presenting Caritas Internationalis' annual report in Rome.

In October 2019, popular protests broke out across Lebanon as the citizenry took to the streets to call for an end to the decades of corruption that has blighted the country. As the protests gained momentum, there followed a banking crisis, which threatened to collapse the country’s economy.

In late 2019, there was a creeping inflation, with the previously stabilised dollar exchange rate of 1500 Lebanese Pounds to 1USD changing. This led to banks no longer allowing customers to withdraw their USD and the price of basic household goods in some weeks tripling in price. In 2020 the economic crisis has deepened.

The IMF had already projected a GDP shrinkage of 12 per cent, the worst in 30 years. Poverty amongst the Lebanese was expected to rise to 52 per cent and up to 83 per cent amongst Syrian refugees.