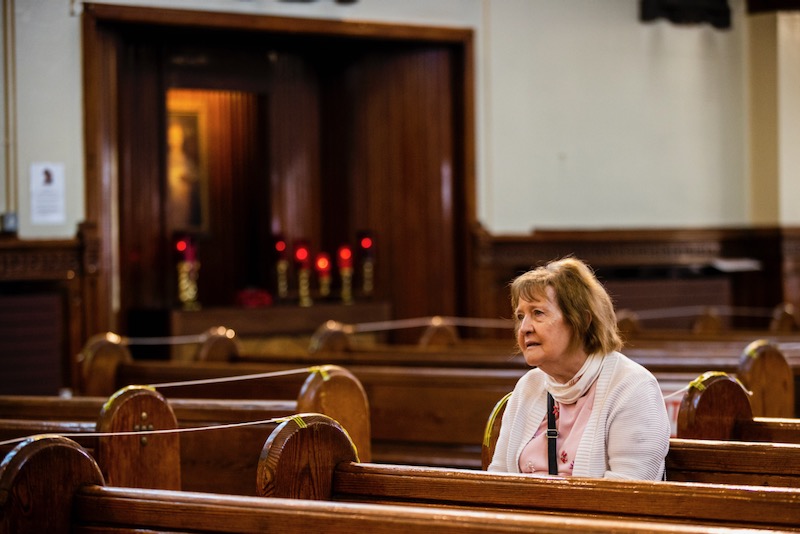 Some Catholics denied Communion even after churches reopen 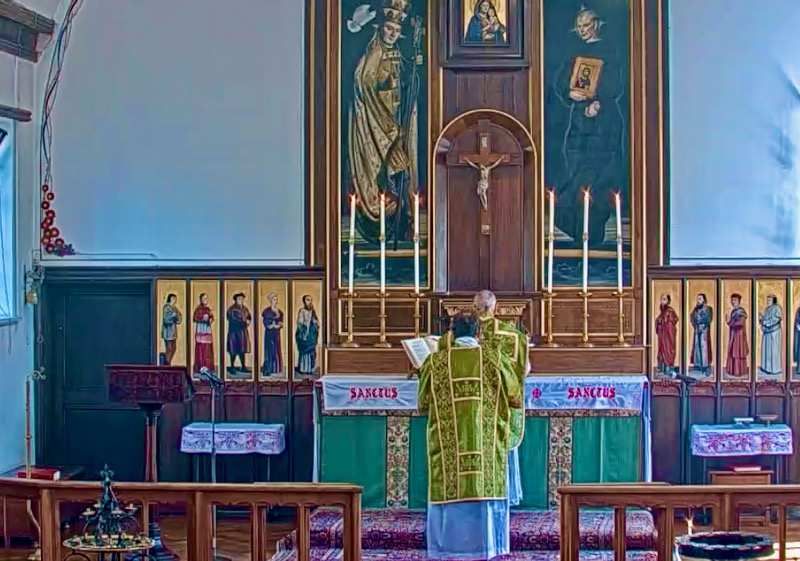 The priest and deacon face east at SS Gregory and Augustine in Oxford.
Parish livestream screenshot.

A diocese is in “fraternal dialogue” with one of its priests after the priest told his congregation on Sunday that they could not receive Holy Communion because the Covid-19 guidelines “make it difficult to receive Our Lord with reverence”.

The Archdiocese of Birmingham denied that its guidelines were irreverent, and said actions by actions by Fr John Saward at the celebration of Sunday Mass on 5 July “are the subject of a fraternal dialogue at present with his diocesan superiors”.

After churches reopened for public Mass on Sunday, Fr Saward, priest in charge of SS Gregory and Augustine in Oxford, told parishioners in his homily: “I know how much you want to come to Christ our Lord, heavy laden as you are with the burdens of these strange times, and to experience the rest and peace he alone can give, in the blessed sacrament of his love.

“But though at last today you can assist at Holy Mass, you will need to wait a little longer before receiving Holy Communion. The health and safety regulations for public Masses, make it difficult to receive Our Lord with reverence.”

In the homily, livestreamed along with the rest of the Mass, he continued: “The current regulations surround the distribution of communion with restrictions that will scandalise some and make others feel discomfort, the opposite of peace and rest.

“So as your priest, I’m asking you to be patient a little longer, and to persevere in prayer, in faith, hope and love, of the Lord Jesus, who is meek and lowly of heart. This continuing eucharistic fast can do much good if we see it as an opportunity for deepening our understanding of what the Holy Eucharist is, of who the Holy Eucharist is, and for strengthening the reverence with which we receive it.

“In particular, let’s make sure our souls are clean, and free from sin, by going to confession, because if we receive Holy Communion with mortal sin on our conscience, we prevent our Lord from imparting his grace and his rest to our souls.”

He said he was available to hear confessions, usually outside on the church lawn to observe social distancing.

As with all newly-reopened churches throughout England, Fr Saward is obliged to observe the rules set out by the Birmingham archdiocese, which are in line with government guidelines issued as lockdown was eased last weekend.  A social distance of one metre plus is expected, subject to the requirement that people must wear face coverings. Hands must be sanitised on entry and exit. Worshippers might be asked to provide contact details upon arrival, there will be no Sign of Peace or congregational singing, no Mass or Hymn books and Holy Communion is distributed differently.

The precise rules for Holy Communion in Birmingham are complex. In effect, although the priest himself can receive communion in both kinds, the deacon and congregation can only receive the host, and only on the hands, not on the tongue as can be the practice in the more traditional parishes.

The guidelines state: “Communion must be given silently in the hand only, with the communicant standing, and avoiding any physical contact. People should wait in their pews until instructed to move forward to the priest for Holy Communion by the stewards, always aware of the regulations on social distancing in the orderly queue. When they approach the priest, they should do so with arms at ‘full stretch’ so that there is a good distance between the priest and the communicant. Their hands, palms upwards, one of top of the other, should be extended as flatly as possible.”

One person, who was not physically present but watched the Mass online, said he was “taken aback” that parishioners were told their eucharistic fast must continue. “It seems we have a church within a Church.”

He added: “I felt outraged as I listened to the sermon – he was saying that the body and blood of Christ feed our souls, make us alive with divine life, that the Eucharistic Fast had enabled us to grasp these truths with deeper understanding. He knew how much we wanted to come Christ Our Lord.

“The suggestion that current regulations on receiving communion come with restrictions which ‘will scandalise some and fill others with discomfort’, the opposite of peace and rest, is an interpretation not shared by the Bishops and his brother priests or the Roman Catholic Church.  I thought he would end by offering Holy Communion to those who wished to receive but he finished Mass and left the Altar without further comment.

“In short, parishioners at St Gregory's may not receive until Fr John decides. I think that is a scandal and must surely be a decision outside his canonical jurisdiction. It felt more like Mass in a sect than in the universal Church.”
He said the church usually attracts 40 to 50 people. The altar at SS Gregory and St Augustine had been moved forward in the late 1970s, after the Second Vatican Council, so that Mass could be celebrated facing the people (versus Populum). After Fr Saward arrived, it was moved back to its current position against the wall, so Mass is now always said with the priest’s back to the people (ad Orientem ... towards the East).
Fr Saward, born in 1947, is a highly regarded theologian and author. He was ordained an Anglican priest in 1972 and received into the Catholic Church in 1979. Married with three daughters, he was ordained to the Catholic priesthood under special papal dispensation. He is prior of the Priestly Fraternity of St Dominic (Dominican Tertiaries) in England, senior research fellow at Blackfriars and former lecturer in dogmatic theology at St Cuthbert's, Durham.
Fr Saward did not respond to The Tablet's request for a comment.
In a statement, the archdiocese told The Tablet: “The Archdiocese of Birmingham received correspondence from The Tablet concerning personal comments and actions by Fr John Saward at the celebration of Sunday Mass on 5 July. Those are the subject of a fraternal dialogue at present with his diocesan Superiors. We are not aware of any complaints made by any individuals directly with the Archdiocese or with Fr John Saward.
“In light of public health guidance, the Bishops’ Conference of England and Wales Guidelines for the celebration of Public Mass have provided a safe and reverent, temporary means of distributing Holy Communion. Those guidelines are to be followed by all clergy in the Archdiocese of Birmingham at the celebration of Public Mass, without exception, until further notice.
“The Guidelines advise clergy who are over 70 not to distribute Holy Communion at present but to arrange for another Minister to do so on their behalf.”
Back to articles
Back to articles