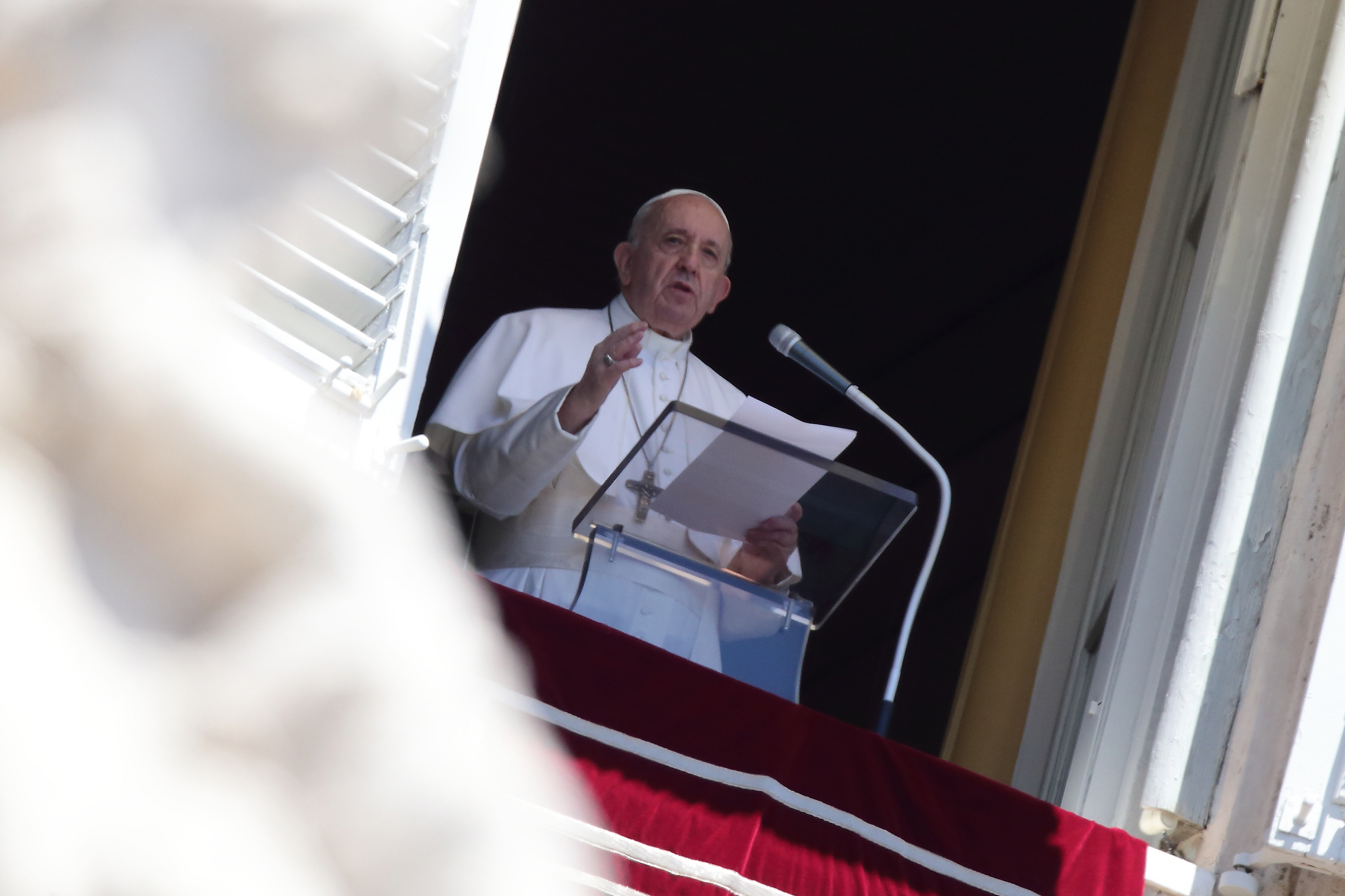 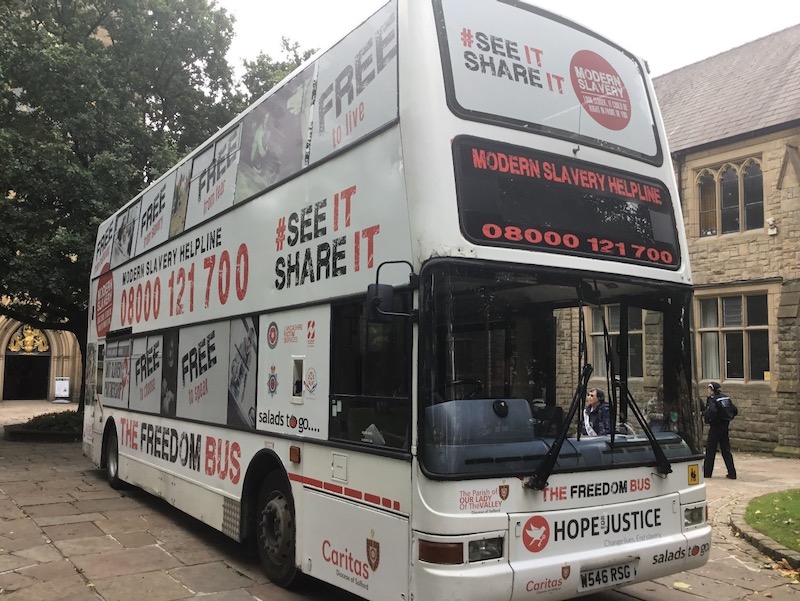 The anti-slavery and anti-trafficking bus.

Support to victims of modern slavery and human trafficking has continued throughout the coronavirus crisis. The Medaille Trust, formed in 2006 by Catholic Religious, is the largest provider of safe house beds for victims of modern slavery in the UK with a national network of nine safe houses providing shelter and support for 116 men, women and their children at any one time.

Garry Smith, CEO of the Medaille Trust, told The Tablet this week that the UK Government confirmed in March that, “providing support for victims of modern slavery is an essential service and therefore our frontline staff were designated as key workers and provided with letters from the Home Office that they were able to show to officials if challenged about why they were travelling.”

Medaille Trust safe houses have taken in people of all faiths or no faith and nationalities of current guests include Albanians, Romanians, Vietnamese, Chinese and British. Freedom has been restricted during the pandemic, which is “not an easy thing for people who have only just regained it after leaving exploitative situations” said Mr Smith.

Also, “there was disappointment that their lives were again put on hold as many appointments were cancelled.” Client wellbeing has been a priority, so “we have held fitness and dance classes in the houses, encouraged creative activities such as arts and crafts in order to boost mindfulness, and practical pusuits like gardening”.

English classes on the internet have been used. “We also worked alongside our partners, The Salvation Army, and other providers to share knowledge and best practice and to implement new ways of working such as payment cards for clients to receive their subsistence, rather than having to withdraw cash,”  Mr Smith reported. He praised the house teams’ “resilience and hard work” at this time.

Most of the referrals to the Medaille Trust houses during lockdown were through the homeless services “which suggests some modern slavery businesses have closed down and workers made homeless” reported Mr Smith. He feared that “when lockdown restrictions are eased further there may be an increase in modern slavery as people may find themselves in dire circumstances and therefore taking riskier job opportunities in order to feed themselves and pay off debts.”

This was echoed last week by Sr Imelda Poole, a Sister of the Blessed Virgin Mary. Speaking at an online gathering of Women Religious on the Frontlines organised by the US and British Ambassadors to the Holy See, she reported that in her work with RENATE (Religious in Europe Networking Against Trafficking and Exploitation), she sees three shifts that have taken place across Europe since the lockdown began.

One is a massive increase of hunger, another is that counselling of trafficking victims is now largely online, and the third is an explosion of children going online unsupervised, leading to an increase in sexual exploitation. The latest Global Slavery Index estimates that 136,000 people in the UK are experiencing modern-day slavery.

Caritas Salford became involved “partly because we were inspired by the work of the Medaille Trust who have two safe houses in Manchester and we wanted to raise awareness of what was then an unknown problem that was in plain sight and so large that we did not know where to begin”, Director Mark Wiggin told The Tablet.

Anti-trafficking work started as a parish initiative to raise awareness and has grown to deliver workshops and network nationally. “From a single parishioner in the parish of Our Lady of the Valley in Clitheroe, Lancashire, we found that in the parish there was a journalist who helped write stories on the subject, a police officer who created the Lancashire Anti-trafficking Unit, and a sign-writer who covered a school bus with the anti-trafficking help line number” he said. “By unlocking the potential in just one parish we have developed a service that works in partnership with other statutory and voluntary organisations nationally” he added.

Caritas Anti-Trafficking is supported by Bishop John Arnold of Salford who recently reflected that, “as a part of Caritas Salford, working in partnership with Lancashire Police, the Medaille Trust and the Santa Marta Group, it has helped to raise awareness”.

In Salford Diocese the focus is on identifying trafficked people in the Caritas outreach to homeless people. “We know that there are trafficked people who use homeless services and we need to identify them and provide the services they need to connect to professional voluntary and statutory agencies that can help them” said Mr Wiggin.

Another focus is on young people who are being used to carry drugs from one part of the country to another and awareness is raised with headteachers and young people themselves. A third priority is raising awareness of the supply chains that have services and products connected to slave labour. “By our diocese demanding from our suppliers that they demonstrate their goods and services are slavery-free” reported Mr Wiggin, “we can make some progress towards the local, national and international goal of eradicating modern slavery.”

Bakhita House in London has been celebrating five years since it first opened its doors as a safe house for women escaping trafficking. In that time the house has welcomed 123 guests and 11 babies. A ministry of the Archdiocese of Westminster and Caritas Westminster, Bakhita House provides women who have fled from their captors with safety and support and allows them to recover from their ordeal. "The Church has allowed us the time to work with women that need it” said Service Manager Karen Anstiss.

Bakhita House is currently providing quality support for the eight women and three babies living in the house during Covid-19, She is living in with them and believes it is not just about putting a roof over their heads, but about ensuring a caring and loving environment for traumatised women.

Lincolnshire has various types of trafficking – agricultural labourers, people around the  ports and in places like car washes, as well as trafficked women, Bridgetta Rooney, a Sister of St Joseph of Peace, told The Tablet.

She has arranged two days on trafficking in Cleethorpes, one addressed by Bishop Alastair Redfern who is the Church of England bishop for trafficking, to raise awareness. The churches that attended now advertise the helpline and also the car wash app. “I went out before lockdown with a group who bring hot drinks and meals to the street women here and we have seen very young frightened girls out on the streets with usually a pimp with them” she said. “They won’t let us near them so all we can do is alert the help lines.”