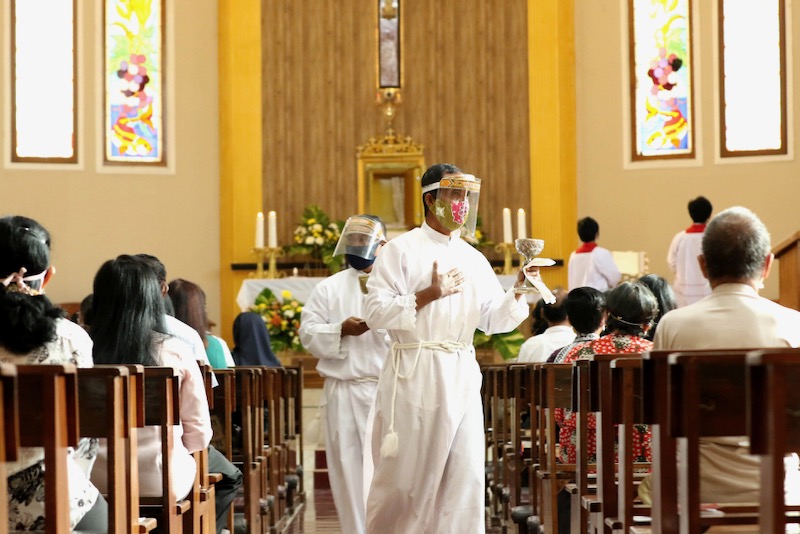 Pope Francis has urged Christians to stop complaining about the state of the world and society, but instead to pray.

“It is useless, and even boring, that Christians waste time complaining about the world, society, what is wrong. Complaints don't change anything,” he said.

He was speaking on the themes of unity and prophecy in St Peter's this morning at the Eucharist after the annual blessing of the palliums on the feast of St Peter and St Paul.

Peter, a fisherman, and Paul, a Pharisee scholar who taught in synagogues were two of the most different people. But united by faith, they became as brothers.

Describing the time of Peter's arrest, when persecution of the early Christians was rampant, Pope Francis said: “Herod was raging, the persecution was violent, the Apostle James had been killed. And now Pietro is also arrested. The community seems beheaded, everyone fears for their own life. Yet in this tragic moment no one escapes, no one thinks to save their skin, no one abandons the others, but all pray together. From prayer they draw courage, from prayer comes a unity stronger than any threat.”

Unity is activated with prayer, because prayer allows the Holy Spirit to intervene, he said. “In those dramatic situations, no one complains of the evil, of the persecutions, of Herod. Nobody insults Herod – and we are so used to insulting those responsible.”

Those Christians did not blame but prayed, he said.

“What would happen if we prayed more and murmured less, with the language a little calmed? What happened to Peter in prison: as then, so many doors that separate would open, so many chains that paralyse would fall. And we would be amazed.”

Pope Francis noted that St Paul exhorted Christians to pray for everyone and first of all for those who govern. He said: “Let us pray for the rulers. Let us pray: they need prayer. It is a task that the Lord entrusts to us. Shall we? Or do we talk, insult, and that's it?

“God expects that when we pray we will also remember those who don't think like us, those who have closed the door on us, those who struggle to forgive. Only prayer undoes the chains, like to Peter; only prayer paves the way for unity.”

He also spoke about the need for prophecy, “true prophecy: not of speeches who promise the impossible, but of testimonies that the Gospel is possible. No miraculous manifestations are needed.”

He continued: “We need lives that manifest the miracle of God's love. Not power, but coherence. Not words, but prayer. Do not proclaim, but serve. Do you want a prophetic Church? Start serving, and shut up. Not theory, but testimony. We don't need to be rich, but to love the poor; not to earn for us, but to spend for others.”

Criticising “those pastoral projects that seem to have their own efficiency, as if they were sacraments, efficient pastoral projects”, he said that instead the Church needs “pastors who offer their lives, who fall in love with God”.