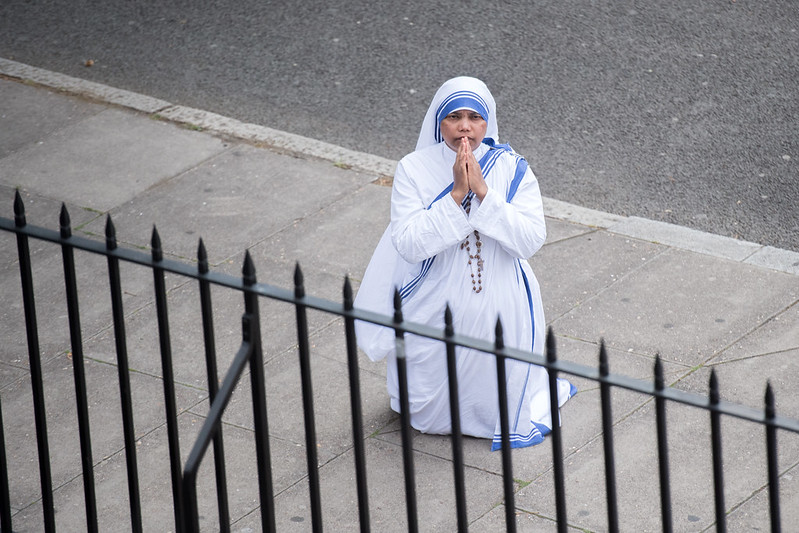 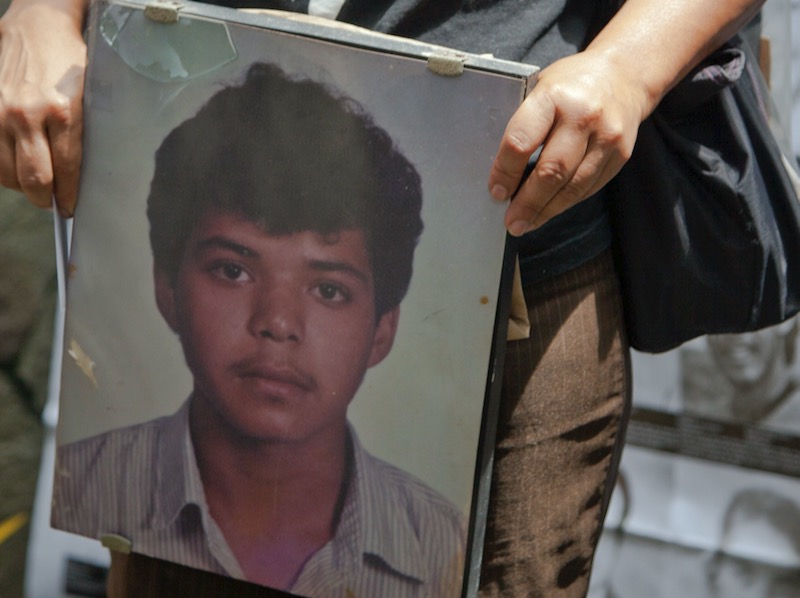 Relatives of missing people during Salvadoran Civil War at a meeting in support of Spanish Judge Ely Velazco's extradition of former militaries for the murder of the six Jesuits Priests. File pic
Edgar Romero/DPA/PA Images

Last week Inocente Orlando Montano, accused of planning the murder of six Jesuits, their cook, and the cook’s 15-year-old daughter at the Central American University (UCA) in El Salvador on 16 November 1989, went on trial in Madrid.

Spanish prosecutors allege that Montano took part in “the decision, design and execution” of the murders.

I had nothing to do with the military, and “my responsibilities were limited to the security forces of the police,” Montano said as he began his evidence at the start of the trial on 10 June. No cross-examination of the ex-vice-minister of public security was allowed, as he had exercised his right to answer only questions from his counsel.

A request from the human rights organisations that had helped to bring the case to have their questions read into the court record was refused in case it affected his right not to make statements.

Montano nevertheless agreed that he had been a member of the army year group known as la Tandona, the “class of 1966”, whose members “by chance” ended up in the senior posts of El Salvador’s General Staff.  Montano also admitted being aware of a well-known death squad known as Los Maneques (“the mates”), which he described as “a group of extreme right-wing civilians who ran the capital of El Salvador”.

One of those murdered, Fr Ignacio Ellacuría, was a key player in peace negotiations between FMLN rebels and government.

Montano insisted he had nothing against Fr Ellacuría, whom he described as an eminent political scientist who had good relations with Salvadoran President Alfredo Cristiani and was an adviser to him, and also had good contacts with the FMLN guerrillas.

He claimed that the Jesuits had orchestrated the 1979 coup that overthrew the military regime of General Francisco Romero. The former colonel then claimed that there were photos and videos showing the liberation theologian Jon Sobrino “training 10 or12-year old boys to use AK47s”. The Salvadoran Jesuits have denounced this claim as “false”.  Fr Rodolfo Cardenal, director of the UCA’s Monseñor Romero Centre, said that there is a photo of the ceremony at which the guerrillas handed over their weapons in which another Jesuit, Fr Jon Cortina, is shown holding a rifle.

This was perhaps the one point at which the court heard the real Montano, recycling the lurid fantasies about the Jesuits that circulated in the 1980s among the Salvadoran military. The picture ex-colonel Montano painted of himself in the Madrid court varies considerably from the account given by the UN-backed El Salvador Truth Commission in 1992. According to the Commission, on the night before the murder Col Montano attended a meeting with the Chief of the General Staff, Col. Emilio Ponce, which gave Col. Alfredo Benavides orders to kill Fr Ellacuría and leave no witnesses. The Commission report also describes Montano as saying publicly that the Jesuits were in sympathy with the guerrillas.

On the third day of the hearing the court heard from José Luis Navarro and Enrique Arnaldo, two lawyers who attended the 1991 trial of nine Salvadoran soldiers in El Salvador for the UCA murders as representatives of the Spanish parliament. Arnaldo said that the whole procedure had consisted in the reading of documents: the accused were not questioned; no evidence was presented and there were no expert witnesses.  The jury had refused to visit the crime scene.  Even the judge had been uncomfortable, he said.  The Spanish observers felt the atmosphere to be hostile.  The families of the accused were in court, and the defence lawyers called on the jury to ignore international pressure.  Outside the court there was the noise of sirens and a military helicopter flying so low that it was hard to hear what was being said. The trial lasted two and a half days, and on the last afternoon they went to the Spanish embassy to rest, expecting to have to wait a day or more for the verdict.  To their surprise they were summoned back to court that evening to hear that the seven most senior officers had been acquitted and two more junior had been convicted; they were subsequently amnestied in 1992.

The Madrid hearing has now been suspended until 8 July, when the court will hear evidence from René Yushy Mendoza, a former lieutenant who took part on the attack on the UCA. At the opening of the hearing on 8 June the court accepted that Mendoza’s crime was covered by the statute of limitations, and that the former soldier was willing to give evidence for the prosecution.

In a commentary as the trial opened, the Central American Jesuits and the UCA issued a statement in which they said: “The pain caused by a crime is not healed by allowing it to be forgotten, but by recognition of the truth, repentance and the restoration of the victims’ dignity.  This is the path of Christian forgiveness.  The Society of Jesus and the authorities of the UCA have expressed their readiness to forgive those who planned and carried out this horrendous crime. Nevertheless, it is necessary that the whole truth should be known, and the various responsibilities elucidated, which is the task of the courts, so that forgiveness can afterwards be offered.”  They conclude: “Knowing the truth of what happened in this and other cases will be a benefit for El Salvador, will contribute to justice for the victims, will be a huge step in the process of reconciliation and will bring peace to the killers themselves.”