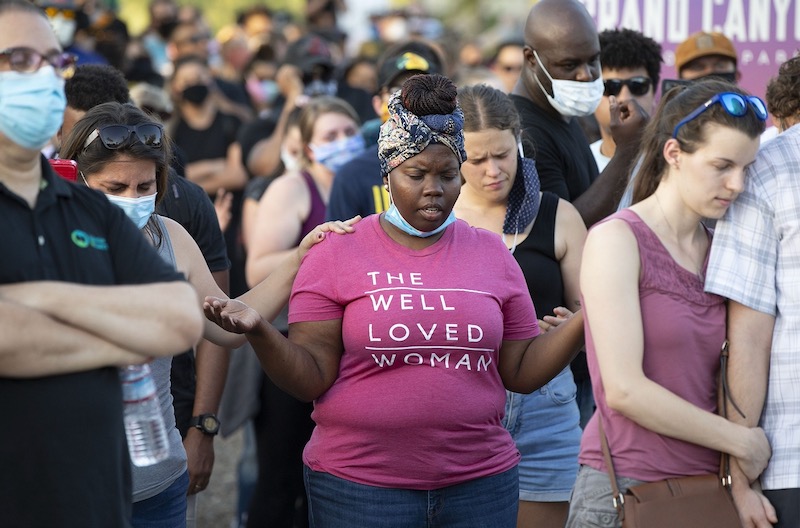 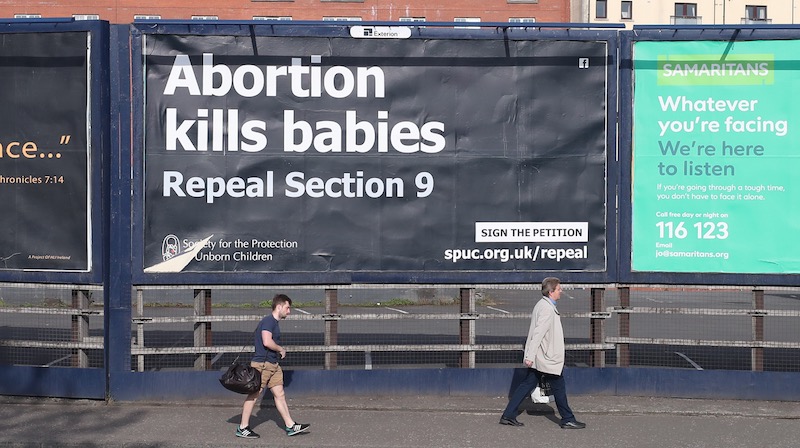 An anti-abortion poster put up by the Society for the Protection of Unborn Children on Belfast's Cromac street.
Niall Carson/PA Wire/PA Images

Pro-life groups have welcomed the Northern Ireland Assembly’s rejection of new abortion regulations which were drawn up by Westminster and came into effect in March.

On Tuesday, the majority of MLAs backed the DUP proposed motion by 46 votes to 40.

The vote will not change Northern Ireland’s abortion law but according to DUP leader, Arlene Foster, it sends a very strong message to MPs and peers at Westminster that Northern Ireland, through its elected representatives, rejects the regulations being imposed on it.

During the debate in Stormont, a number of MLAs referred to the regulation permitting abortion where there is a substantial risk to the foetus of mental or physical disability. They expressed concern that this could pave the way for abortion up to birth in cases of disabilities like Down’s Syndrome, cleft palate or club foot. MLAs were responding to issues highlighted by 24-year-old disability campaigner, Heidi Crowter, who has Down’s Syndrome.

Responding to the vote outcome, the Pro-Life Campaign said: “Westminster cannot justifiably continue to try and impose abortion on Northern Ireland. It is clear from the 46:40 vote that this devolved issue should be decided by Northern Ireland’s elected representatives and not the UK parliament.”

A spokesperson for Right to Life UK, Catherine Robinson said: “Tonight’s vote has made it clear that the UK Government must urgently hand back this devolved matter to the elected representatives of the people of Northern Ireland at the Assembly” as they had “absolutely no mandate whatsoever to impose these extreme regulations on Northern Ireland.”

She highlighted how 79 per cent of respondents to the Government consultation on the abortion regulations were opposed to any abortion provision in Northern Ireland beyond what was previously permitted. Ms Robinson said polling in Northern Ireland showed that the majority of Sinn Féin and DUP voters want their country’s new abortion framework to only allow abortions when the mother’s life is at risk.

“Only 5 per cent of all voters support introducing abortion through to 24 weeks, which is in line with what the Government will be introducing to Northern Ireland. This polling shows a clear rejection from the people of Northern Ireland for the UK Government’s regulations. If the devolution settlement of Stormont is to be respected, the cross-community view against this extreme abortion framework must be respected.”

Ms Robinson also stressed that as Stormont had been now been restored for over five months, “it is vital that the people of Northern Ireland have a say on their country’s new abortion framework through their elected representatives in the Northern Irish Assembly. It’s time to end this blatant undermining of devolution and hand back control on this devolved issue to Northern Ireland.”

Following the collapse of Stormont in January 2017, Westminster liberalised Northern Ireland’s abortion laws. Last July, MPs at Westminster passed legislation requiring the British government to introduce new laws on abortion if devolution was not restored by 21 October. When that deadline passed and the Stormont Assembly was still suspended, abortion was decriminalised by Westminster in October 2019. Stormont was finally recalled in January this year.

A liberal abortion regime was introduced in Northern Ireland on 31 March, allowing for abortion on demand up to 12 weeks and abortion up to birth in the case of fatal foetal abnormality and other disabilities.

Ahead of the Stormont debate, the Bishops of Northern Ireland on Monday urged MLAs to oppose the new abortion regulations and to support the DUP motion.

Describing the Westminster regulations as “an unjust law, which was imposed without the consent of the people of Northern Ireland”, the bishops urged the politicians “to take steps to formulate new regulations that will reflect more fully the will of a significant majority of the people in this jurisdiction to protect the lives of mothers and their unborn children.”

The leader of the Irish Church, Archbishop Eamon Martin, warned in a tweet that the new regulations “go much further than 1967 Abortion Act – imagine taking the life of an unborn child because the child has a cleft lip.”

He added: “These regulations offer no gestational limits for children with disabilities. Let’s take a stand for the equal right to life and care for all children, before and after birth, as well as their mothers.”