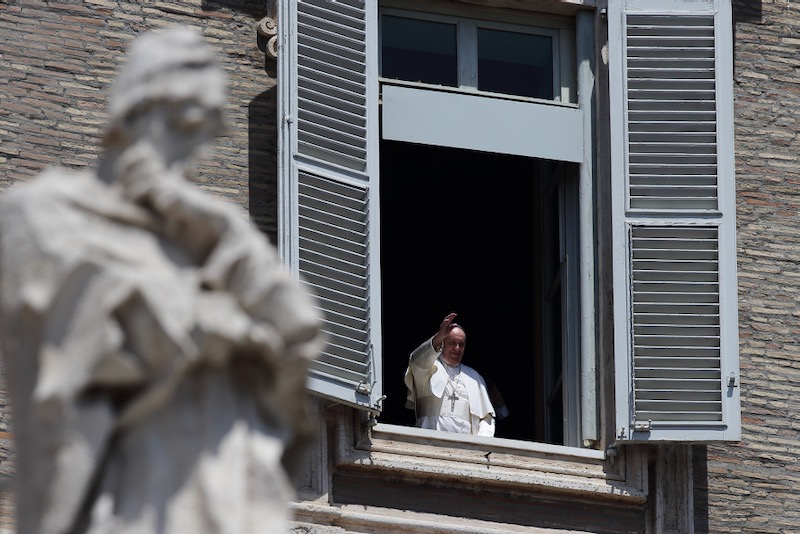 George Floyd, an unarmed black man, was pinned down by a police officer kneeling on his neck before later dying in the hospital May 25. 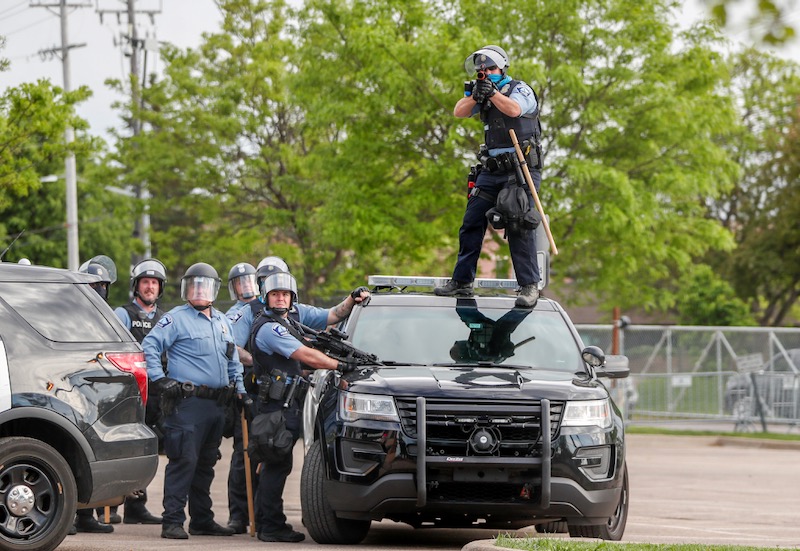 A police officer in Minneapolis aims a gun before firing at protesters gathered near the Minneapolis Police Third Precinct, May 27.
CNS photo/Eric Miller, Reuters

A video showing a Minneapolis police officer kneeling on the neck of a handcuffed man repeatedly saying “I can't breathe,” and who appears to lose consciousness or die while being pinned down, is “gut wrenching and deeply disturbing”, said Archbishop Bernard A Hebda  of St Paul and Minneapolis.

“The sadness and pain are intense,” Archbishop Hebda said of the circumstances surrounding the May 25 death of George Floyd. “Let us pray for comfort for his grieving family and friends, peace for a hurting community and prudence while the process moves forward. We need a full investigation that results in rightful accountability and veritable justice.”

A bystander filmed part of police's confrontation with the 46-year-old Floyd, an African American restaurant worker from St. Louis Park, Minnesota. who was reportedly arrested on suspicion of forgery. Floyd was pronounced dead at Hennepin County Medical Center.

The four officers involved Floyd's arrest have been fired, and the FBI is conducting a federal civil rights investigation. The officer who pinned Floyd is white.

The death inspired hundreds of people to protest at the intersection where police officers subdued Floyd. Some protesters vandalised police vehicles and the building for the Minneapolis Police Third Precinct building, where it is believed the officers involved worked. Police employed tear gas and flash grenades to disperse the crowd, and some protesters hurled rocks and water bottles at police.

Minneapolis Mayor Jacob Frey for charges to be brought against the officer who pinned Floyd with his knee.

Violent protests and looting continued and led to the shooting death of a man. Frey called for calm, saying: “We cannot let tragedy beget more tragedy.” He has asked the National Guard to come in to help keep the peace.

In his statement, Archbishop Hebda called for respect for all people and asked for prayers for Floyd and his family.

“Particularly at this time when human fragility has been brought into focus by the COVID-19 pandemic, we are called to respect the worth and dignity of each individual, whether they be civilians in need of protection or law enforcement officers charged with providing that protection,” he said.

“All human life is sacred. Please join our Catholic community in praying for George Floyd and his family, and working for that day when 'love and truth will meet, justice and peace will kiss' (Psalm 85).”

Archbishop Hebda also posted on Twitter that he offered Mass that morning for Floyd and his family. “In these days before Pentecost, we pray that the Holy Spirit, the Breath of God, might help ease our collective pain, promote justice, and bring about greater respect for all human life.”

In a video message, the pastor of St Paul's historically black Catholic parish called on his parishioners “to agitate” their community, Church and world for racial justice and healing.

And while Father Rutten said he did not know all the details of the situation, he said the video posted online, now well circulated, showing a white police officer kneeling on Floyd's neck while Floyd, who is handcuffed, repeatedly said he couldn't breathe, “seems so egregious”.

He continued: “I am saddened. I am sickened. I am angered. And I am tired of such things happening again and again. How long, O Lord, must we endure such things?”

“The misguided idea that white people can somehow push people around, or that we own this country, or that we own Minneapolis leads to terrible disrespect, leads to poverty, leads to, in this case, violence, and in many cases, violence.”

In contrast, God's love, as revealed by Jesus, shows people that they are all children of one God, equally subject to Christ the King, he said. “We are all brothers and sisters.”

In other reaction, the General Council of the Dominican Sisters of Adrian, Michigan, said Floyd's “anguished cry, ‘I can't breathe,’ as an officer pressed his knee into his neck, harkened back to the cries six years ago of Eric Garner, another unarmed African American man who died in New York police custody.”

Floyd's cry “brings to mind the long and growing list of African Americans who have been killed, seemingly for no reason other than being black,” the women religious said, and quoted Mayor Frey: “Being black in America should not be a death sentence.”

The Dominicans said they were “deeply troubled and distressed by the violent assault” on Floyd, resulting in his death.

“Our Christian faith tradition holds that we are all one people, one body; each made in the image of God,” their statement said.

The Dominicans referenced a videotaped sermon by the Rev. Otis Moss III, a prominent Chicago pastor, addressing another recent fatal shooting, that of a 25-year-old black man, for Ahmaud Arbery, in Georgia. Three white men are in custody and face a hearing on murder charges.

In the sermon, titled “The Cross and the Lynching Tree: A Requiem for Ahmaud Arbery,” Moss “speaks of racism as a virus that has infected the spirit and soul of our country,” the Dominicans said.

He said Arbery's death “is not an anomaly but a historical pattern of behaviour that binds every American to an unexamined history of our nation.

“Rev Moss powerfully summarises that unexamined history in his 22-minute sermon. It is a history that we Americans must acknowledge, and then set ourselves on a soul-searching course, powered by courage and love, to make real the ideals of freedom and equality on which our nation was founded,” the women religious said.

Maria Wiering is editor of The Catholic Spirit, newspaper of the Archdiocese of St Paul and Minneapolis.