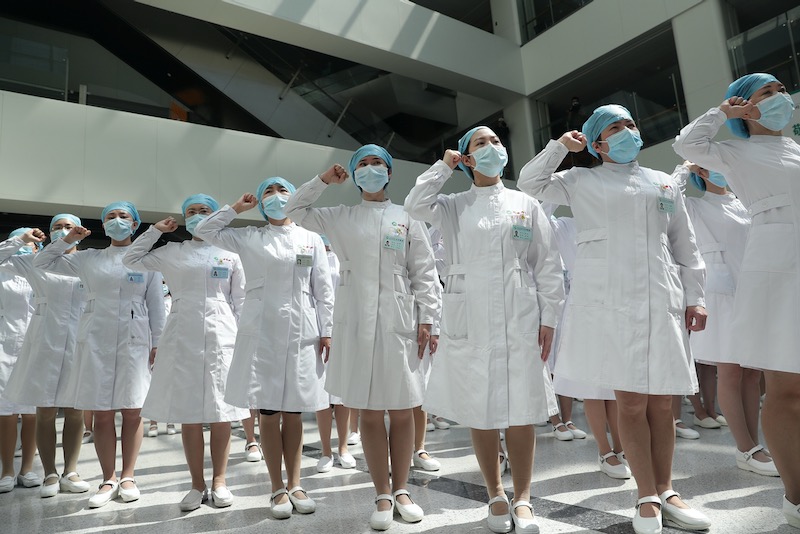 Pope thanks nurses for service

Covid-19 urges us to heed the poor, says Turkson 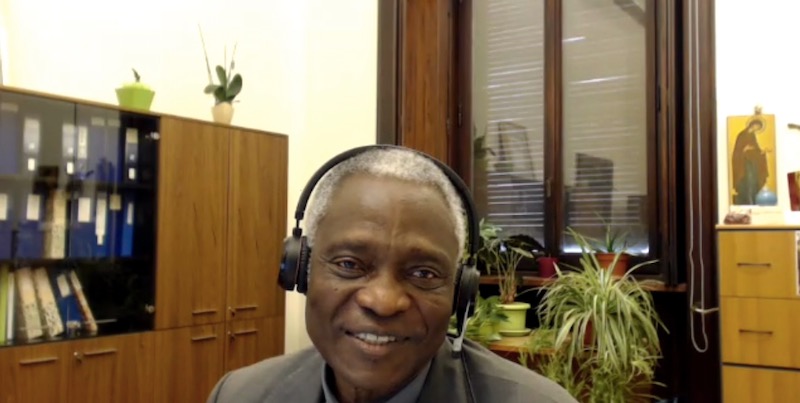 A screen grab shows Cardinal Peter Turkson, prefect of the Dicastery for Promoting Integral Human Development, during an online dialogue on the Covid-19 pandemic, May 12.
CNS/courtesy Georgetown University

The coronavirus pandemic invites Catholics to listen with courage to the cry of the poor and to act in solidarity, said Cardinal Peter Turkson, prefect of the Dicastery for Promoting Integral Human Development.

The cardinal and two other panelists at an online forum yesterday discussed global dimensions of the Covid-19 crisis.

Pope Francis describes hope and solidarity as "a new contagion", beyond the darkness of this pandemic that has "caused a lot of sorrow, broken up families, taken away dear ones", Cardinal Turkson said.

It is difficult to "feel for other people" beyond one's own family, community and country in this time of crisis, yet Pope Francis' challenge is to see that "humanity is a family that stands together", he said.

The forum looked at how the pandemic is affecting the world beyond the US borders, and what the US responsibilities are to other countries. The forum was sponsored by Georgetown University's Initiative on Catholic Social Thought and Public Life and by Catholic Relief Services.

Cardinal Turkson leads a new commission created by Pope Francis, which will confront the challenges the world is facing in battling the coronavirus pandemic and what it will inevitably face in its aftermath.

"Pandemics do not have to break us up," Cardinal Turkson said, noting that it is time to "put together our resources" to find solutions.

Another panelist, Haydee Diaz, head of programming for Catholic Relief Services in Uganda, said American Catholics are making "an incredible difference" in the lives of the poor in Uganda and other countries in Africa and around the world.

Through donors' generosity, CRS gave $500 to a Franciscan sister in Uganda's capital, Kampala, and encouraged her to sew face masks as the virus entered Uganda, Diaz said.

The sister, who started an organisation for people with disabilities and helps other vulnerable people, has distributed thousands of face masks and employs 28 people to help make them, she said.

"The poor are counting on us," said Diaz, noting that "they don't know where their next meal is coming from".

CRS is "an extension of the Catholic Church's solidarity", and the work is evidence of US Catholics' compassion and love, she said.

Noting that "there is fear" and a tendency "to turn inward" as the United States battles the pandemic at home, Diaz said Catholics "are called to serve the most vulnerable".

In countries that have no safety nets, people who were already hungry are now even closer to destitution, she said.

A sugar cane grower told Diaz that children have been lining up outside his house in Kampala asking for sugar cane, she said.

He realised that for many families in his neighbourhood, this sugar cane is now their only food, she said.

Cardinal Turkson said the idea for a Covid-19 commission came when the church was already distributing ventilators and other equipment to health care institutions in Italy.

The Vatican was trying to address "how we can be of help to the whole world".

The commission has five working groups. The first is dedicated to listening to and supporting local churches. The second is focused on research and the study of the pandemic and reflecting on society and the world after the coronavirus.

Other working groups focus on communication, relations with other countries to assist and share valuable research information, and financing the commission's relief efforts.

The "temptation to exploit the situation of need to make it paternalistic has always been there", Cardinal Turkson said.

But "what moves us away" from this "is to recognise the human family as broader" where when one part suffers, the whole suffers, he said.

The Rev David Beckmann, president of the Christian anti-hunger lobby Bread for the World, urged US Catholics to call their congress members to provide more international aid.

"They aren't getting many calls about international aid," he said, noting that "we need to get the US government to provide leadership."

People in the US can "reach out to people in our own communities who are hungry as well as the rest of the world" said Rev. Beckmann, an ordained Lutheran minister.

"We can walk and chew gum at the same time," he said, noting that "it's in our long-term interests" to be helping internationally.

Catholics make up about half the membership of Bread for the World.

John Carr, director of the Initiative on Catholic Social Thought and Public Life and moderator of the discussion, asked Cardinal Turkson to tell Pope Francis that "he does not stand alone".

"We stand with him," he said, noting the "powerful image" of the pope standing in an empty St. Peter's Square around Easter.