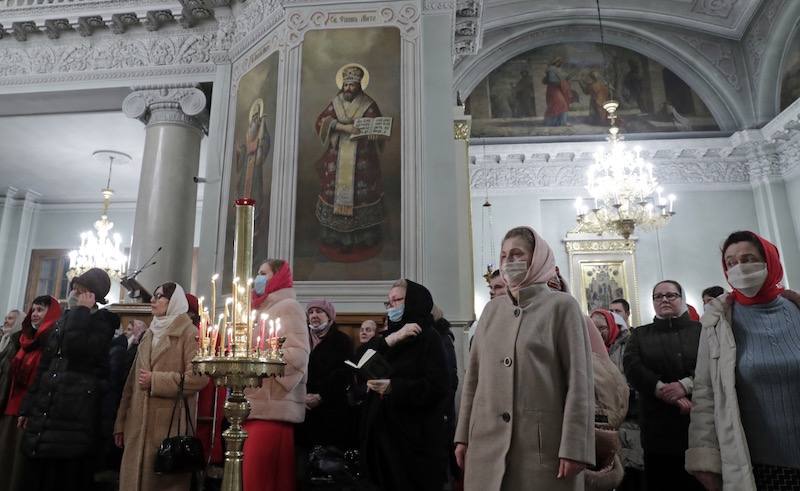 Russia's Catholic Church is following the lead of the Orthodox in its response to the Covid-19 pandemic.
The Church counting on local authorities not to use the crisis as a pretext for imposing new curbs on religious communities, according to a senior priest.
"At present, there's no unified, standardised federal regulation on quarantining across Russia at state level, and local rulers can make their own rules", said Mgr Igor Kovalevsky, secretary-general of the Russian Bishops Conference.
"Catholics here are generally aware of the seriousness of this problem – that it isn't confined to countries of the post-Soviet bloc, but that Western countries have similar restrictions.
"But there's been discussion as to whether churches should have closed, and some people are dissatisfied, not just here in Russia, but in other countries too."
The Moscow-based priest spoke as Orthodox Christians celebrated Easter on Sunday according to the eastern calendar.
In a Tablet interview, he said Russia's Catholic Church had encouraged members to accept local government regulations during the pandemic, and had not heard of any confrontations at places of worship.
He added that Catholic churches would reopen once their Orthodox neighbours took a decision to do so, and hoped the current crisis would have no lasting effect on the country's minority religious communities.
"The authorities have had to work much more with the Orthodox majority church, making sure it informs its faithful about quarantine rules", Mgr Kovalevsky told The Tablet.
"At present, the Catholic Church is developing peacefully and calmly in Russia, so we need not worry unduly. Our concerns reflect the same concerns as the Russian state."
President Vladimir Putin declined to attend the traditional Easter vigil in Moscow's Christ the Saviour basilica, as in previous years, although his spokesman, Dmitry Peskov, said he had lit a celebratory candle instead in the chapel of his Novo-Ogaryovo residence.
Meanwhile, in an Easter message, the Russian church's leader, Patriarch Kirill, urged Christians to watch Easter services on TV and refrain from visiting churches. "No outward restrictions should ever tear apart our unity and take from us the true spiritual freedom we have obtained," the patriarch added.
"Faith grants us strength to live and overcome all infirmities and tribulations with God's help, including those now part of our lives because of this dangerous virus".
Church leaders across Europe's 11 predominantly Orthodox countries issued similar appeals, although some insisted places of worship should also remain open for small congregations.
The Ecumenical Patriarch, Bartholomew I, called on Orthodox faithful to resist any "sense of alienation" from the "agonising decision" to close churches, adding that he believed the "unprecedented crisis" had "revealed the power and value of love and solidarity".
The 80-year-old patriarch said: "We must acknowledge and accept that these measures do not affect our faith – they do not at all diminish the centrality of the temple or its sacred services in the lives of our faithful.
"These temporary restrictive measures are not decisions against the church. They do not pertain to our identity as believers, but only to our identity as human beings that bear flesh and dwell in the world."
In Romania, a bishop from the Greek Catholic Church, which combines the eastern rite with loyalty to Rome, also defended the decision to close places of worship, but told The Tablet the Covid-19 restrictions had reminded Catholics of the "nightmare" of communist rule.
"For more than 40 years, we had no possibility to worship, still less to celebrate Easter or Christmas.
"We had nothing and lived clandestinely, and this was quite normal for us," Bishop Virgil Bercea of Oradea said in a Tablet interview.
"At that time, it was communism, and now it's the coronavirus. The situation is different, but the effect is the same, and the dangers are just as grave."
Bishop Bercea said the spread of "contaminations and deaths" had forced Romanian Christians to "pray at home", with churches, schools and universities now closed, and brought back painful memories.
"When the Catholic Church was forbidden under communism, we also had no priests and had to celebrate privately with our families", the bishop told The Tablet. "We're all in the same boat now, whether Catholics or Orthodox, and many of our believers are telling me the situation under communism has returned. This time, however, we hope it will all finish sooner."
Back to articles
Back to articles