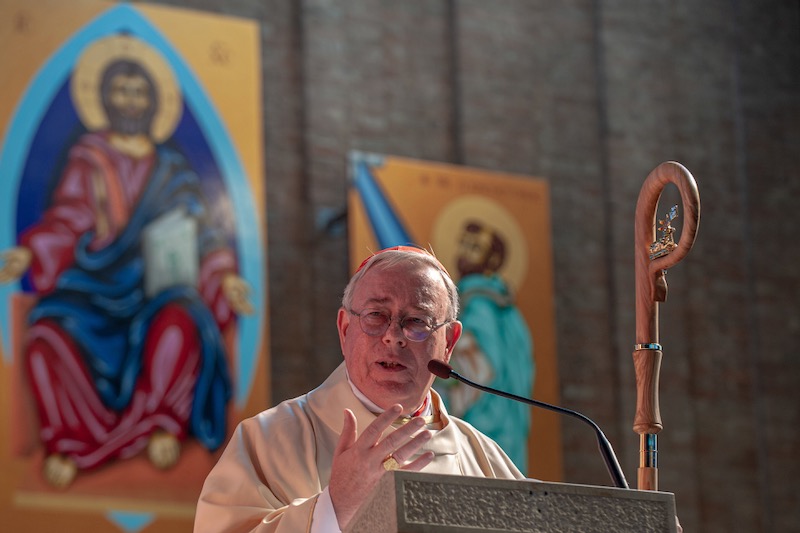 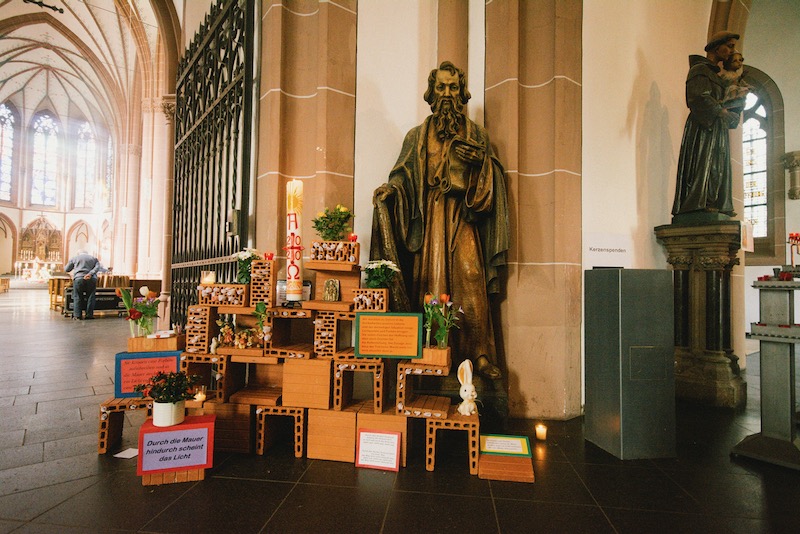 A stone blocks with Easter's messages are seen inside of St.Agnes church in cologne for Easter Monday in Cologne, Germany, on April 13, 2020.
Ying Tang/NurPhoto/PA Images

When on Wednesday 15 April German Chancellor Angela Merkel announced that church services and religious meetings would for the moment remain suspended on account of the coronavirus, the German bishops’ conference offered a dissenting viewpoint.

In a conference statement, the conference president Bishop Georg Bätzing of Limburg expressed his disappointment that the suspension of public religious services had not been lifted.

“This is difficult to understand in view of the relaxations in other fields of public life that have now been announced. We have accepted the suspensions up to now because we held them to be appropriate and wanted to contribute to preventing the spread of the coronavirus.

"However, the suspension of public religious services encroaches massively on people’s right to practise their religion freely and was particularly hard to bear for the faithful during Holy Week and the Easter Triduum,” Bishop Bätzing underlined.

Cardinal Rainer Mari Woelki of Cologne supported this view. One could not simply leave the Churches out when it came to relaxing suspensions, he underlined. “Now that (some of ) the suspensions are being lifted, the churches must be opened for public services,” he insisted.

Two days later on Friday 17 April, the religious communities in Germany met with representatives of the Federal Republic and the German states to discuss the suspension of religious services in view of the pandemic.

Fr Karl Jüsten, the Catholic Church’s liaison officer for relations with the state, told domradio.de afterwards that the Catholic Church had perhaps been more impatient to lift the suspensions than the other Christian Churches since partaking of the Eucharist was “decisive” for Catholic church life.

When celebrating Mass was once again possible, it was most important for Catholics to be able to partake of the Eucharist, he explained. Suggestions on how this might be possible under strict hygienic conditions were now under way, he said.

“Several suggestions have been made such as using toast tongs or laying the Eucharist out on the altar and allowing the faithful to take a host, or for the priest to use disposable gloves. What must be guaranteed under all circumstances is that the coronavirus is not spread when distributing communion.”

As religious faith and church services were most important in times of crisis, the discussions on how to reopen church services had been long and detailed, the head of Chancellery, Helge Braun, who is a medical doctor, told the General-Anzeiger. “We saw how at church services in Alsace at which there was a lot of singing, the coronavirus shot up at an incredible rate”, he recalled.

Meanwhile only 12 per cent of Germans are in favour of holding local church services during the crisis according to an “INSA Consulare” poll commissioned by the daily Tagespost. A clear majority of 70 per cent thus think it unnecessary.

The poll, which was conducted between 10 and 13 April, asked 2108 adults whether they agreed with the statement: “Local church services should be allowed during the corona crisis as they are part of primary care."