Criticism for government funding of US clergy 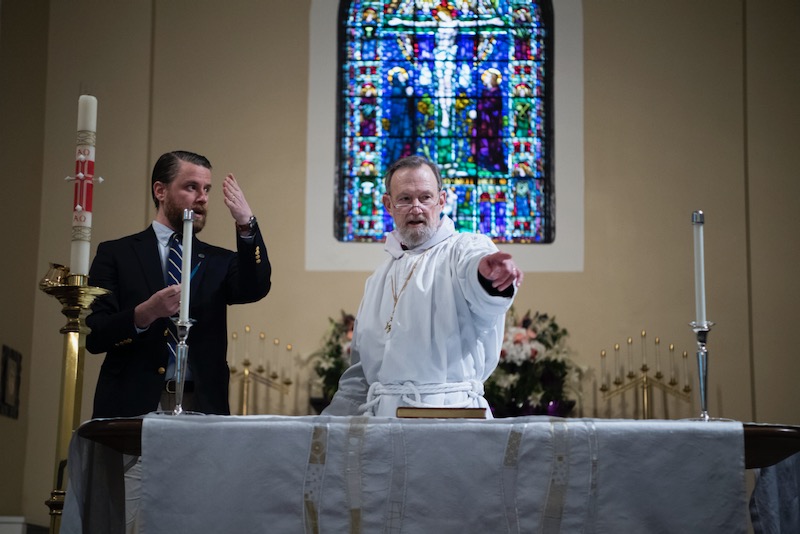 Fr. Rick Miles and Paul Shinkman, prepare for an Easter service to be streamed on Facebook, at Christ Church Washington Parish on Capitol Hill on Sunday.
CQ-Roll Call/SIPA USA/PA Images

Civil libertarians are criticising the decision of Congress to include religious organisations in the stimulus package passed into law two weeks ago. In addition to bestowing money on charities and social service agencies run by religious groups, the law covers payment of salaries to pastors and other ministerial personnel.

“Although it may not seem easy in times like these to tell those seeking aid that certain costs are not eligible for loan forgiveness, the bar on the government funding of religious activities is an important limitation that exists to protect religious freedom for all,” stated a letter sent to officials charged with implementing the programme from six progressive groups, including Americans United for Separation of Church and State. In 2009, President Barack Obama’s stimulus provided $140 million to social services run by churches, but did not extend to ministerial salaries.

Groups like Catholic Charities are stretched thin in certain areas hit hard by the coronavirus pandemic, especially New York City, Louisiana, Michigan, New Jersey and Washington state. Smaller charities qualify for the aid, but those with more than 500 employees do not. In many US states, Catholic Charities is the largest non-governmental provider of social services. The Catholic Health Association has called on the government to reopen the enrolment period for government insurance, known as Obamacare, but the Trump administration has refused to do so.

A few religious groups are claiming exemption from government “stay at home” orders, insisting that religious worship be considered an “essential service” like grocery stores. In Kansas, the Republican legislature overrode the Democratic governor’s ban on public worship services, but a judge ordered the ban reinstated just before Easter. In Kentucky, promises by some evangelicals to conduct public services led the governor to threaten an enforced 14-day quarantine of all attendees. No Catholic diocese conducted public religious services.

Meanwhile concern for immigrants being held in detention centres throughout the US has prompted calls for their immediate release. Catholic Charities is also calling for the government to relax all enforcement of immigration laws until the pandemic has passed for fear those who are sick will be too scared to come forward and seek treatment.

“We've been hearing from families that many detainees are getting sick,” said Kathy O’Leary with Pax Christi New Jersey. “There is no way to practise social distancing in the cells — the bunk beds are not 6 feet apart. They are not getting gloves, masks or hand sanitisers because it's considered contraband.” Government officials said there had been 18 Covid-19 cases at the New Jersey detention centre as of 8 April.

Sr Donna Markham, CEO of Catholic Charities USA, said: “First and foremost, we're seeking access to testing and Covid-19-related care for all, regardless of [immigration] status. This is a moral issue. This isn't just a migration issue at this point. It's a public health issue.” Catholic advocacy groups have also called for cash assistance to migrants akin to what is being provided citizens, as well as an automatic extension of all visas and other status-arrangements.