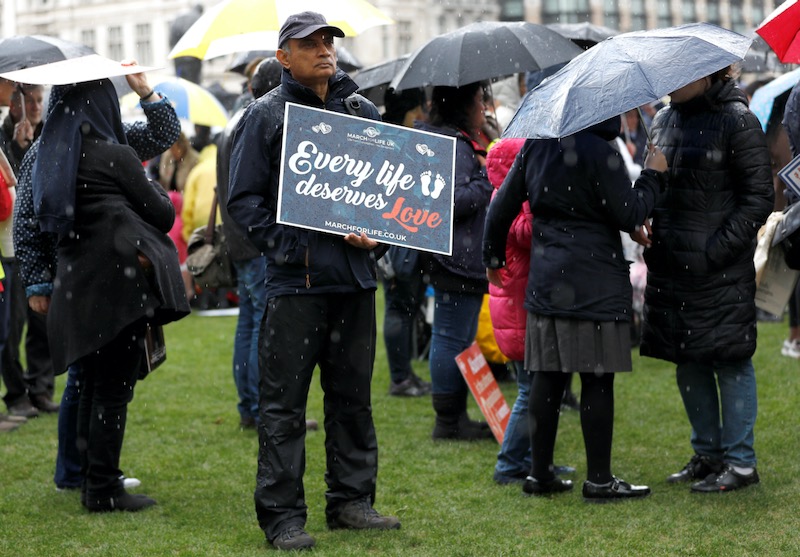 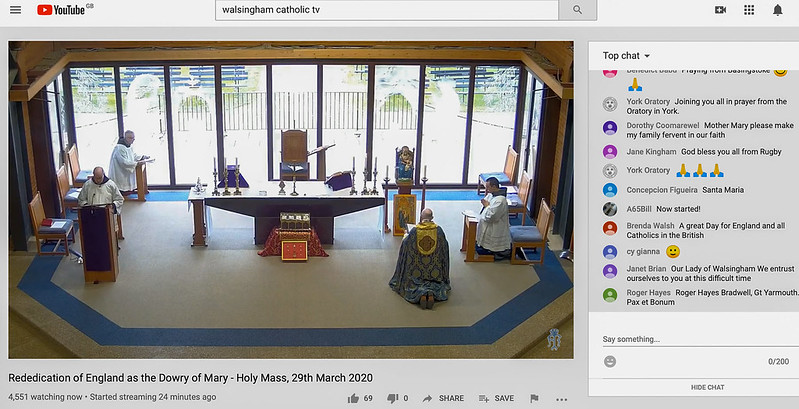 The Rededication of England as the Dowry of Mary was live-streamed online from Walsingham.
Walsingham Shrine

The Emeritus Archbishop of Southwark, Peter Smith, was buried on Monday at St George’s Cathedral, Southwark. Archbishop Smith died at the beginning of March after a short illness. Due to restrictions in place because of the coronavirus pandemic, the private graveside service was attended by a small number of family and clergy. It is hoped that a Mass in memoriam will take place later this year.

The Bishop of Ossory has invited people to email or text their prayer intentions to him while they cannot gather as a faith community to celebrate the Eucharist. In a pastoral letter Bishop Dermot Farrell said that the world was “convulsed” by the pandemic and people are learning about the fragility of their lives. “Solidarity and global action are absolutely crucial to bringing this pandemic under control,” he said, and he paid tribute to the “selfless dedication and the immense work” of those on the frontline, who do their work not only in times of great trial, but on ordinary days as well. He said prayer intentions would be remembered when people of the diocese come together to celebrate Mass via a broadcast on the local radio station each Sunday morning.

Churches in Northern Ireland are to benefit from a new grants fund aimed at promoting places of worship as tourism venues. Treasure Ireland is funded by the National Lottery Heritage Fund, the Pilgrim Trust, the Department of Communities and the National Churches Trust, a charity supporting and promoting places of worship used by Christian denominations throughout the UK. The project, which will run over three years starting in the summer of 2020, includes a new grants fund which will offer between £500 - £10,000 for repairs and maintenance to help keep churches of all denominations in good condition and so prevent expensive repairs.

New regulations governing the provision of abortion in Northern Ireland that came into effect this week have been strongly criticised by Church leaders and pro-life groups. The New Regulatory Framework for Northern Ireland will permit selective abortion for any disability including Down’s syndrome, cleft lip and club foot, up to birth. The Catholic bishops of Northern Ireland described the proposed legislation as “draconian”. The pro life charity Right To Life UK called on members of the legislative assembly to introduce legislation as soon as possible to repeal the new law.

Bishop Kenneth Nowakowski was enthroned as the new Bishop of the Ukrainian Catholic Eparchy of the Holy Family of London on Saturday. Cardinal Vincent Nichols presided in place of the head of the Ukrainian Greek Catholic Church, Major Archbishop Sviatoslav Shevchuk, because of restrictions in place during the pandemic. He told clergy at the Ukrainian Catholic Cathedral in London, “this cathedral might seem empty, but we know that in every act of worship angels and saints are present.”

The Scottish Child Abuse Inquiry has appealed for victims to continue to contact them despite the coronavirus outbreak halting public hearings for the time being. In a video message, the chair of the Inquiry, senior judge Lady (Anne) Smith, assured anyone who wished to contact the inquiry that they would remain able to do so by phone. The analysis of case studies relating to Catholic religious orders – the Christian Brothers, Benedictines and Marists – will continue, with the inquiry's findings to be published as soon as possible.

Volunteers serving around 2,000 refugees in camps around Calais say resources are being “stretched to the limit” during the coronavirus pandemic. The charities Care4Calais and People not Walls have joined French colleagues to urge the authorities to provide shelter and basic services. Some services have been suspended and charities are concerned about safeguarding the vulnerable population. Refugees often live three or four people to a tent, surrounded by mud and with limited access to fresh water. In one camp, hundreds live in a confined area with one tap and, currently, no soap, one volunteer told The Tablet.