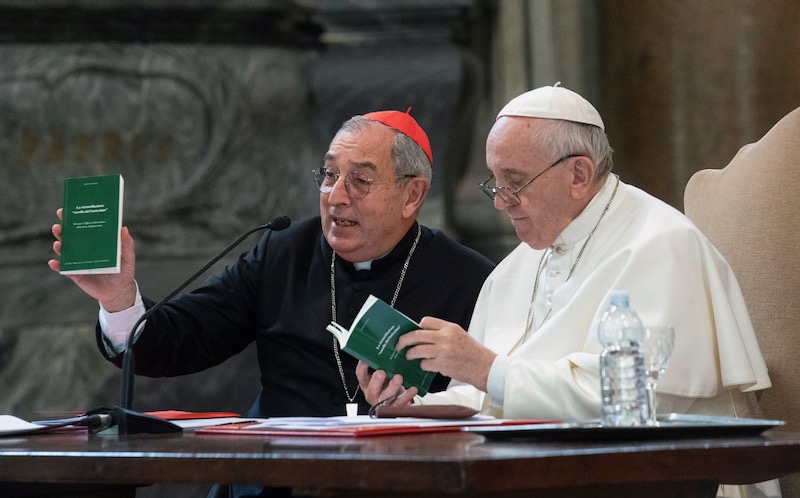 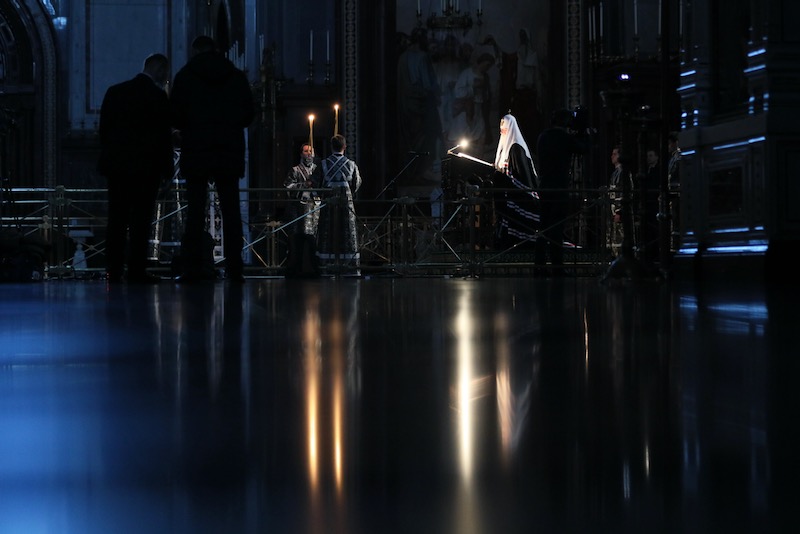 Patriarch Kirill (R) of Moscow and all Russia reading the Great Canon of Repentance by Saint Andrew of Crete and the Life of Saint Mary of Egypt during a morning prayer at the Cathedral of Christ the Saviour.
Gavriil Grigorov/Tass/PA Images

Ukraine's Greek Catholic Church has agreed to re-purpose its buildings as hospitals and care centres during the coronavirus epidemic, as other religious denominations also stepped forward with practical help in containing the crisis. “The Church's primary purpose is pastoral care, and our medical chaplains are already working in hospitals at this tragic time,” explained Fr Lubomyr Javorski, the Church's patriarchal economist. “But we also have many property resources which can be used during the pandemic. These can be converted into hospitals, but also made available to physicians away from their workplaces and to people returning from abroad with nowhere to quarantine themselves". The priest outlined the proposals in a video message, after a Sunday homily by Ukraine’s Greek Catholic leader, Archbishop Sviatoslav Shevchuk of Kyiv-Halych, offered to turn parishes, churches and monasteries into health facilities and rehabilitation centres. The Church’s Information Department confirmed the offer had been welcomed by the country’s premier, Denys Shmyhal, during talks with the archbishop.In his homily on 22 March, Archbishop Shevchuk said his Church would "do everything possible to prevent doctors having to decide who should live and die" due to a lack of medical supplies.

An Italian missionary bishop in Ethiopia is the first Catholic bishop known to have died of the global coronavirus pandemic. Bishop Angelo Moreschi, Apostolic Vicar of Gambella, Western Ethiopia, died in Italy on 25 March at the age of 67. The news was announced by the secretary general of Ethiopia’s bishops’ conference. A Salesian, Bishop Moreschi had been a missionary in Ethiopia since 1991 and bishop for 10 years. In Ethiopia, authorities are finding it difficult to stop people holding religious gatherings.

Poland's Catholic Church, which heavily depends on Sunday Mass collections and fees for ceremonies, has appealed for donations to keep its parishes and dioceses functioning. The Church's KAI agency ran a detailed account of how overall income had dropped 90 percent since mid-March, with worrying consequences for upkeep of buildings, staff pay, heating, charity work and other areas.

Four workers from a French Christian charity who were kidnapped in Iraq two months ago have been released, President Emmanuel Macron's office has announced. The three French and one Iraqi work for the French-based Catholic nongovernmental organisation SOS Chrétiens d'Orient. It supports Christian communities devasted by conflict, particularly since the rise of Islamic State in 2014. A statement released by Macron’s office on 27 March said, “the president expresses his gratitude to the Iraqi authorities for their co-operation”. The release came a day after France said it would withdraw its troops from Iraq due to the coronavirus pandemic.

The Catholic Church has praised the South Korean authorities and the response of the country’s people for becoming a “beacon country” in tackling the coronavirus. Bishop Lazarus You Heung-sik of Daejeon, president of the Commission for Social Affairs of the Episcopal Conference of Korea, said: “The administration asked for and obtained loyalty and help from the people and if we have become a symbol of hope for the world, it is because almost no one thought only of themselves.” South Korea has flattened the curve of new infections, winning global praise for its swift action, widespread testing and contact tracing, and support from citizens.

Catholic aid agencies have urged the evacuation of Syrian war refugees from camps in Greece to “avert a catastrophe” from the coronavirus. “More than 42,000 people are trapped in hopelessly overcrowded camps and horrific conditions” said Caritas Europe, Jesuit Refugee Service and more than 200 other organisations in a 24 March appeal. “There is no hope of containing any outbreak”, they added, and “we urge emergency action to guarantee the health and safety of asylum-seekers, local population and humanitarian aid workers on the islands”. The statement, addressed to heads of European Union institutions and Greek Prime Minister Kyriakos Mitsotakis, said recommended measures, such as social distancing and frequent hand-washing, are “simply impossible” in the camps. Caritas Europe reports that the Moria camp on Lesbos currently has a single water tap for 1,300 people, with no toilets, electricity, medical care or education.

Caritas Indiahas deployed an emergency task force to support the most isolated and disadvantaged populations, as India is in coronavirus lockdown. Food and health kits have so far been distributed to around 10,000 families of migrant workers, slum residents, and Dalits, many of whom have lost their daily wages due to the lockdown. Prime Minister Narendra Modi’s announcement last week, stopping all production activities and transportation, left marginalised groups worried about how they can survive, according to Caritas director, Fr Paul Moonjely. Modi’s speedy and sweeping lockdown left many of India’s 1.3 billion citizens jobless and hungry. Tens of thousands of migrant labourers fled shuttered cities, being forced to walk hundreds of miles to their native villages after transport was stopped.

India’s Christian Coalition for Health – including the Catholic Health Association of India – has written to Modi, offering the use of all health facilities and beds in Christian hospitals, totalling 1,000 hospitals and 60,000 in-patient beds.

In Indonesia, a country with the largest Muslim population in the world, Holy Week celebrations will be broadcast on state television and radio and several private stations. With public Masses suspended until 30 April, many Catholics from around the country had complained that live-streaming services were not ideal where Wi-Fi connection is still limited in remote areas and data transmission on smartphones expensive. Holy Week services on radio and TV were made possible after the Catholic Church negotiated with the government Minister of Communication and Information Technology, who is Catholic. Cardinal Ignatius Suharyo Hardjoatmodjo, Archbishop of Jakarta, will lead some of the Masses.

Outreach to people in shanty housing, and Catholic schools opening up as homeless shelters, are among the Catholic initiatives during the countrywide virus lockdown in the Philippines. Caritas Kindness Stations have been set up through diocesan social action centres and are locally-based to distribute food and hygiene kits to people in need, whilst still observing quarantine regulations. Fear of hunger is the main consequence of the coronavirus outbreak among the poor in Manila suburbs, according to Caritas. “These are the factory workers, vendors, traffic aides, delivery men and women, public utility drivers, fast food chain crew, informal dwellers, janitors, street sweepers, construction workers, and many other vulnerable sectors whose lives literally stopped when the limitation in mobility and interaction was enforced, in the hope of stopping the spread of the virus”, Fr Edwin Gariguez, Director of Caritas Philippines, said this week.

Bells tolled at many churches across France for 10 minutes last Wednesday evening, 25 March, in solidarity with medical personnel caring for coronavirus patients and for those who have already died from the disease. In several places, priests have blessed their city and its people in special rites. “It is in Lyon's tradition to express confidence in God and his hope,” said Bishop Michel Dubost, apostolic administrator of the diocese, who blessed the city from the Fourvière hill overlooking it. Other priests climbed to cathedral rooftops to bless the towns and cities below holding a monstrance.