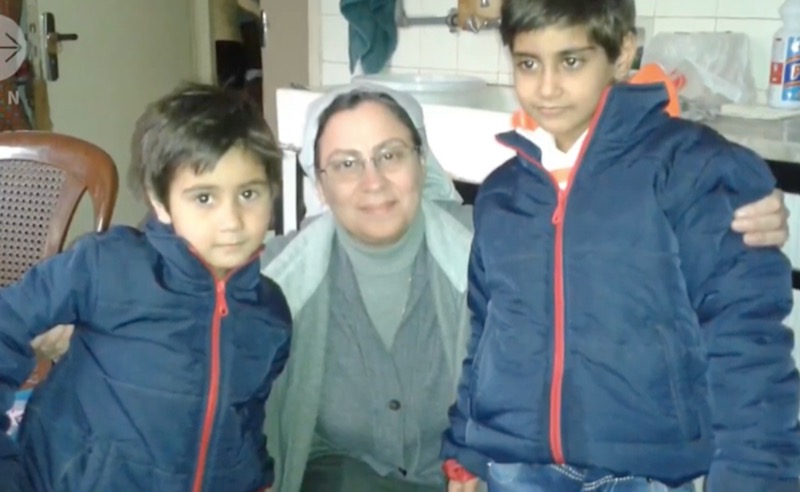 Nun in Syria speaks of ongoing need during corona crisis

Pope Francis: coronavirus is time for 'our judgement' 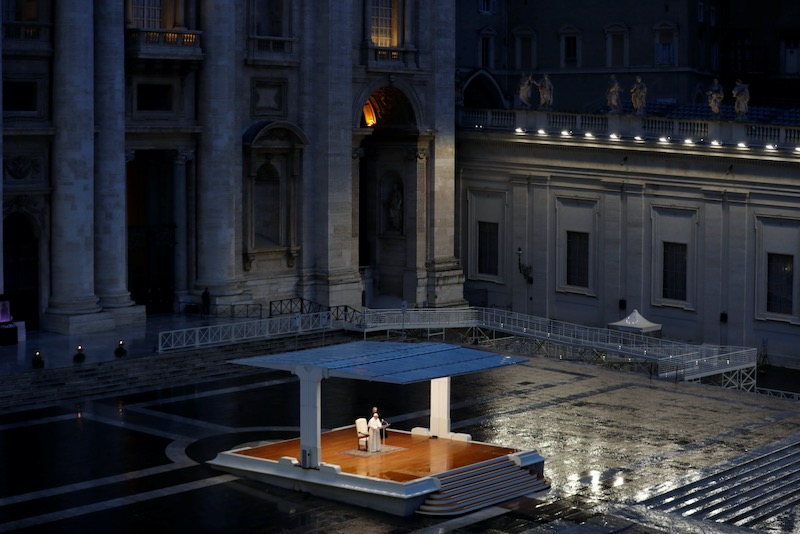 Pope Francis gives his extraordinary blessing "urbi et orbi" (to the city and the world) in an empty St Peter's Square at the Vatican March 27, 2020
CNS photo/Yara Nardi, pool via Reuters

Pope Francis this evening delivered a damning indictment of the modern, consumerist lifestyle and said the coronavirus crisis was the time of "our judgement", meaning a time for us to choose a different lifestyle.

Praising the "ordinary people" who have come to the fore in the crisis, helping the sick and vulnerable, the Pope called on society to get lives "back on track".

He said: "Greedy for profit, we let ourselves get caught up in things, and lured away by haste. We did not stop at your reproach to us, we were not shaken awake by wars or injustice across the world, nor did we listen to the cry of the poor or of our ailing planet. We carried on regardless, thinking we would stay healthy in a world that was sick."

The homily came as he delivered his extraordinary "urbi et orbi" message to the city and the world to an empty St Peter's Square, yet also to many thousands of people watching – and praying – online.

The pope granted a plenary indulgence to the faithful who watched or listened in to the hour-long broadcast, that began at 5pm UK time, 6pm Italian time.

The blessing followed Wednesday's Our Father, also delivered from St Peter's Square earlier this week, and also watched by hundreds of thousands online.

The Archbishop of Westminster Cardinal Vincent Nichols had earlier described the blessing as a"most extraordinary event" with the Pope immersed in prayer alone, and yet joined by millions as he prayed before an empty St Peter's Square, when normally he would be addressing a "great throng".

The “Salus Populi Romani” icon and the crucifix of St Marcellus were placed in front of the central door of St Peter’s Basilica and the Blessed Sacrament exposed on the altar in the atrium of the Vatican Basilica. An urbi et orbi blessing is usually given only immediately after a new pope's election and at Christmas and Easter.

National Catholic Register provided a translation of the homily, delivered in Italian with a sign language interpreter also on the video.

Pope Francis preached from the Gospel of St Mark, chapter 4, beginning with the text: “When evening had come.”

He said: "For weeks now it has been evening. Thick darkness has gathered over our squares, our streets and our cities; it has taken over our lives, filling everything with a deafening silence and a distressing void, that stops everything as it passes by; we feel it in the air, we notice in people’s gestures, their glances give them away.

"We find ourselves afraid and lost. Like the disciples in the Gospel we were caught off guard by an unexpected, turbulent storm. We have realised that we are on the same boat, all of us fragile and disoriented, but at the same time important and needed, all of us called to row together, each of us in need of comforting the other."

He said that while the disciples were alarmed, Jesus slept on soundly, trusting in the Father.

"This is the only time in the Gospels we see Jesus sleeping."

When he wakes up, after calming the wind and the waters, he turns to the disciples in a reproaching voice: “Why are you afraid? Have you no faith?”

Pope Francis said: "The storm exposes our vulnerability and uncovers those false and superfluous certainties around which we have constructed our daily schedules, our projects, our habits and priorities.

"It shows us how we have allowed to become dull and feeble the very things that nourish, sustain and strengthen our lives and our communities. The tempest lays bare all our pre-packaged ideas and forgetfulness of what nourishes our people’s souls; all those attempts that anaesthetise us with ways of thinking and acting that supposedly 'save' us, but instead prove incapable of putting us in touch with our roots and keeping alive the memory of those who have gone before us. We deprive ourselves of the antibodies we need to confront adversity."

Speaking of our "common belonging", as brothers and sisters, the pope continued to criticise the modern, consumerist lifestyle.

He said this is not the time of God's judgement on us, but our time to choose what is right.

Addressing the Lord directly, he said: "It is not the time of your judgement, but of our judgement: a time to choose what matters and what passes away, a time to separate what is necessary from what is not.

"It is a time to get our lives back on track with regard to you, Lord, and to others.

"We can look to so many exemplary companions for the journey, who, even though fearful, have reacted by giving their lives. This is the force of the spirit poured out and fashioned in courageous and generous self-denial. It is the life in the spirit that can redeem, value and demonstrate how our lives are woven together and sustained by ordinary people – often forgotten people – who do not appear in newspaper and magazine headlines nor on the grand catwalks of the latest show, but who without any doubt are in these very days writing the decisive events of our time: doctors, nurses, supermarket employees, cleaners, caregivers, providers of transport, law and order forces, volunteers, priests, religious men and women and so very many others who have understood that no one reaches salvation by themselves."

Embracing the cross means finding the courage to embrace all the hardships of the present time, the Pope continued, "abandoning for a moment our eagerness for power and possessions in order to make room for the creativity that only the Spirit is capable of inspiring."