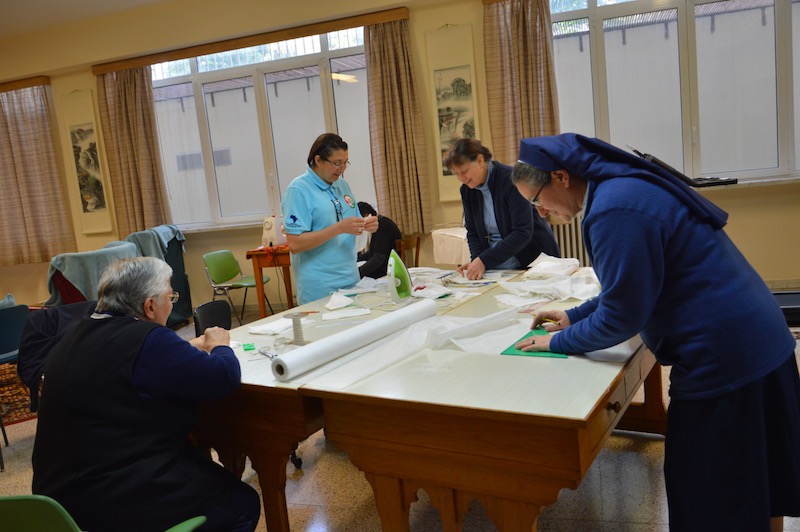 Ponte San Pietro (Bergamo). Military and medical personnel of the Army together with the Carabinieri transport the coffins with the use of six trucks from a depot in Ponte San Pietro due to emergency COVID19 Coronavirus
Carlo Cozzoli/IPA MilestoneMedia/PA Images

An Italian priest has died of the coronavirus after giving his respirator to a younger patient also suffering from the virus.

Fr Giuseppe Beradelli, parish priest of San Giovanni Battista since 2006, died in the early hours of Monday 16 March, in the hospital of Lovere, Bergamo.

Aged 72, he had been hospitalised for several days due to a coronavirus infection, and his parish community had bought him a respirator to aid his fight against the infection. According to hospital sources, reported by Italian media, Fr Beradelli had voluntarily given up his respirator so a younger patient without one could use the device. Fr Beradelli, who did not know the younger patient, died shortly afterwards.

Born on August 21, 1947, and ordained priest on June 30, 1973, Fr Beradelli was well known among his parishioners for his good humour, his love of motorbiking, and his devotion to the Virgin Mary. Due to the risk of infection, no funeral has yet been held for Fr Beradelli; his passing was marked instead by residents of the medieval town giving a round of applause from their balconies at noon on March 16.

Bergamo Diocese is located in and around some of the areas of Italy hardest-hit by Coronavirus; at least 16 of the more than 30 priests reported as deceased due to the coronavirus are from that northern diocese. Due in part to an unusually elderly population, the hospitals of Bergamo have been placed under severe strain by the outbreak, with reports of 50 to 60 admissions for pneumonia every day.

Italy has reported a total of 6,078 deaths from 63,928 coronavirus infections, amounting to a fatality rate of around 9 per cent, the worst death rate of any country with a coronavirus outbreak. This figure is likely due to the way that Italy has decided to test for the virus, with only serious cases qualifying for a test at all.

In the UK, 335 patients have died out of 6,650 confirmed cases of coronavirus, and, much like in Italy, Masses have been suspended across the country.

UPDATE: CNA reports that the secretary of Beradelli's diocese and a personal friend of the deceased priest has questioned the accounts of Fr. Beradelli giving a donated respirator to another patient. Whilst it is possible that Beradelli gave up his respirator for a younger person, this has not been confirmed, and the respirator itself would not have been a donated one.

How are you managing during lockdown? Email us your stories, and any pictures you are willing to share, and we will post them on a blog.

The Tablet has a list of churches live-streaming Holy Mass and other resources for Catholics during the Covid-19 pandemic. Email us anything you wish to be added