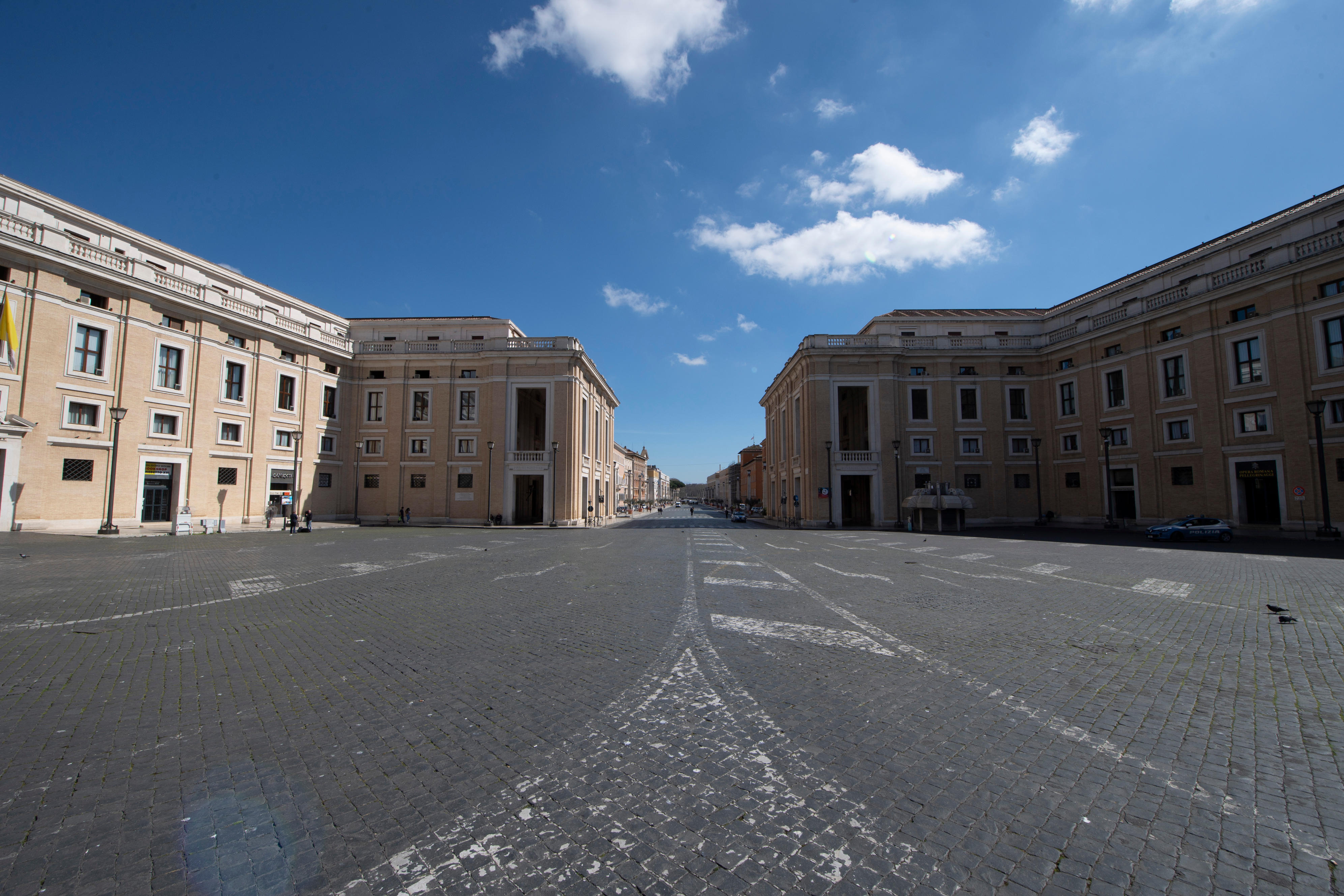 Pope's Holy Week to go ahead without people

Pope Francis thanks priests of 'a thousand ways' 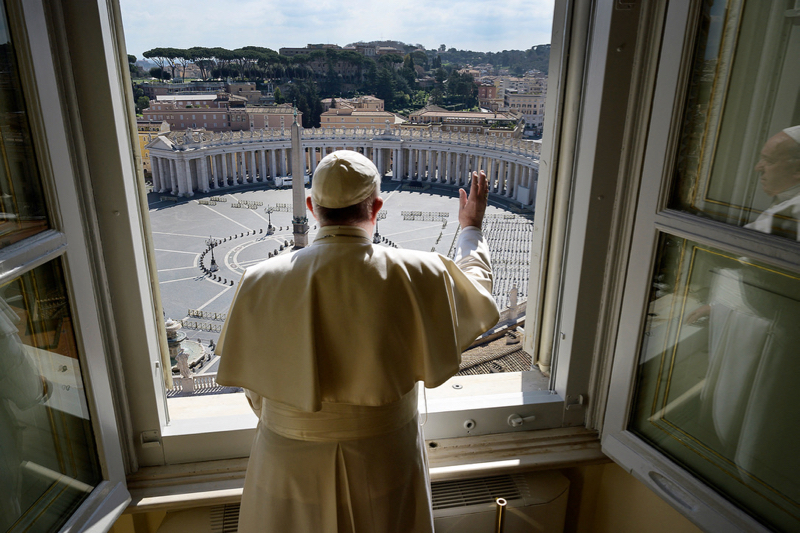 Pope Francis blesses an empty Saint Peter's square after he delivered the angelus by video in the Apostolic Library at the Vatican.
ABACA/ABACA/PA Images

Pope Francis has thanked Catholic priests who are thinking of "a thousand ways of being close to the people" during the coronavirus epidemic.

He spoke as Italian media reported over the weekend that as many as seven Catholic priests are believed to have died from the virus. Italy is the worst hit country in Europe to date, with 24,747 cases and 1,809 deaths. A further 1,672 cases are in serious or critical condition.

Afterwards, in the afternoon, he went on a 90-minute pilgrimage through the empty streets of Rome to pray for the people, at the icon of Maria Salus Populi Romani at the Basilica of St Mary Major and also at the foot of the wooden crucifix said to have protected Rome from the plague of 1522.

In the Angelus at St Peter's yesterday, delivered to a virtual audience with the square itself emptied of pilgrims, Pope Francis described what had been happened in the most affected region of Italy.

He spoke as the Archbishop of Milan, Mario Enrico Delpini, was also celebrating Mass: "The Mass that the archbishop is celebrating in the polyclinic for the sick, doctors, nurses and volunteers is ending at the moment in Milan.

"The Archbishop is close to his people and also close to God in prayer. I am reminded of last week's photograph: he alone on the roof of the Duomo praying to the Madonna. I would also like to thank all the priests, the creativity of the priests." 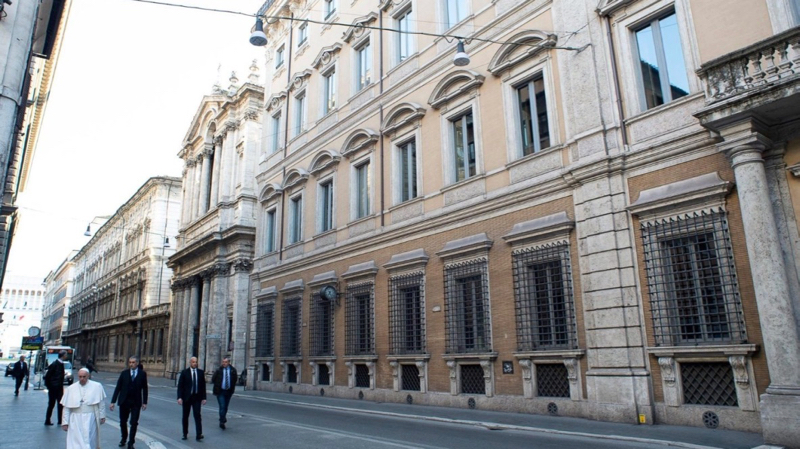 Referring to the cowardly priest who is a character in Manzoni's classic Italian novel The Betrothed who refuses to marry the couple after being threatened, Pope Francis praised "priests who think a thousand ways of being close to the people, so that the people do not feel abandoned; priests with apostolic zeal, who have understood well that in times of pandemic 'Don Abbondio' should not be done. Thank you very much to you priests."

He concluded: "May Mary Most Holy help us to cultivate the desire of Christ, the source of living water, the only one who can satisfy the thirst for life and love that we carry in our hearts."

After the Angelus, he greeted all the virtual pilgrims watching and listening.

"These days Piazza San Pietro is closed, so my greeting goes directly to you who are connected through the media.

"In this pandemic situation, in which we find ourselves living more or less isolated, we are invited to rediscover and deepen the value of the communion that unites all members of the Church."

Pope Francis continued: "United with Christ we are never alone, but we form a single body, of which he is the head. It is a union that is nourished with prayer, and also with spiritual communion in the Eucharist, a highly recommended practice when it is not possible to receive the sacrament. This I say for everyone, especially for people who live alone.

"I renew my closeness to all the sick and those who care for them. As well as to the many operators and volunteers who help people who cannot leave the house, and to those who meet the needs of the poorest and homeless. Thank you so much for all the effort each of you make to help in this very hard time."

After wishing everyone a good lunch, and having lunch himself, he then went walking and praying through the city's deserted streets.

Matteo Bruni, of the Holy See press office, said: “This afternoon, just after 4pm, Pope Francis left the Vatican and made a private visit to the Basilica of St Mary Major, to offer a prayer to the Virgin Mary, Salus Populi Romani, where her icon is kept and venerated.

"Then, after taking a walk along the Via del Corso – as if making a pilgrimage – he visited the church of San Marcello on the Corso, where a miraculous crucifix is housed. In 1522 it was carried in procession throughout the neighbourhoods of the city so that the 'Great Plague' might cease in Rome. With his prayer, the Holy Father pleaded for an end to the pandemic that has struck Italy and the world. He also implored the healing of the many sick people, remembered the numerous victims of these past days, and asked that their families and friends might find consolation and comfort.

"His prayer intention was also extended to healthcare workers, doctors, nurses, and all those working in these days to guarantee the smooth functioning of society."