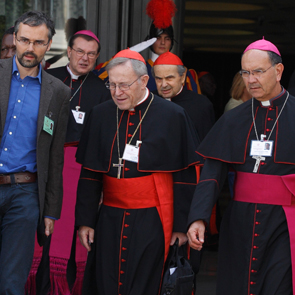 The Christian world looks to the Catholic Church to stem the tide of Islamic militancy, the Anglican former Bishop of Rochester, Michael Nazir-Ali, has said.

Bishop Nazir-Ali told clergy of the Ordinariate of Our Lady of Walsingham at a plenary meeting in London that non-Catholics, including Evangelicals who would not previously have heeded Rome, now looked to it to speak out on behalf of persecuted Christians worldwide.
"So the Catholic Church has both a great opportunity and also a great responsibility,” he said.

The Catholic-educated Pakistani-born bishop, who has both a Christian and a Muslim family background, spoke to members of the ordinariate at St Patrick’s in Soho, London, about global Christianity, the rise of Islamic militancy and the ideologies that led to the persecution of Christians in areas such as the Middle East.

The first non-white diocesan bishop in the Church of England, Nazir Ali stood down as bishop of Rochester in 2009 to devote more time to standing up for persecuted Christians, and set up the Oxford Centre for Training, Research, Advocacy and Dialogue (OXTRAD).

He urged the Catholic Church not to “capitulate to culture” nor to succumb to a weakening of discipline that he said had “caused havoc” within the Anglican Church. He said that he had watched the growth of the ordinariate with close interest.

“Allowing Anglican patrimony to flourish should not just be taken as an exception, but it could be a charter for the future,” he said.