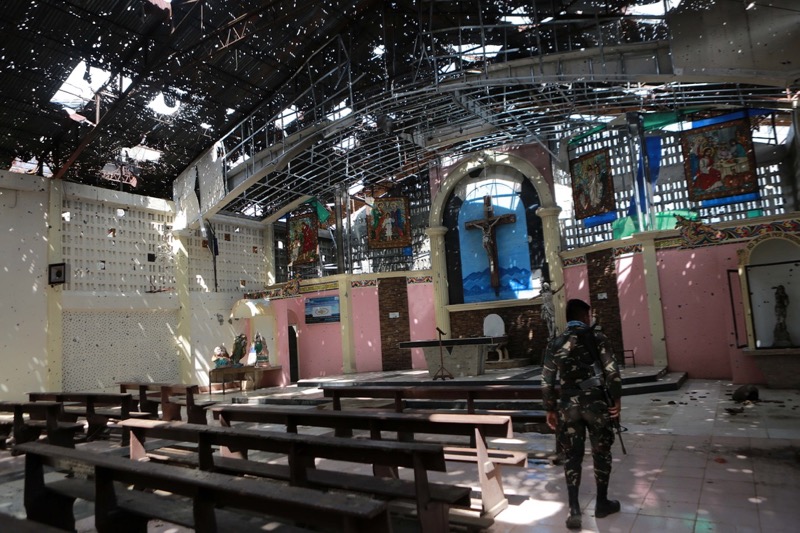 Querida Amazonia is a cry from the heart to protect the environment of the Amazon region. 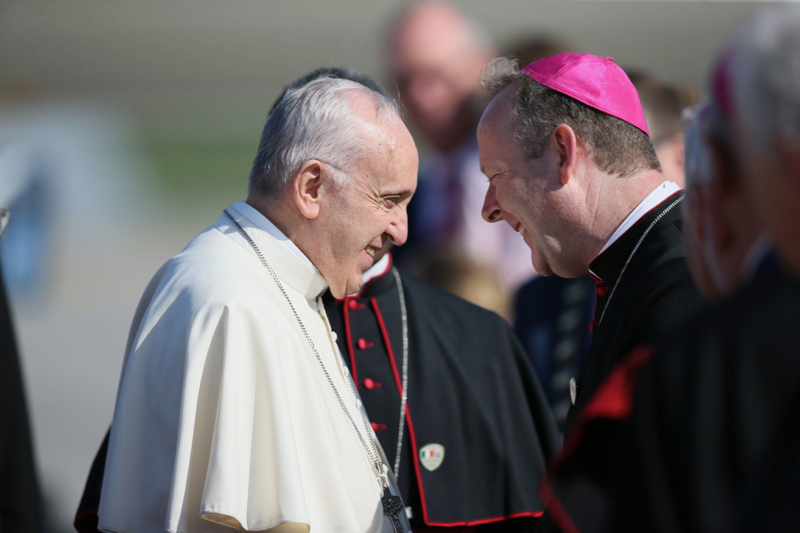 Pope Francis is greeted by Archbishop Eamon Martin as he arrives at Dublin International Airport, at the start of his visit to Ireland in 2018.
Brian Lawless/PA Archive/PA Images

The head of the Catholic Church in Ireland, Archbishop Eamon Martin, has said he is “very much open” to the ordination of married men as priests and that Pope Francis didn’t “shut the idea down” but left it open for further discussion within the Church.

In an interview with RTE Radio’s Morning Ireland programme about the 94-page exhortation, Querida Amazonia, the Archbishop of Armagh said: “I think this question is very much still open.”

He added: “I am very much open to the idea of this and I think Pope Francis is too” but the Pontiff “chose not to mention” the priestly ordination of married men in the letter as he realised that it is a question where there is a lot of “divided thinking”.

“It’s been said he refused this or refused that; he’s actually left the question. I think that he’s done that in order to encourage all of us to focus on much bigger questions about Church ministry, organisation, the involvement of lay people in the Church, the involvement of women in the Church, and he calls on the local Church there to actually officially recognise these roles in a way which it hasn’t done until now.

“I understand that there has been disappointment, and a lot of people feeling that perhaps this was a moment at which Pope Francis was going to express his views on the ordination of married men as priests. But I think Pope Francis would be disappointed if this is the issue that we are all talking about today,” Archbishop Eamon Martin said.

The Archbishop, who has recently returned from visiting two of the countries of the Amazon region, Peru and Ecuador, stressed that the exhortation is a huge cry from the heart to try to protect that region which is being “cruelly destroyed by the exploitation of its resources, by the destruction of its natural beauty and its life”.

The Pope, he said, was underlining that the whole world has a responsibility to try to preserve the equilibrium of the planet which so much depends on the health of the Amazon and the eco systems there.

Asked about the vocations crisis in Ireland, Dr Martin indicated that the situation was considerably different to where the Amazon is at. He also suggested that more Irish priests should go to the Amazon as missionaries.

“I know that we think we are very short of priests but I think a church which loses it missionary spirit and its missionary zeal is a church which is dying. And I think that is what Pope Francis is saying to us. Stay missionary, get out there, go and help these people.”

However, Fr Paddy Byrne, a popular parish priest in the Diocese of Kildare and Leighlin told the same RTE programme that he was “taken aback” and “disappointed” by Pope Francis’ refusal to approve the ordination of married men to address a priest shortage in the Amazon.

Fr Byrne said about 85 per cent of priests in Ireland shared his sense of disappointment. “We are not far away from the reality of what is being felt by the people of the Amazon region,” he warned and highlighted that there are "probably more bishops in Ireland at the moment" than there are young men in formation for priesthood.

“So if we don’t change we are facing the exact same (as the Amazon),” he told RTE.

Separately, a priest who is married but hasn’t been laicised told The Tablet that his immediate reaction to the Apostolic Letter was “one of disappointment” but “that just forced me to read Querida Amazonia”.

Sixty-two-year-old Liamy McNally was ordained for the archdiocese of Tuam in 1985, but two years later fell in love and left public ministry. He has never left the priesthood. He lives three miles from the Co Mayo town of Westport which has a population of about 5,500. In this small area, he knows six married priests, only one of whom is in ministry. A former Columban missionary, the priest married a nun and they both became Anglicans, serving in the local Church of Ireland.

“I found Querida Amazonia poetic, encouraging and deeply challenging,” McNally said and added the Pope had stated at the outset that he was not going to deal with all the issues raised at the Synod.

“I guess if he dealt directly with the question of married clergy then that would have be the ‘story'. The major issues facing the Amazon would have become footnotes. He obviously didn’t want that so he is leading us deeper into the challenges of the Amazon region.”

Describing the document as “wildly rich and in many ways, revolutionary, even without reference to married clergy”, Liamy McNally noted Para 105 which states, “…In its earliest days, the Christian faith spread remarkably in accordance with this way of thinking, which enabled it, from its Jewish roots, to take shape in the Greco-Roman cultures, and in time to acquire distinctive forms. Similarly, in this historical moment, the Amazon region challenges us to transcend limited perspectives and ‘pragmatic’ solutions mired in partial approaches, in order to seek paths of inculturation that are broader and bolder.”

According to Liamy McNally: “Some people believe that when Pope Francis appears to be closing one door he is preparing to push open a bigger door. It will take time to digest what has been written and then we’ll see what happens.”

Asked about Archbishop Eamon Martin’s comment about being “open” to the question of married priests, McNally responded: “So are most people. Any survey will show that. The issue is when will the Irish Bishops Conference start discussing it? We need to move from being ‘open’ to deeper, public discussion and examination of what the possibilities are.”

Elsewhere, Colm Holmes, Chair of We Are Church International, also praised the Pope for his “wonderful dreams for social, cultural and ecological issues in the Amazon.”

Dublin-based Holmes said: “We agree with the Pope that our church has significant responsibility for promoting immediate and significant changes in how the earth’s resources and the lives and cultures of indigenous people are protected. We urge all people to live in ways that reflect good stewardship of our planet, and the fact we are all one human family.”

However, he went on to say: “It is tremendously disappointing that Pope Francis could not bring the same vision to how our church serves the people of the Amazon region, and indeed all people. Despite the explicit request of the bishops and people from the area, the Pope failed to open priesthood to married men or to consider ordaining women to the diaconate.

“He proposes vague ‘new forms of service’ for women, but reaffirms the ban on women from ordination, thereby ensuring additional responsibility without accompanying authority.”

He said the Pope’s dreams for changing church structures in the Amazon are “discouragingly lacking in specifics. After seven years in office, it seems he talks the talk but does not walk the walk when it comes to enabling the church to fully address the real needs of its members.”