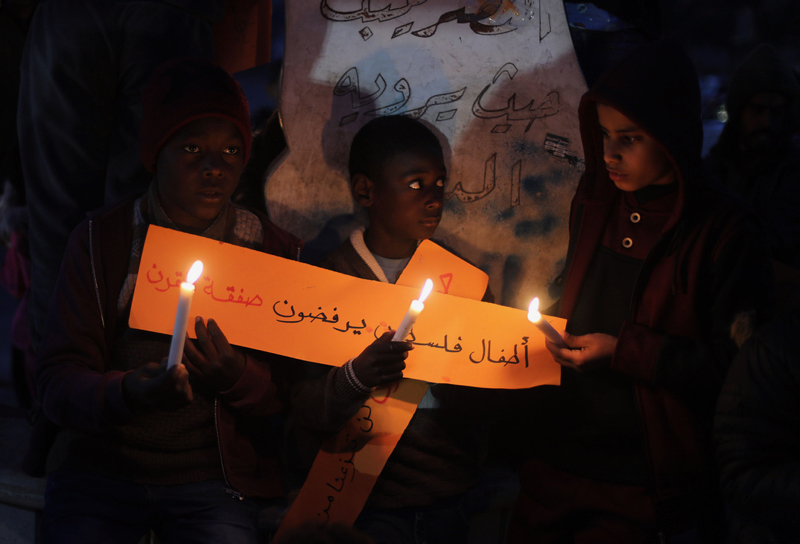 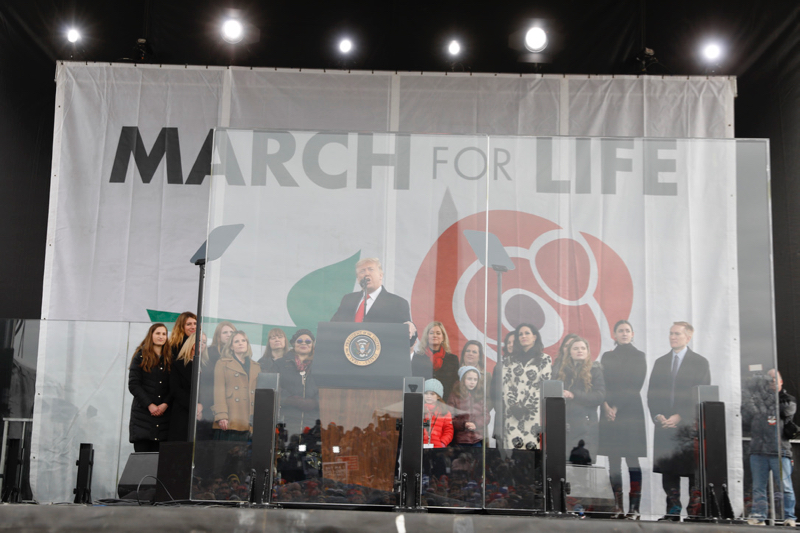 President Donald Trump became the first president to address the annual March for Life in person last week (writes Michael Sean Winters). The annual march commemorates the 1973 Supreme Court decision, Roe v. Wade, which established a constitutional right to procure an abortion. It draws tens of thousands of pro-life advocates to the National Mall in Washington, DC, where they hear from speakers before marching to the Supreme Court building. “It is my profound honour to be the first president in history to attend the March for Life,” the president began. “We are here for a very simple reason: to defend the right of every child, born and unborn, to fulfill their God-given potential.”  The president then turned very partisan in his remarks, which is not typical of the speeches at this event. “Sadly, the far left is working to erase our God-given rights, shut down faith-based charities, ban religious leaders from the public square, and silence Americans who believe in the sanctity of life,” Mr Trump said. “They are coming after me because I am fighting for you and we are fighting for those who have no voice. And we will win because we know how to win.” Members of the Catholic hierarchy did not join the president on the stage during his speech. The theme of this year’s march was “Life Empowers: Pro-life is Pro-Women.” Some women objected to the president’s participation because of his history of misogynistic comments. Kim Daniels, former spokesperson for Cardinal Timothy Dolan when he served as president of the U.S. bishops’ conference tweeted: “The pro-life movement stands for women and unborn children; for the dignity of each and every person; for our shared responsibility to care for the vulnerable. Building up a culture that supports these principles means holding up leaders who do as well.”

Czech authorities have agreed to rebuild a giant statue of the Virgin Mary in Prague's Old Town quarter, more than a century after it was torn down by anti-Catholic demonstrators during Czechoslovakia's independence (writes Jonathan Luxmoore). “I thank all those who've seen in this column's proposed restoration a symbol of reconciliation and call for mutual forgiveness of grievances and mistakes", Cardinal Dominik Duka, the Czech Primate, told the City Council in a letter. "In the situation of a divided society, disturbed by chaotic ideologies, human and Christian friendship should prevail." The Dominican archbishop was reacting to the Council resolution, adopted last week by 65 votes to 34 to allow the column's rebuilding after several years of heated debate. He said the ruling was a reminder of the need to see past decisions "in the historical context of times and possibilities", and should not be viewed as a victory or defeat by either side. The 16-metre baroque column, erected by Prague's inhabitants in thanksgiving for their city's survival after a 1648 Swedish Army siege, was destroyed as a symbol of Habsburg domination by an anti-clerical mob in November 1918. Czech newspapers said funds for its reconstruction had been collected by a Catholic committee since communist rule collapsed in the 1989 Velvet Revolution, adding that the country's Protestant churches had pledged not to oppose the project in return for the reinstalling of a gold chalice, symbolising the Reformation, on the facade of a nearby Catholic church.

Some churches in three provinces of China have suspended community activities, including Masses, over fears of the coronavirus spreading. Masses are cancelled in Wuhan – the virus hotspot - and other Hubei cities. Hankou Diocese in Hubei province has closed all parishes. St Ignatius Cathedral of Shanghai Diocese is closed temporarily, with no prayer services during celebrations of the Lunar New Year. Ningbo Diocese in Zhejiang province has instructed that “Church members shall receive the Eucharist in their hands”. An unidentified Catholic layman in Hebei told UCA news that he is “worried that the authorities will use this to crack down on the Church" as church meetings and gatherings may be officially banned. The virus has claimed the lives of more than 80 people in China.

A Nigerian seminarian was freed by his kidnappers on 18 January, 10 days after being abducted. After being found badly injured on the side of a road, he is being treated in the intensive care unit of Kaduna’s Catholic hospital. Three seminarians taken with him remain in captivity. On 21 January, Boko Haram Islamist terrorists murdered Revd Lawan Andimi, Chairman of the Christian Association of Nigeria in Adamawa State.

Peru’s Catholic bishops have called for the country’s newly elected politicians, “to make a commitment to reconnect politics to citizens’ concerns”. This means addressing “citizens' insecurity, family violence, femicides, and unemployment", they said. Peruvians went to the polls last weekend to elect a new Congress after President Martin Vizcarra called snap legislative elections in a bid to end a political crisis between the Executive and Congress. The move was popular and came 15 months ahead of the next general election.

Four aid workers from a French Christian charity are missing in Iraq, with authorities from both countries investigating their disappearance. The French NGO, SOS Chrétiens d'Orient confirmed three French and one Iraqi national went missing in Baghdad on 20 January. All four had prior experience in crisis zones. They were in Baghdad primarily for administrative reasons, to renew visas and register the charity with the Iraqi government. They disappeared driving between two meetings, including the opening of a new school.

After years of speculation about the use of a prime property in the Rwandan capital Kigali, formerly occupied by a prison, it looks set to accommodate a new Catholic cathedral. Located in Kigali’s Central Business District, the 90-year-old prison, known as “1930”, closed two years ago. The Church has been asked to deliver a design incorporating the old edifice into the new building. The new cathedral will be the seat of Kigali Archdiocese. When its new head, Archbishop Antoine Kambanda of Kigali, was installed last year he told the congregation - including President Paul Kagame - that it was time to have a cathedral that matched the beauty and modernity of the city of Kigali.

Pope Francis on Thursday last week announced Cleveland Bishop Nelson Pérez will replace Charles Chaput as Philadelphia’s next archbishop, making him the first Hispanic leader of the region’s 1.3 million-member archdiocese. He will be installed at a Mass at the Cathedral Basilica of SS. Peter and Paul on 18 February.

Australia’s Catholic Church is trying to prevent one of its own priests from suing it for abuse while he was an altar boy. The unnamed plaintiff – believed to be the first Catholic priest in Australia to bring a lawsuit against the Church for child abuse – claims that he was sexually abused in the 1960s while a student in a Catholic boarding school. His alleged attacker, the late Clarence Anderson, was a priest and a teacher, and gained access to him when he was serving as an altar boy. Eleven of Anderson’s alleged victims are seeking compensation from the Diocese of Lismore. The Diocese claims too much time has elapsed since the alleged abuse to allow for a fair trial, and has threatened to hold the plaintiff responsible for court costs if he does not withdraw his allegations.

Poland's Catholic bishops have disowned an ethnic Polish former prelate, Archbishop Jan Lenga of Kazakhstan, after he told an interviewer be believed Pope Francis was "preaching falsehood and sin". Fr Pawel Rytel-Andrianik, the conference spokesman, said: "Archbishop Lenga was and is not a member of the Polish Bishops’ Conference, and his statements cannot in any way be identified with it. It is a matter of regret that Archbishop Lenga is appearing in the media and leading the faithful into error, but he does not represent the Catholic Church in Poland". The Church official was reacting to a series of media statements by the 69-year-old retired Ukrainian-born archbishop, who quit his Kazakhstan see in 2011 and now lives in Poland.

Mexican authorities stopped a group of mostly Honduran migrants from entering Mexico last week. Mexican immigration agents and the National Guard formed a human shield to prevent them from entering the country. The new migrant caravan left San Pedro Sula, Honduras on 15 January. Mexican authorities encouraged the migrants to hand themselves in to be processed for asylum. However, the group pushed ahead. On Thursday, the final 800 people who had managed to enter Mexican territory were loaded on to buses. At a Mass on 26 January Jaime Calderón, the Bishop of Tapachula, Chiapas, urged Mexicans to understand the motivations of people fleeing Central America. Tapachula is close to the border crossing where the migrants were turned back.

A Venezuelan priest who disappeared earlier this month was found dead on 21 January. The Diocese of San Cristóbal released a statement confirming that Fr Jesus Manuel Rondon had been investigated for sexual abuse of a minor. Venezuelan authorities have arrested the 17-year-old, who confessed to killing Rondon. The Minister of the Interior, Justice and Peace, Néstor Reverol, said in a press conference, “We will continue the investigation until we have all the details of the case. There are perpetrators of the pedophilia in the Catholic Church and they act with the complicity of some of their authorities.”

The field of candidates for Bolivia’s 3 May presidential election is becoming clear. Interim president Jeanine Añez announced her candidacy on 24 January. The Movement for Socialism (MAS) party of ousted president Evo Morales, who is living in neighbouring Argentina, named former economy minister Luis Arce Catacora as their presidential candidate. Morales is still deeply involved in MAS. “In the face of uncertainty, let us try to be artisans of peace, artisans of reconciliation and artisans of the common good," Eugenio Scarpellini, Bishop of El Alto, said on Sunday last week.

US Vice President Mike Pence met Pope Francis in the Vatican at noon on 24 January. The two spoke together in private for an hour, a long time for an audience with someone who is not a head of state. The Vatican did not issue a press statement afterwards. The vice president’s office said Pence and the Pope talked about the crisis in Venezuela and displaced religious minorities in the Middle East.