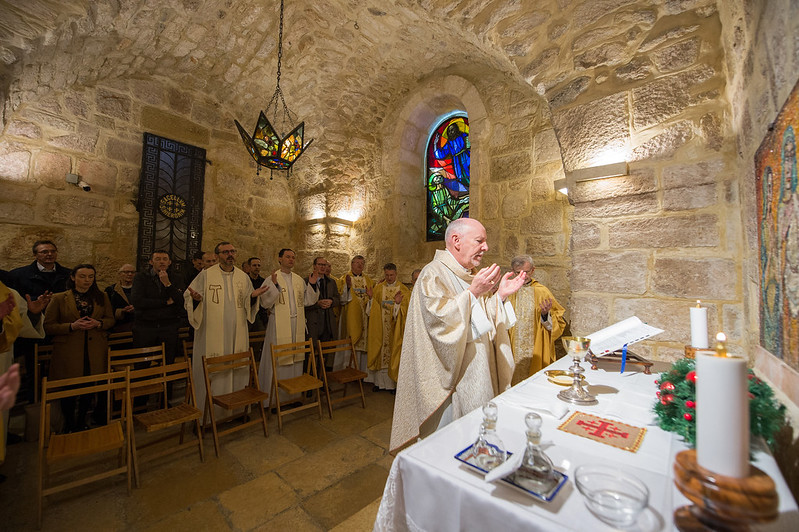 Mgr Canon Philip Moger has been named the next Rector of the National Shrine of Our Lady of Walsingham in Norfolk. He is due to replace Mgr John Armitage, who has been rector for the past five years, at the end of his term in September. Mgr Moger is currently parish priest at St John Vianney church in Leeds. His bishop, Marcus Stock, said he was reluctant to see him leave the parish, but “delighted that we have a priest of such talent and ability leading one of the Catholic Church’s important national institutions.”

The Church of England’s House of Bishops has restated its ban on blessing both gay and opposite-sex civil partnerships. A statement issued last week in response to the Civil Partnership (Opposite-sex Couples) Regulations 2019 said the Church teaches that marriage is between a man and a woman, and that sexual relationships outside this “[fall] short of God’s purposes for human beings.” Civil partnership legislation was ambiguous, the bishops said, and so: “We do not believe that it is possible for the Church unconditionally to accept civil partnerships as unequivocally reflecting the teaching of the Church.”

Lord Alton, a crossbench peer and Catholic, has urged the Prime Minister Boris Johnson to make domestic poverty a priority in the wake of Brexit. Writing for Global Intelligence Services, Lord Alton also said that “a priority will be to test the central claim that departure will enable a hobbled, emasculated Britain to regain its place in the world by strengthening its relationships with the United States, the Commonwealth, and developing economies.” He said that moral capitalism, paired with inspired and ethical leadership rather than “survival of the fiercest” is the country’s best hope. He warned that Britain is in the midst of a national identity crisis, but hoped: “If Boris Johnson’s government can rediscover the magic words – and look at the challenge as a glass half full, rather than a glass half empty – he could strengthen the wonderful diversity and differences represented in a country which knows that the alternative to learning to live together is not a happy one.”

The President of the St Vincent de Paul society at the Jesuit-run church in Farm Street, Mayfair, has won the Mayfair and St James’s Community Award for her work helping homeless people in its Central London parish. Ms Kurahachi, who coordinates a soup run around Oxford Street and Hyde Park along with other volunteers, was presented with the award by TV host Alexander Armstrong at a ceremony at the Grosvenor House Hotel.

Stormont’s former Deputy First Minister and deputy leader of the SDLP, Seamus Mallon, was “a man of integrity and courage who was unafraid to speak up or call it as it was, even at great personal risk,” Archbishop Eamon Martin told mourners attending his funeral in Armagh on Monday. The leader of the Catholic Church in Ireland concelebrated the funeral Mass with Cardinal Sean Brady and local clergy at St James Church of Jerusalem, Mullaghbrack, Co Armagh. The congregation included the Deputy Lieutenant of Co Armagh representing the Queen, the Aide de Camp to President Higgins, the Taoiseach, the Tánaiste, the Secretary of State for Northern Ireland, Northern Ireland’s First Minister and Deputy First Minister, MPs, the US Consul General, Ministers, MLAs, TDs and public representatives from North and South. In his homily, Archbishop Martin noted that Seamus Mallon was unequivocally anti-violence. “Like Heaney he saw the ongoing bloodshed of the past as a ‘waste of life’ and a ‘waste of spirit’. He empathised from his heart with all those who were suffering and his consistent condemnation of violence from whatever source often left him open to insult and unfair criticism. But his principles, rooted in a strong faith and in an unstinting commitment to a culture of life, remained steadfast in face of such opposition,” Archbishop Martin told mourners.

Bishop Phonsie Cullinan has said that 90 per cent of Catholics in Ireland do not go to church regularly and urged the faithful to go out “and seek the lost”. In his pastoral letter to the Diocese of Waterford and Lismore he said: “we are evangelisers sent on mission”. He said that if the faithful take a close look at the culture around them, they would see the “great need for God’s grace”. “There is now a new culture which is trying to undo the truths of the entire Judeo-Christian system from the ground up by redefining the meaning of personhood, of marriage, of the family, and classifying people on the basis of their sexual preference, raising individual rights over those of the unborn, and denigrating the sacredness of human life to its natural end,” he lamented. Bishop Cullinan appealed to Catholics to change the culture from within. “If you and I want a culture which is healthy, where family life is helped and supported, where people have hope and can live in freedom to love God and their neighbour as themselves, then we must play our part.”

The first national conference of the Association of Teachers of Catholic Religious Education (ATCRE) will take place at St Mary’s University, Twickenham, on Saturday 8 February. This is likely to be the largest national event for Catholic RE teachers in England and Wales. Bishop Alan Williams of Brentwood is a keynote speaker, alongside Mary Myatt, educational consultant and former RE teacher, and Michael Merrick, a Catholic writer and primary headteacher. Seminars will look at such issues as "CAFOD Resources to help improve Catholic RE in the classroom" and "Global Insights on Catholic RE". ATCRE was formed in March 2018 with the support of the Catholic Education Service and is now an associate member of the National Board of Religious Inspectors and Advisers.

A University of Glasgow initiative aimed at solving a shortfall in Catholic teacher in Scottish schools is to be terminated this year after the Scottish Government announced that teacher numbers are at their highest for a decade. The accelerated programme, originally training teachers from Ireland who would then transfer to Scottish schools, is expected to come to an end this year, as Ireland reports a teacher shortage of its own. The course was run by the St Andrew’s Foundation, which is responsible for the training of Catholic teachers in Scotland and was extended to other universities across the country. Its director Dr Roisin Coll said that the course had had a “significant impact” on the number of religious education teachers available to Scottish schools.

Cafod, the Church’s overseas aid agency, welcomed the Government’s announcement that it will stop providing financial support to coal mining and coal-fired power plants overseas. The announcement came during the UK-Africa Investment Summit in London last week. Research from Cafod and the Overseas Development Institute has found that almost all of the UK Export Finance support for energy between 2020-2017 went to fossil fuels like oil and gas, as did 60 per cent of all the financial support the government provided for energy in developing countries. Sarah Wykes, CAFOD’s Climate Analyst, said: “Closing the loopholes on current coal investment through UK export finance is a positive step forward. But the UK must show it means business by committing to phase out all forms of public support for fossil fuels overseas.”

The Prime Minister’s Special Envoy for Freedom of Religion or Belief, Rehman Chishti MP, is to run the London Marathon for the Catholic charity Aid to the Church in Need, which supports persecuted Christians worldwide. Mr Chishti, a Muslim, first encountered the charity when working on the case of Asia Bibi, a Christian woman who faced the death sentence for blasphemy in Pakistan. He said: “The work ACN does is fantastic and I am delighted to highlight the charity in this way, helping support what they do to help Christians persecuted for their faith.” The London Marathon is due to take place on Sunday, 26 April.