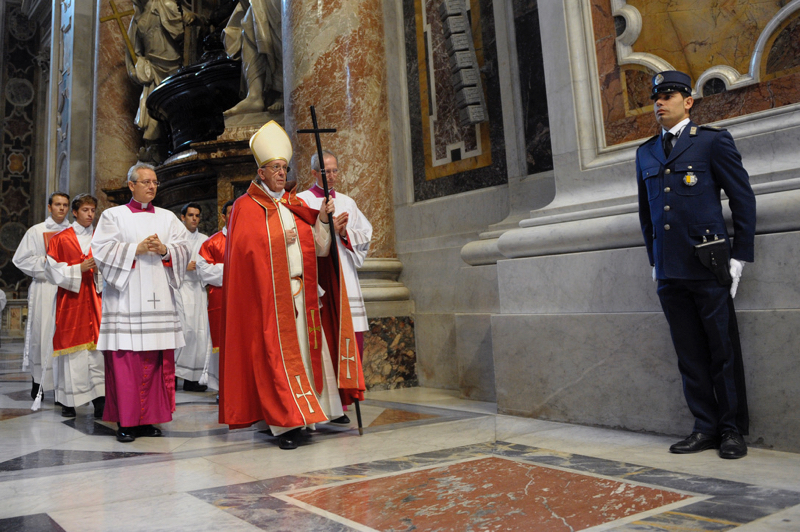 Re rises as cardinals' new dean

Pope Francis meets with bishops from California, Hawaii and Nevada during their 'ad limina' to the Vatican
CNS/Vatican Media

Catholics need to be on guard against allowing angry rhetoric to seep into discussions about the life of the church, Pope Francis told a group of US bishops.

Archbishop Salvatore Cordileone of San Francisco said the topics included youth and young adult ministry, Marian devotion, the clerical sexual abuse crisis, marriage and family life, migration, how to be a good bishop, political divisions within the United States and how some of that divisive rhetoric is seen within the church as well.

Pope Francis was particularly concerned about the extreme rhetoric in a polarised society during an election year, said Archbishop Cordileone.

One bishop told the Pope how society is "more and more divided", and people attack each other.

Pope Francis responded that something similar is sometimes happening in the church when different factions try to find something to attack people on personally.

"So the Holy Father spoke about this politicisation of pastoral life," said Archbishop Cordileone.

"We are constantly challenged to get the message across that we're not a political party and we don't follow a political platform with the issues," the archbishop said. "On some issues, one party is more favourable to what we understand is for the common good and, on other issues, another party might be more favourable."

Pope Francis told the bishops "that in a political system where there are only two parties, there's more of a tendency to be this way," the archbishop said. "He wasn't picking on us because as, he said, it's the same thing in Argentina, where they have a two-party system, and he sees it happening in his country."

Archbishop Jose Gomez of Los Angeles said the issue of migration was among the topics discussed with the Pope, who told them "how it's important for all of us in the church to be open and welcome immigrants".

The Pope, he said, "gave us some ideas on how to continue helping people to understand the reality of immigration", but also spoke about how increasing polarisation on the issue is found not only in the United States but in many parts of the world.

"He insisted to us that it is important to see the need for dialogue between people and to understand that we all are children of God," Archbishop Gomez told Catholic News Service.

Pope Francis also spoke to the bishops about the importance of youth ministry in the church and the need for bishops "to understand the reality of this new generation" that is "interested in action, in helping other people" as part of their participation in the life of the church, the archbishop said.

Archbishop Gomez told CNS that the Pope also insisted that young people have an attraction to the presence of Jesus in the Eucharist.

"We need to have places where they can come and be in adoration of the Blessed Sacrament and, at the same time, understand that what they want is to be active in taking care of the homeless, serving people in different situations and going out and making a difference," said the archbishop.

The pastoral care of LGBT Catholics was another topic Pope Francis spoke about, Archbishop Cordileone said. "He spoke about the pastoral care that we have to give" and the need to understand the suffering many of them have endured, including being shunned by their families.

"He made important distinctions between the (sexual) orientation and the question of marriage," for example saying it was important to ensure gay couples have access to public benefits, but insisting gay couples cannot marry, the archbishop said. "Marriage is unique; marriage, by its nature, is complementarity between man and woman. And he spoke about the danger of the gender ideology and how it denies difference."

Bishop Larry Silva of Honolulu told CNS he took advantage of the Pope's invitation to ask for clarifications about things he has said.

The bishop said he asked the Pope to talk more about what he means when he says Catholics must evangelise, but not proselytise.

"We're closing parishes, we're merging parishes, and so the problem is that we are not really good as Catholics about evangelisation," he said he told the Pope.   "I said, 'You've said many things about evangelisation and how it is the essence of the church's mission, but you have also talked ... against proselytising, and I am a little confused about the distinction," the bishop explained.

While the Pope answered in Italian through a translator, the bishop said: "I have to say I am still a little confused about his distinction. I don't know if he answered it directly."

However, he said what he gathered from the exchange is that the Pope does not see evangelisation as merely getting people to sign up. "Signing up isn't the point, it's knowing Jesus and serving Jesus and his people, and I think those are the key issues."

Bishop Silva told Catholic News Service the distinction is important because his experience has shown that "when you say, don't proselytise, it almost discourages evangelisation," because most Catholics think evangelisation is bringing people to church, opening the doors, being hospitable, having good liturgies, having good programs for them.

"I think the Holy Father emphasises, yes, those things are important, but they are not evangelisation," said the bishop. "We need to let Jesus out of the church so that he can touch people's lives who wouldn't be touched by the church."

The Catholic Church has programs for people of all ages, but only "if people come to us", he said. "If they don't come to us, then we have really nothing for them."
Catholics could be creative and think of non-church venues for catechetical events, he said.

"For example, you could reserve a room in the parish to hold Bible study in or you could have it at Starbucks or Denny's or wherever so that you make people curious about what you are doing and maybe attract some others who might not otherwise find themselves in the parish," he said.

Pope Francis, he said, "absolutely" wants the church to grow, "but he thinks that growing the church means getting out" and sharing the Gospel by example and by word.

Bishop Silva said some bishops also asked the Pope about increasing incidents of suicide and the need to give needed attention to people with mental health issues.

One bishop even suggested to the Holy Father that he might write a pastoral letter about that issue because it's an epidemic in many places. And the Pope said: "I will give that some thought and it could very well be a helpful thing for me to write about."

Contributing to this story were Cindy Wooden, Junno Arocho Esteves and Carol Glatz.

Catholic news Ad Limina visit The Catholic Church in the US