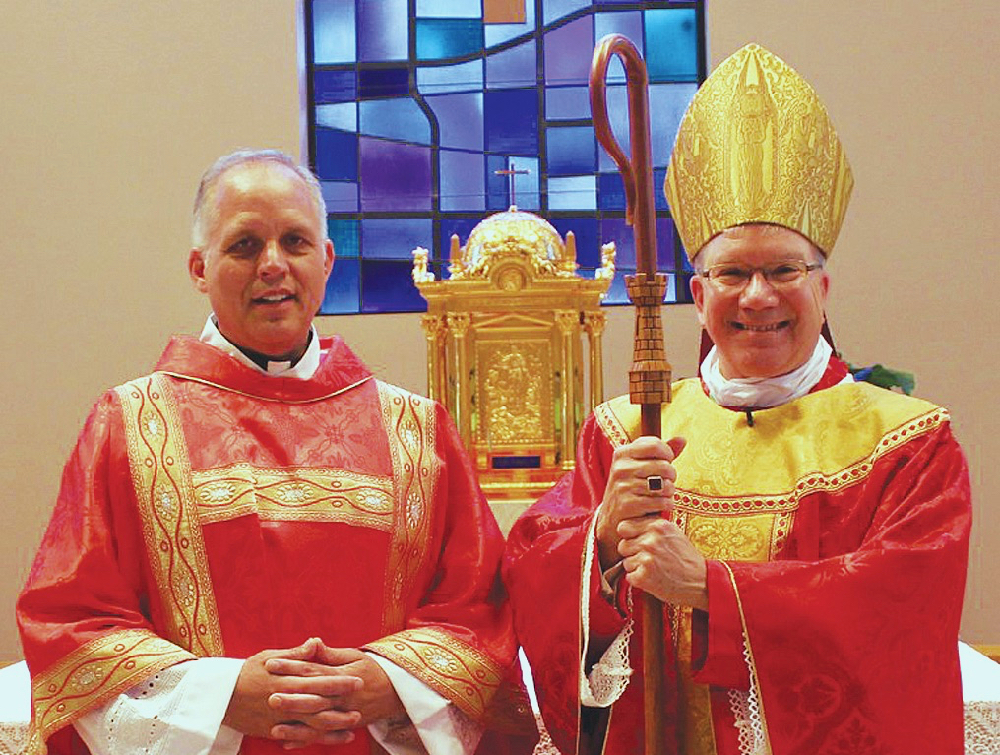 Justin Welby: 'As we approach Advent, we pray for Christ's peace on earth and freedom of religion for all.' 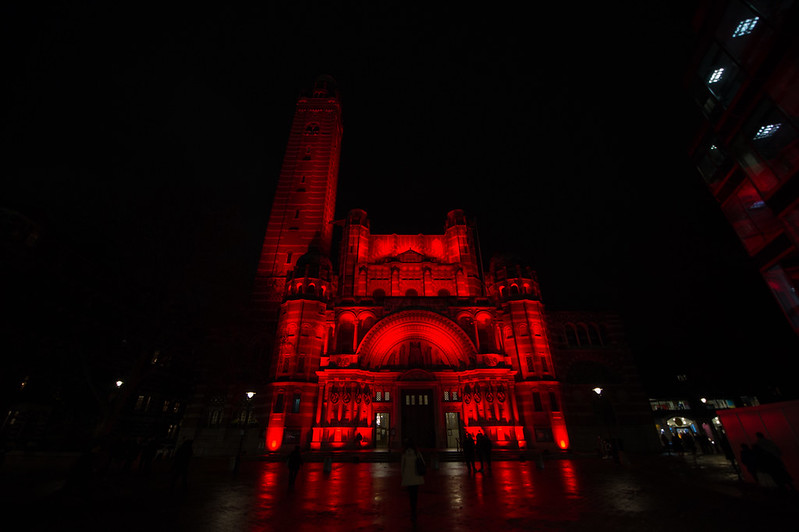 Buildings globally were bathed in blood-red light last Wednesday to draw attention to the plight of persecuted Christians. London’s Westminster Cathedral and Lambeth Palace were among the buildings lit red in the UK to mark Red Wednesday. The Archbishop of Canterbury, Justin Welby, said: “As we approach Advent, we pray for Christ's peace on earth and freedom of religion for all”. Red Wednesday is organised by Aid to the Church in Need to draw attention to the more than 300 million Christians facing persecution today. It aids Christian refugees of all denominations fleeing persecution, and people of other faiths. Australia was first on 27 November with the lighting up of seven Catholic Cathedrals including those in Sydney, Melbourne, Brisbane and Perth. Australian Catholics were asked to pray for persecuted Christians, wear red in their honour, and share a picture on social media with the hashtag #RedWednesday. St Patrick’s Cathedral in Melbourne celebrated a special Mass and hosted a week-long exhibition. Archbishop Peter Comensoli of Melbourne said: “We are proud to be Red Wednesday champions”. In the Philippines, Manila Cathedral was lit in red, and a Mass was celebrated by Bishop Pablo Virgilio David, Vice President of the Philippines Bishops’ Conference. More than 2,000 parishes in 68 dioceses in the Philippines took part including many schools. Marawi Bishop Edwin Dela Peña stressed the need for religious freedom. The bishop was himself a victim of religious persecution during the Marawi siege of 2017 in Muslim-majority Mindanao. “This is an opportunity not only for Christians but also for other religious minority groups that have been persecuted,” he reflected. Thousands of buildings in cities from Washington DC, to Toronto, Amsterdam, Lisbon and Prague joined Red Wednesday. In Budapest, it fell during a major international conference on anti-Christian persecution and this year, for the first time, Budapest’s Chain Bridge and the St Gellért Statue – St Gellert was the first martyr in Hungary – were lit in red.

Churches and faith groups around the country have been praying for the victims of the violent attack that took place on London Bridge on 29 November. Former University of Cambridge students Saskia Jones, 23, and Jack Merritt, 25, were fatally stabbed by 28-year-old convicted terrorist Usman Khan who was then shot dead by police. Leading politicians and police were among those gathered at a vigil on Monday to pay tribute to the victims. The service, at Guildhall Yard in the City of London, also honoured the emergency services and members of the public who responded to the incident. Cardinal Vincent Nichols tweeted thanks “to all who intervened and saved even worse loss of life and injury”. He prayed that, “we pull together to build peace between all our fellow citizens and end all hatred!” Archbishop John Wilson of Southwark urged “the exceptional London community to come together at this time for we must never allow such actions to divide us!”

The Bishop of Shrewsbury has called for Catholics to celebrate a silent Advent. In a pastoral letter, Bishop Mark Davies said parish churches often lacked the “silence of prayer” due to an “excess of talking”. He commended Cardinal Robert Sarah’s book, The Power of Silence Against the Dictatorship of Noise, and advised Catholics to find time every day for silent prayer during Advent. Bishop Davies said: “Without silence we cannot hear the God who speaks.”

Police in Ireland have condemned the theft of the head of a statue of a nineteenth century Irish archbishop from the grounds of the Cathedral of the Assumption in Thurles as an “act of wanton vandalism”. The Archbishop of Cashel and Emly, Kieran O’Reilly, told The Tablet that he did not think last June’s theft had an anti-Catholic motivation. Describing the crime as an affront to the town and the archdiocese, Archbishop O’Reilly said the appeal was being made now because “in the New Year we need to move on and see how to replace the head”. A former Archbishop of Cashel and Emly, Leahy undertook the building of the Cathedral of the Assumption and participated in the First Vatican Council.

Archbishop Diarmuid Martin of Dublin has warned of a “new language of racism” emerging towards refugees and asylum seekers, adding that he was “horrified” to see it within the Christian community. In a homily to mark the beginning of Advent at St Joseph’s parish in Bonnybrook, Dublin, the Archbishop said this racism is at times understated but is just as “nasty in its effects on men and women who need our help, our care and our respect”. The terms “refugee” and “asylum seeker” should only arouse heartfelt concern in the Christian heart, he said.

Politicians in Scotland have spoken out in support of faith schools after the writer and filmmaker Mark Millar alleged a “massive push coming to close down Catholic schools”. MSP Elaine Smith raised a motion in support of the positive contribution of Catholic schools in the country which are, she said, “under attack under the guise of ending sectarianism in Scotland”. Ms Smith said that the salient issue was anti-Catholicism itself, pointing out that Catholics are “subject to more attacks than all other religious groups combined.” Her comments were supported by deputy first minister and education secretary John Swinney. Meanwhile Scotland’s last remaining single-sex state school, Notre Dame in Glasgow, a Catholic school, has said it will admit boys for the first time in more than a century following a unanimous vote by city councillors.

The Bishop of Galloway last week joined a protest at Dangavel House Immigration Removal Centre and called for an end to the detention of asylum seekers. Bishop William Nolan, who is president of Justice and Peace Scotland, referred to the centre, in Strathaven, South Lanarkshire, as a “blot”. He said the centre differs from a prison in that the inmates have no idea when they might expect release.

The Bishops of England and Wales have welcomed the repatriation of a small group of British children who were orphaned in Syria after their parents travelled there to support Islamic State. The children, who are all from one family, returned to Britain on 22 November. The Bishops’ Conference Department for International Affairs commended the British Government’s initiative to bring British children home, but expressed concern about other children who remain trapped. Cecilia Taylor-Camara, the senior policy advisor at the Bishops’ Conference Office for Migration Policy, urged the UK government to do more to help UK citizens trapped in Syria.