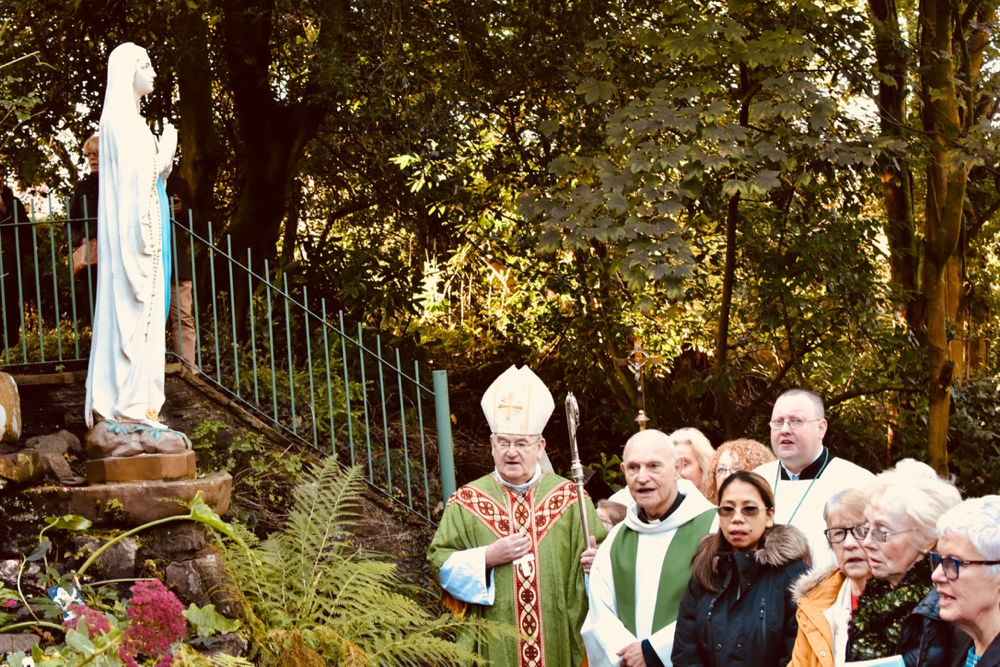 During the ceremony, Britain's Bishop of the Forces, Paul Mason, handed over a statue of Our Lady of Luján, Patroness of Argentina, 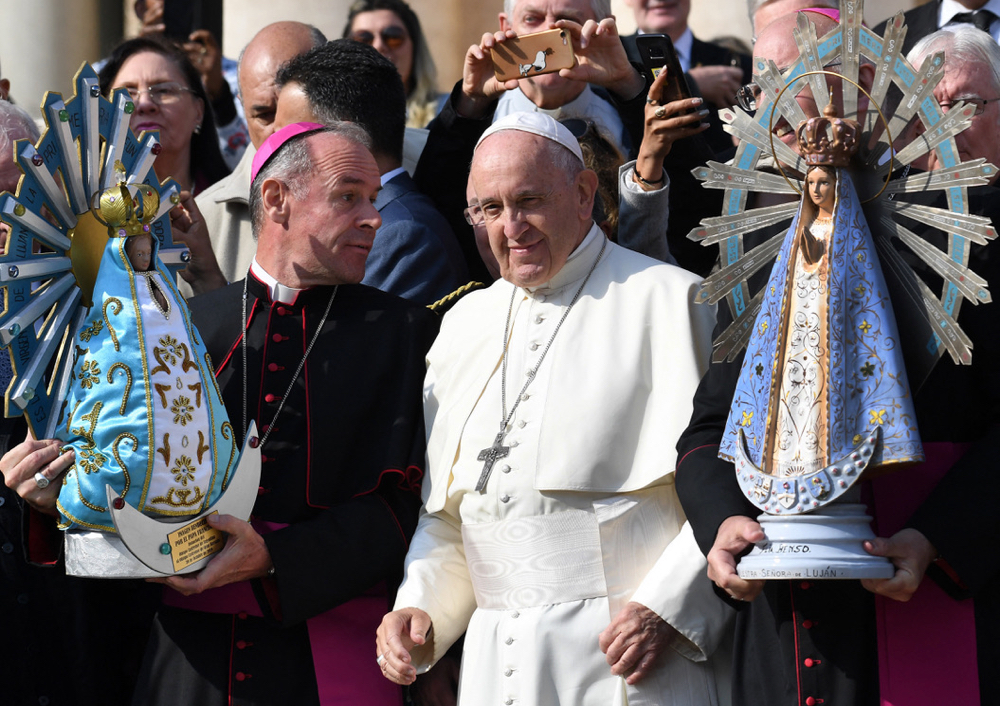 Pope Francis presides over the exchange of symbolically powerful statues of the Virgin Mary between Argentine and British bishops 37 years after the Falklands War between the two nations.
Vandeville Eric/ABACA/ABACA/PA Images

A moment of Falklands war reconciliation took place in the Vatican today.

A statue of Our Lady of Luján, Argentina’s patron, was taken to the Falklands by the Argentines soon after the invasion that triggered the 1982 conflict, and ended up in Britain. It is now being returned to Argentina.

Following the Wednesday General Audience on 30 October, Pope Francis blessed the statue, which had been on display in St Michael and St George’s Cathedral, Aldershot, along with another replica of the original, which will come to the UK.

The original statue dates back to 1630, and is in the Basilica of Luján in Argentina.

Wednesday’s blessing of the statues by the Argentine Pope took place in St Peter’s Square in the presence of the respective countries’ military Bishops: Paul Mason and Santiago Olivera.

Among those witnessing the ceremony was Fr Alf Hayes, a military chaplain during the Falklands conflict, who took the image back to the UK.

Fr Hayes, a priest of the Diocese of Lancaster, told The Tablet in Rome that the return of the statue was a moment of reconciliation and hoped it might help Argentine veterans.

“I went to Argentina about five years ago and there were veterans outside the Casa Rosada [Presidential Palace] who had been there since the war ended looking for justice because they didn’t get a penny in compensation,” he said.  “This might just spark something back in Argentina.”

Fr Hayes, a Spanish speaker who trained for the priesthood at the English College, in Valladolid, said he ministered to Argentine soldiers and prisoners of war during the conflict, including accompanying an Argentine priest in the burial of the deceased.

The statue of the Virgin of Luján first arrived in the Falklands on 9 April 1982, seven days after the invasion, and was installed by Argentine troops. During the first weeks of the conflict, it remained at the Malvinas Military Air Base at Stanley airport, and Argentine soldiers celebrated a Mass with the statue present on 8 May 1982.

Mgr Daniel Spraggan, the Apostolic Prefect of the Falkland Islands, gave Fr Hayes the statue to take with him to the UK. The former military chaplain stressed it was not “seized” by troops but had been left behind. On its return to the UK, it was mounted in the cathedral in Aldershot, under a plaque dedicating the statue to the “memory of those who died”.

Across Argentina there is a strong devotion to the Virgin of Luján, who was declared Patroness of Argentina, Paraguay and Uruguay by Pope Pius XI in 1930. Fr Hayes explained the whereabouts of the Falklands statue was unknown in Argentina until Retired British Army colonel Geoffrey Cardozo took Argentine veterans to see it in Aldershot. That set the ball rolling for its return with Bishop Olivera overseeing the negotiations.

During the exchange of statues today, the Pope, bishops, military representatives and others embraced each other in St Peter’s Square and shared mate, a South American tea which is Francis’ favourite. The Pope also blessed a black plaque in memory of the unknown soldier from the military cemetery of Port Darwin.

The Falklands conflict saw 255 British and 649 Argentines killed, and many more injured. Fr Hayes, who served for 20 years as a forces chaplain, spent much of the Falklands conflict in Fitzroy with the field surgical team, and ministered to the wounded on both sides. He also witnessed how British troops shared their rations with Argentine soldiers.

“When the fighting was over and I was able to fly out to our hospital ship, I went round the sick bay where they were just being laid out as they came in. There wasn’t a distinction between the British soldiers and the Argentinians,” he said. “The worst casualties came in, and they were operated on first.”

He added that the porcelain statue was almost destroyed when it was packed up to go to the UK as troops were throwing in heavy luggage onto the back of the Hercules plane taking them home. Fr Hayes said he pulled out the statue to make sure it was placed on top of the pile. “If I hadn’t been there it would have been smashed to bits,” he added.

According to parish history accounts, the “miracle of Luján” occurred in 1630 on an oxcart carrying a 15-inch clay statue of the Virgin Mary to Santiago del Estero for a Portuguese farmer there.

The oxcart came to a sudden stop on the right bank of the river and could not be moved until the tiny statue was taken off. This was considered proof the Virgin Mary had special designs for the place. The statue was left on the grounds until 1671 when it was moved to the site of what is now Luján city.

The sanctuary, built in Gothic style with twin spires 350 feet high, is visited by hundreds of thousands of Argentine pilgrims each year. Pope Pius IX and Pope Pius XII made pilgrimages there before their investitures as pope.

It was visited by St John Paul II when he went to Argentina in 1982 and celebrated a Mass in Luján on Friday 11 June with an estimated 1.2 million people. As soon as his visit to Argentina was announced on 26 May hotels in the city of 120,000 ran out of space. He was in the country for 36 hours from 11 to 12 June, and prayed for an end to the war with Britain, which started on 2 April and ended on 14 June 1982.

The Pope had visited the UK two weeks earlier, from 28 May to 2 June 1982, a visit that was threatened with cancellation because of the Falklands War and which was saved by the last-minute arrangement of the Argentina visit.

Pope St John Paul II made a second visit to Argentina in April 1987. No other Pope has ever visited the country.