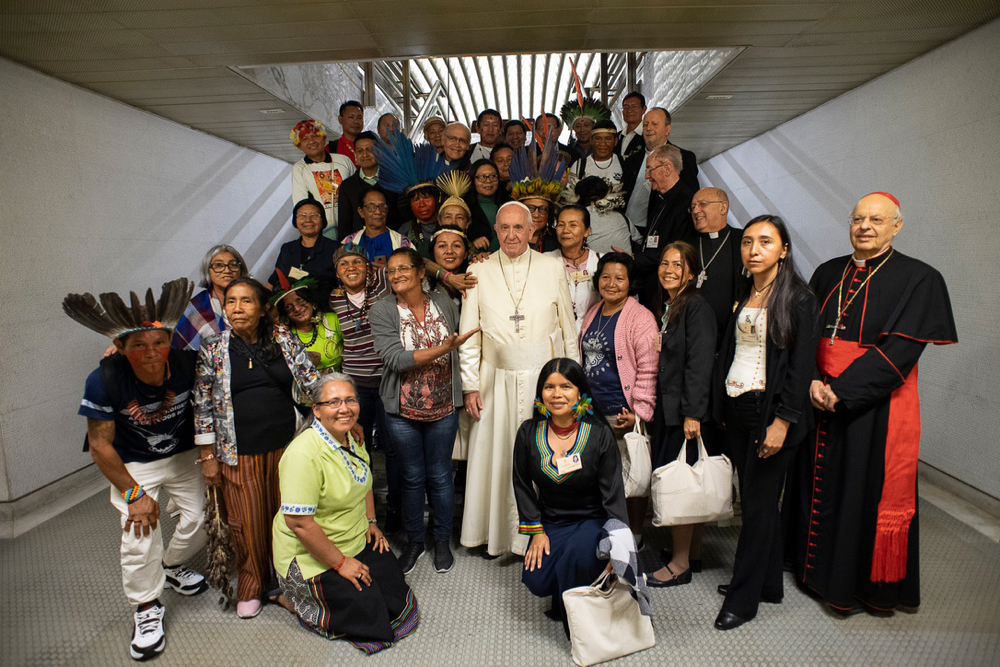 Heralds of the Gospel reject papal inquiry as 'illegal'

Church in the World News Briefing

Archbishop George Gänswein, who has a new book out, says the clerical abuse scandal has shattered the Catholic Church 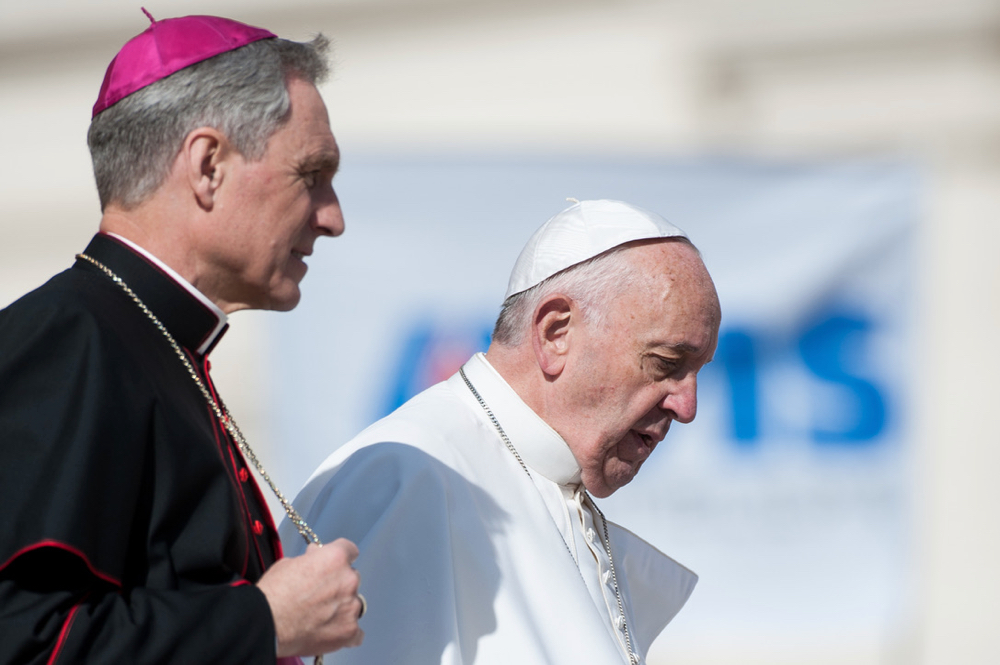 New York Governor Andrew Cuomo has announced plans to erect a statue to Mother Frances Xavier Cabrini, against resistance from New York Mayor Bill de Blasio. The Italian-American nun founded the Missionary Sisters of the Sacred Heart to assist Italian-American immigrants. “The Italian American community felt disrespected,” the governor said at a Columbus Day parade. De Blasio refused to include Mother Cabrini in a series of seven statues to be erected throughout New York honouring women as part of a “She Built NYC” project. The public were asked to nominate women to be honoured with the statues and Mother Cabrini received most votes, but de Blasio overruled the result. His nominees include a gay activist, a transgender activist, a Latina doctor and jazz singer Billie Holiday.

A vicious attack on protest leader Jimmy Sham has been condemned by the Catholic Justice and Peace Commission of Hong Kong, which is a member of Civic Human Rights Front, which Sham heads. Sham was attacked by at least five unidentified men with hammers and wrenches, leaving him bleeding on the road with head and arm injuries and needing hospital treatment. Jackie Hung, a project officer with the Commission, said: “Someone or some organisation is trying to threaten pro-democracy leaders but the attack will only provoke more opposition against the government.”

A new book by Archbishop Georg Gänswein, Prefect of the Papal household and emeritus Pope Benedict’s personal secretary, entitled The Nine-Eleven of Our Faith, was presented at this year’s Frankfurt Book Fair by Prince Asfa-Wossen Asserate, 70, a great-nephew of the last  Ethiopian Emperor, Haile Selassie. The title of the collection of 19 sermons, lectures and interviews between 2014 and 2019 refers to a comment made by Gänswein in 2018 in which he said that the clerical abuse scandal had shattered the Catholic Church as tremendously as the terrorist attacks of September 2001 had shattered the USA.

The Archbishop of Managua and President of the Bishops’ Conference of Nicaragua, Cardinal Leopoldo Brenes said the Church in Nicaragua is constantly under siege, especially since April 2018 when bishops and others proposed the exit of authoritarian President Daniel Ortega and early elections. Intimidation of the Church and priests has included macabre depictions of hanged mannequins dressed in black cassocks.

Church and civil society groups in the Philippines have entered into a partnership dubbed “Eco-Convergence” to promote the teachings of Pope Francis’ encyclical Laudato Si’. “Together we can achieve more,” said Bishop Jose Elmer Mangalinao of Bayombong. "There is this strength about the community that has one heart and one mind.”

Archbishop Joseph Arshad of Islamabad-Rawalpindi, President of the Bishops’ national Justice and Peace Commission, has urged Pakistan’s government to “immediately take effective measures to ensure the safety of minorities under Article 36 of the Constitution of Pakistan”. According to Bishop Samson Shukardin of Hyderabad, religious minorities are even giving their children Islamic names, “so they will not be singled out as Christians and become targets for discrimination in primary or secondary schools or at the college level”.

Protest have raged in the Chilean capital of Santiago since Friday last week and spread to other cities over the weekend. They began in response to fare increases on Santiago’s metro system, but have spread due to a general discontent with rising costs of living. Chile’s billionaire president, Sebastian Piñera, announced a state of emergency on Friday. By Monday morning, eight people had died in the protests and looting. The Permanent Committee of the Chilean Episcopal Conference released a statement saying: “The first obligation for people in leadership roles in the country is to understand the deep discontent of people and families who are impacted by unfair inequalities.”

A Catholic priest who disappeared from his family home was found dead in a shallow grave in southeastern Kenya five days after he was reported missing on 11 October. Police investigators and pathologists exhumed the body of Fr Michael Maingi Kyengo, 43, on 16 October. They said Fr Kyenga had been strangled and that his body had been disfigured. A local newspaper reported that as many as four people may have participated in the killing. Fr Kyengo had served as a priest in Thatha since his ordination in 2012. “Many bishops and priests have been targeted for exposing evil practices. They are being killed for standing for the truth,” said Fr Nicholas Mutua, justice and peace coordinator in the Diocese of Garissa.

Thirty-seven Catholic priests from different parishes in Mysuru, Karnataka, India, have appealed to Pope Francis to remove the Bishop of Mysore K. A. William on allegations of illicit sexual relations. A letter to Pope Francis reportedly seen by the Goa Chronicle alleges that the bishop has a child with a married woman.

US Attorney-General William Barr delivered a speech on religious freedom at University of Notre Dame law school on Friday 11 October, in which he warned that “militant secularists” were behind a “campaign to destroy the traditional moral order”. “Barr took the gloves off, saying that religion is not jumping to its death; it’s being pushed,” wrote Rod Dreher at the American Conservative magazine. “As we religious conservatives think about how to vote in the election next fall, we should ponder the fact that under Donald Trump, as awful as he is in so many ways, a man of William Barr’s convictions is heading up the Department of Justice,” Dreher continued. “Thank God Bill Barr is there.” C Colt Anderson, a Catholic theologian and professor of religion at Jesuit-run Fordham University, said the speech was a “dog whistle” to ultra-conservative Catholics campaigning to limit the rights of LGBTQ Americans, immigrants and non-Christians."

Catholic Justice and Peace groups have warned that work is still needed to secure “freedom, justice and reconciliation” in Eastern Europe, three decades after the largely peaceful collapse of communist rule. “With the fall of the iron curtain, we believed freedom was achieved - 30 years later, we see that freedom, justice and reconciliation involve more than removing iron curtains,” said the Conference of European Justice and Peace Commissions its mid-October four-day annual assembly, attended in Bratislava by leaders of Europe's 31 commissions.

Barcelona's Sagrada Familia cathedral – one of the city's main tourist attractions – was closed last weekend as the city was rocked by separatist protests. Protestors blocked the entrance to Antoni Gaudí‘s famous multi-spired landmark, after thousands had gathered in its vicinity. In a statement posted on its official Twitter account, the church said a group of protesters was standing at the entrance and interfering with access to the interior. Flights were cancelled to and from Barcelona, and roads were blocked throughout the city. The protests were over the sentencing of nine separatist Catalan leaders on charges stemming from the fallout of the 2017 independence referendum, which the central government of Spain said was illegal.