Give women religious the vote at synod, says theologian 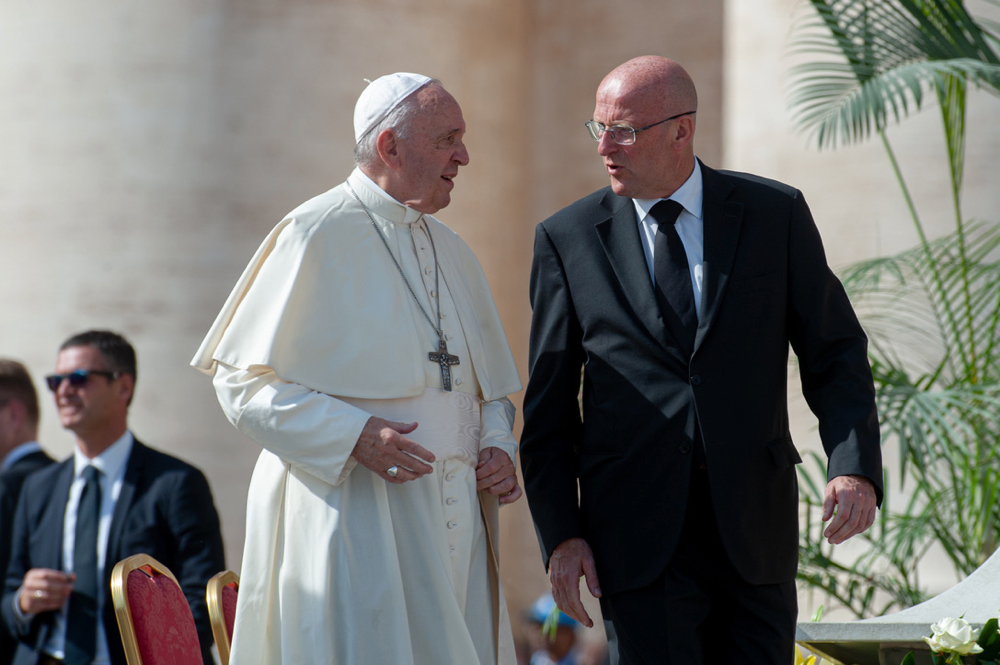 Pope Francis speaks to Domenico Giani at the end of the Mass for the canonization of 5 saints in St Peter's Square in the Vatican.
MASSIMILIANO MIGLIORATO/CPP/IPA MilestoneMedia/PA Images

The head of the Vatican police has resigned after details of an investigation into financial dealings in the Vatican were leaked to certain media.

The Vatican said that Domenico Giani, who has become a familiar figure on the international stage due to his long-time role as the bodyguard of Pope Francis, and who has served three Popes, bore "no responsibility" for what had happened, and the person responsible for the leaks remained unkown. Giani resigned "out of love for the Church" and faithfulness to the Pope, the statement said.

The Financial Times is among media outlets that have reported that the Vatican is investigating how $200m in Swiss bank accounts controlled by its central administrator ended up financing a luxury property development in Chelsea, London district that was highly profitable for a company that managed the investment for the Holy See.

The project was to build 49 luxury apartments in Sloane Avenue. The FT said it had become "the focus of an investigation by Vatican police into the financial activities of the Holy See’s Secretariat of State" and that earlier this month, the gendarmerie raided the secretariat and removed documents and computers and suspended five employees.

The Vatican said: "On 2 October some media outlets published a confidential order, signed by the Commander of the Vatican Gendarmerie, Domenico Giani, concerning the consequences of certain administrative limitations imposed upon Holy See staff members. This publication was prejudicial to the dignity of the people involved and to the image of the Gendarmerie.

"In order to assure the proper serenity to the ongoing investigation, coordinated by the Promoter of Justice and carried out by the Gendarmerie, since the perpetrator of the external circulation of the order – reserved to the staff of the Gendarmerie and of the Pontifical Swiss Guard – remains unknown, and although the Commander bears no personal responsibility in the unfolding of the events, Domenico Giani has tendered his resignation to the Holy Father out of love for the Church and faithfulness to Peter’s Successor.

"In receiving his resignation, the Holy Father conversed at length with Domenico Giani and expressed his appreciation to the Commander for his gesture, an expression of freedom and institutional sensitivity, which honours Commander Giani and the work he has carried out with humility and discretion in the service of the Petrine Ministry and the Holy See. Pope Francis also recalled Domenico Giani’s twenty years of unquestionable faithfulness and loyalty and underlined how, by offering an outstanding witness in many parts of the world, Commander Giani was able to establish and guarantee a lasting atmosphere of ease and security around the Holy Father.

"In his farewell to Domenico Giani, the Holy Father also thanked him for the extreme competence shown in the performance of his many sensitive tasks, also at international level, and for the undisputed professionalism he has brought to the Vatican Gendarmerie."

According to NCR, the gendarmerie raided  the Vatican's Secretariat of State and its financial watchdog on 1 October. An Italian paper that five people were suspended from work and banned from re-entering the city-state.

In an interview with Vatican News, Giani said: "I live this difficult moment with the inner serenity that those who know me know that they have marked my lifestyle even in the face of painful events. I have dedicated 38 years of my life to the institutions, first in Italy, and then for 20 years in the Vatican, to the Roman Pontiff. In these years I have spent all my energies to ensure the service that was entrusted to me. I tried to do it with self-denial and professionalism, but feeling, as the Gospel of two Sunday ago reminds us, remain serenely a "useless servant" who has done his small part to the end."

He said he was "deeply affected" by the pain caused to Pope Francis by recent events.

"Fifteen days have passed since the publication of the document that was sent for internal use exclusively for Gendarmeri and Swiss Guards. As indicated in the press release of October 1, an investigation is underway and the persons involved have been reached by an administrative provision. The release of this document, published by some media outlets, has certainly trampled on the dignity of these people. I too, as Commander, felt ashamed of what happened and of the suffering I caused to these people. For this reason, having always said and testified to being ready to sacrifice my life to defend that of the Pope, with this same spirit I made the decision to resign so as not to damage the image and activity of the Holy Father."

He also said Pope Francis had been aware for some time of a growing desire to spend more time with his wife and chilren.

And he spoke movingly of his years of service: "I had the honor of serving three Popes. First of all I remember with great emotion Saint John Paul II who called me to serve in the Vatican and whom I accompanied up to the last stretch of his life. I have enjoyed and continue to enjoy the esteem and affection of Benedict XVI whose side I have dealt with very delicate questions always receiving his appreciation and his trust. The pontificate of Pope Francis, for his style marked by proximity to people and spontaneity in gestures, was a further great challenge with significant and particular moments: I especially remember his pilgrimage to Lampedusa, the apostolic journey to Brazil for the WYD and the one in the Central African Republic. If I close my eyes, endless scenes from the nearly 70 visits run in front of me."