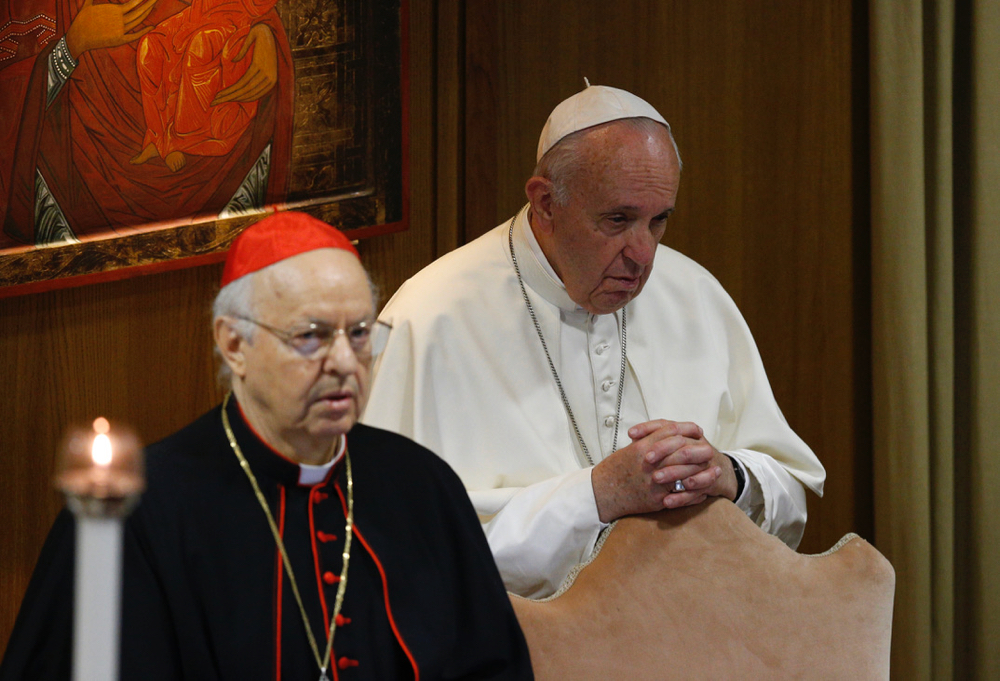 Columban missionaries are urging young people to challenge “throwaway culture” through its third Schools Journalism Competition. The title is: Tackling our Throwaway Culture. Young people aged 15-18 inclusive are invited to write an article or produce a short video report that informs, challenges and raises important issues on the topic. Financial prizes are offered.

It is an issue dear to me personally and to the Columbans. Twelve years ago I visited Manila in the Philippines for a Columban climate change conference. On a free afternoon one of the visiting priests and myself walked down to the Columban Parish of Malate by the Pacific Ocean, and strolled across the road to look over the sea wall and see the waves. Well there were waves alright – waves of plastic, going out about 100 yards into the ocean. Children were playing in them! We felt outraged and returned to the Columban house determined to call for a clean-up. “It is cleaned up once a week,” we were told, “but the problem is that much of Manila’s waste largely ends up in the ocean and constant clear ups do not solve the problem.” Manila, with a population of 12 million people, is the most densely populated city in the world, and has a massive problem disposing of its waste. And Manila is not unique.

Here in Britain, the average person produces half a pound of plastic waste every day. From bottles and bags to plastic pots, tubs and trays, our lives are full of it. Our decades-long addiction to plastic packaging has had a profound impact on the world we live in. Plastic debris contaminates our food supply, fills our oceans and kills plants and animals. And consider food waste. A third of all food produced globally is wasted and, if food waste were a country, it would be the world’s third largest emitter of greenhouse gases, behind the US and China. Other sectors can be scrutinised too, such as fashion, where young people are under considerable peer pressure to constantly buy the latest clothes.

Winners 2018 on the topic: Migrants are our neighbours. Credit: Sophie Stanes

Pope Francis, in the Laudato Si’ papal encyclical of 2015, suggested that modern society has a “throwaway culture”. He said: "The Earth, our home, is beginning to look more and more like an immense pile of filth." In bemoaning that "once beautiful landscapes are now covered with rubbish," the pope rebuked the consumerist mindset, where goods, food and even people are discarded after their perceived use and worth wears out. We live in a world where everything is seen as disposable, replaceable or temporary, and overflowing landfills and oceans full of waste are obvious signs.

Part of the problem is that we don't recognise how this issue starts with the individual. There are obviously lifestyle changes we can make to respond. In Laudato Si’ Pope Francis called for “a sound ethics, a culture and spirituality genuinely capable of setting limits and teaching clear-minded self-restraint.”

There are examples of parishes banning plastic cutlery, plates and cups in their halls as part of a commitment to live sustainably. Others have initiated parish gardens where food is grown and distributed without plastic packaging. We can do much as individuals and communities. Schools too are looking seriously into recycling and looking at ways for pupils to interact with the natural world and learn to wonder at God’s creation.

Columbans are involved with projects around the world which tackle the throwaway mentality and have made a commitment to investments which are environmentally and socially responsible. In the Philippines the Tetra Bag Project is a Preda recycling project that has turned throwaway aluminum foil drinks’ pouches into raw material for livelihood projects for survivors of sexual exploitation, youth rescued from prisons, students, and dozens of waste paper collectors. Wonders of Waste or WoW Bags is separate project which also addresses plastic pollution and offers a livelihood to poor communities. For ten years the project has worked in Malate parish and close to 100,000 plastic cartons are recycled annually to make into varied bags which are sold in Britain and Ireland.

In Pakistan, Columban Fr Liam O’Callaghan says: “The environmental crisis is the context in which we live here, the ‘signs of the times’, and scores of people are sick and dying every day because of it”. Ecological education has become a priority and across Hyderabad Diocese the Columbans hold workshops in parishes and schools. Practical suggestions for parish action include tree planting and training people to avoid the use of plastic bags, which cause pollution and block sewage systems. The Columbans often give out eco-friendly bags made from old clothing.

So the culture of ‘throwaway’ is pervasive in our world today. Students aged 15-18 are invited to write an article or make a video report that informs and raises important issues on the topic: Tackling our Throwaway Culture’ Two separate strands are underway – one for students in Ireland and one in Britain. Each has two categories, writing and video. The competition encourages students to use their journalistic writing and mobile skills to look at a topical issue which is relevant to society today and resonates with Catholic Social Teaching.

The closing date for entries is 14 February 2020. The Columbans have secured some high-profile judges from the world of journalism, including The Tablet’s online editor Ruth Gledhill for the British competition and Tablet home editor Liz Dodd for the Irish competition. Winning articles and videos will be announced in Columban media on 16 March 2020.

Columban Missionaries believe the issue of a “throwaway culture” raises serious moral and ethical concerns about the wasteful use of our planet’s finite resources. Young people can play their part in making a difference to promoting a sustainable future.

The Schools’ competition in 2019 focused on The Challenge of Climate Change and in 2018 on Migrants are our neighbours.

For more information about the 2020 Schools Journalism Competition and to enter see: www.columbancompetition.com 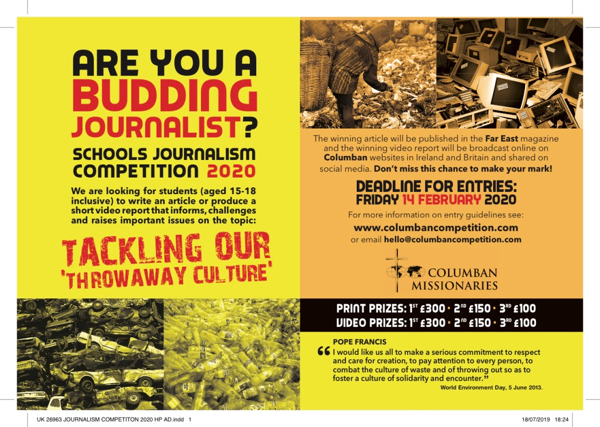