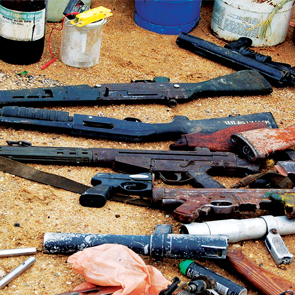 Bombing jihadists in Syria could make life worse for Christians in the region, the Armenian Catholic Archbishop of Aleppo has warned.

Archbishop Boutros Marayati told the missionary news agency Fides that Syrian Christians did not consider those conducting the raids to be “liberators”.

"People here do not have a clear view of what is going on,” he said. “The prevailing sentiment is that the raids will not solve the problems, and may even increase them. The uncertainty that everyone lives every day increases even more. A question fathers and mothers of families ask themselves is whether it is still possible to remain or if the only salvation is to escape," he said.

Meanwhile the Catholic charity Pax Christi International urged the United Nations to look for non-violent solutions to the expansion of the Islamic State (IS, also known as ISIS).

"We believe that especially the expansion of bombing is more likely to create significant recruiting bonanza for some of the extremist groups, ISIS included," Ms Dennis said.

Commenting on the situation in Iraq, Bishop Dowling said that the US invasion of the country in 2003 proved that war and violence was not a solution.

“We are now reaping the fruits of the fact that there wasn't an inclusive political, social response," Bishop Dowling said. He went on: “So we've got to find other ways, non-violent ways, inclusive ways."

Meanwhile Cardinal Pietro Parolin, the Pope's secretary of state, told the UN Security Council on Wednesday that terrorism "did not provide licence to meet violence with violence” but, in the words of St John Paul II after the 9/11 terrorist attacks, “must be exercised with respect for moral and legal limits in the choice of ends and means”.

In addition, Parolin said, the international community must address the root causes of terrorism, which included social and economic inequality.

"Young people travelling abroad to join the ranks of terrorist organisations often come from poor immigrant families, disillusioned by what they feel as a situation of exclusion and by the lack of integration and values in certain societies. Together with the legal tools and resources to prevent citizens from becoming foreign terrorist fighters, Governments should engage with civil society to address the problems of communities most at risk of radicalisation and recruitment and to achieve their satisfactory social integration," he said.

People of faith have a "grave responsibility" to condemn those who used faith to justify violence, he added.

In the UK, the Prime Minister, David Cameron, on Wednesday said he would recall Parliament, and MPs will vote on Friday on whether to join in US-led military action against IS. The Cabinet is meeting today to discuss plans for air strikes. Addressing the UN in New York today Mr Cameron, said that the UK was "ready to play its part".