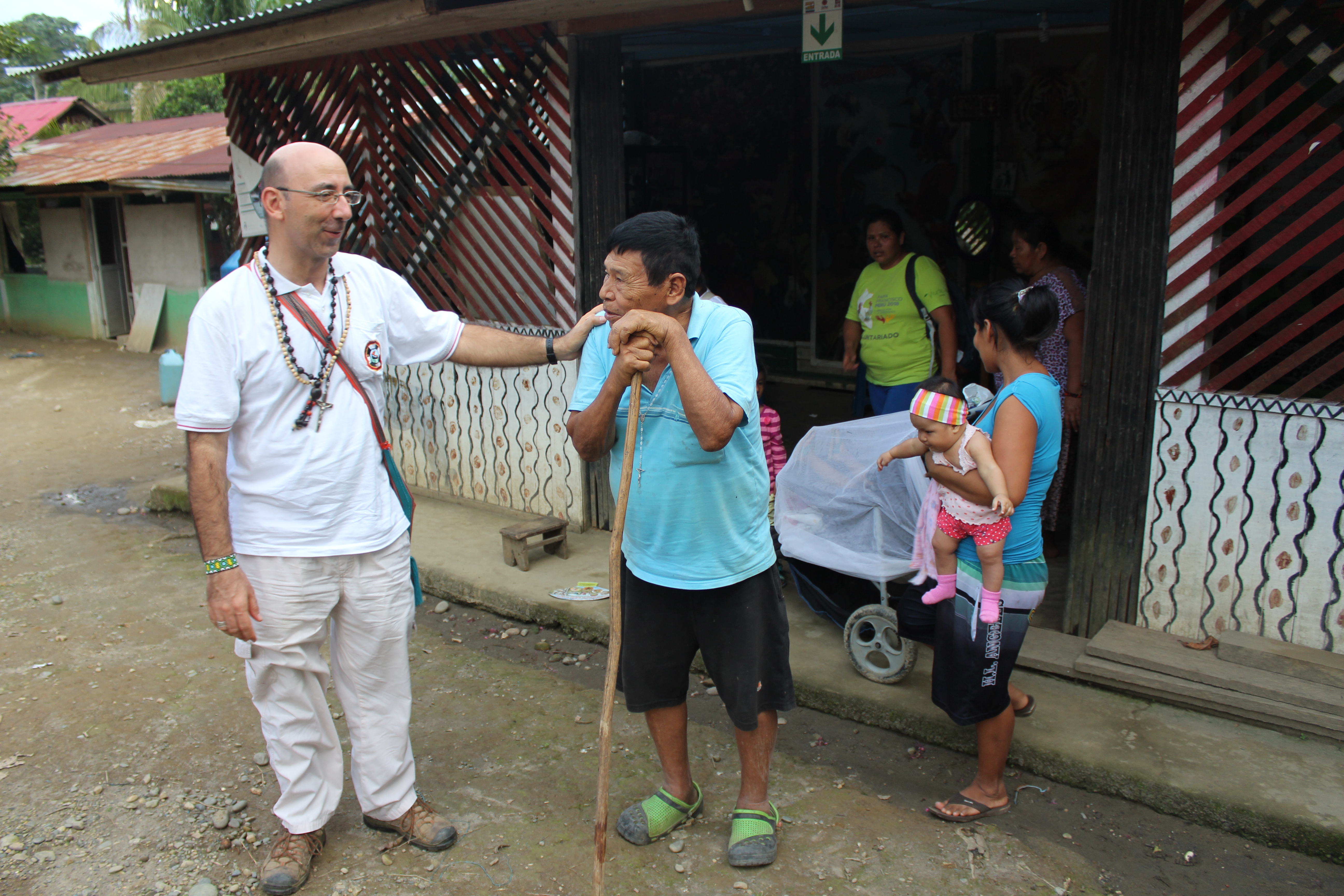 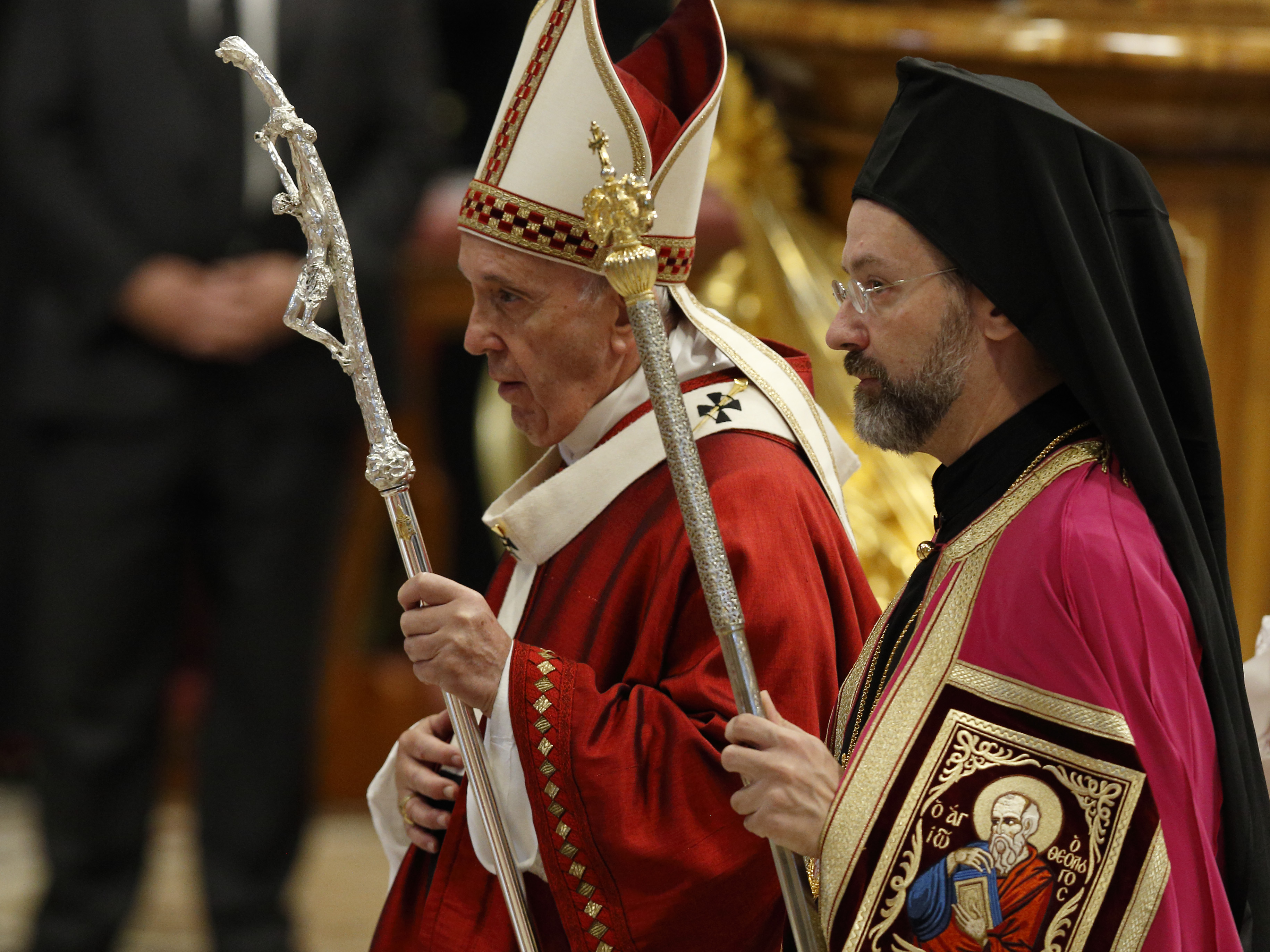 Pope Francis walks with Orthodox Archbishop Job of Telmessos as they leave Mass marking the feast of Sts. Peter and Paul in St. Peter's Basilica at the Vatican June 29, 2019

Pope Francis said giving fragments of St. Peter's bones to the head of the church founded by Peter's brother, St. Andrew, was meant to be a reminder and encouragement of the journey toward Christian unity.

In a letter to Ecumenical Patriarch Bartholomew of Constantinople, Pope Francis explained in detail the reasons he sent him a bronze reliquary containing nine bone fragments in late June. The unexpected gift had been presented to Archbishop Job of Telmessos, the patriarch's representative, at the Vatican June 29, the feast of Sts. Peter and Paul.

Addressing the patriarch as "Your holiness, dear brother," the pope wrote that he wanted to give the bones, believed to be St. Peter's, to the patriarch and "the beloved church of Constantinople over which you preside with such devotion."

"This gesture is intended to be a confirmation of the journey that our churches have made in drawing closer to one another: a journey at times demanding and difficult, yet one accompanied by evident signs of God’s grace," he wrote. The letter, dated Aug. 30, was released by the Vatican Sept. 13.

During a moment of prayer and reflection about "our mutual determination to advance together toward full communion," the pope said he thought about their predecessors' historic meeting in Jerusalem more than 50 years ago and the gift Patriarch Athenagoras gave to St. Paul VI -- an icon depicting the brothers Peter and Andrew "embracing, united in faith and in love of their common Lord."

The fragments came from a funerary niche discovered in 1952 under the high altar in St. Peter's Basilica. While bones remain in the niche, St. Paul VI had nine fragments removed and placed in a special reliquary that was kept in his private chapel in the papal apartments.

The only time the bronze reliquary had been displayed publicly was in November 2013, when Pope Francis presented it for public veneration as he celebrated the closing Mass for the Year of Faith, opened by Pope Benedict XVI.

After Mass June 29 this year, Pope Francis brought Archbishop Job to the chapel of the old papal apartment and offered the reliquary to his guest as a gift for his "brother" Patriarch Bartholomew.

It was "another gigantic step toward concrete unity," Archbishop Job said.

The patriarch said he was "deeply moved" and described this "brave and bold initiative of Pope Francis" as a "grand, fraternal and historic gesture."

Pope Francis wrote in his letter, "The joining of the relics of the two brother apostles can also serve as a constant reminder and encouragement that, on this continuing journey, our divergences will no longer stand in the way of our common witness and our evangelizing mission in the service of a human family that today is tempted to build a purely secular future, a future without God."