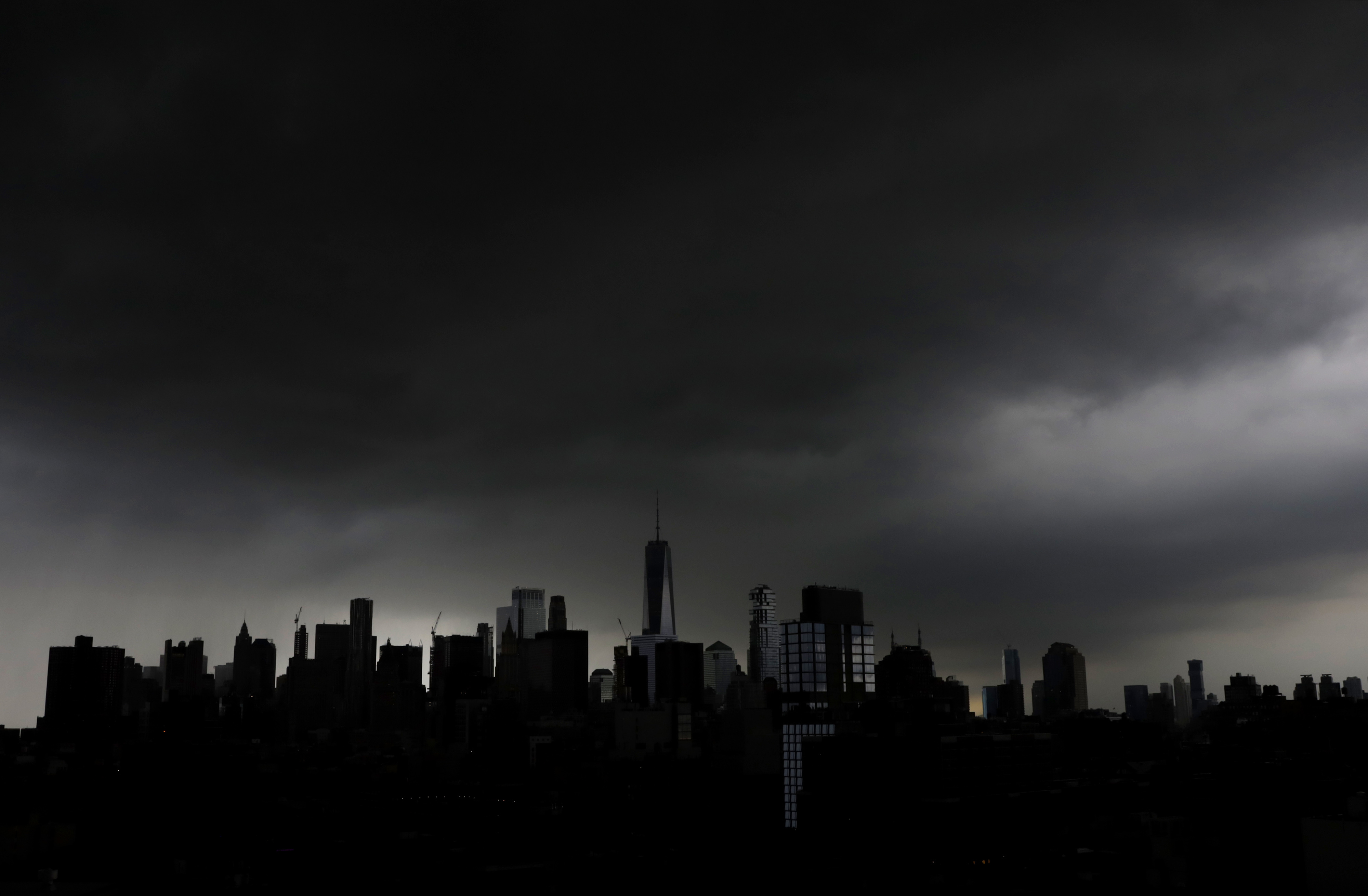 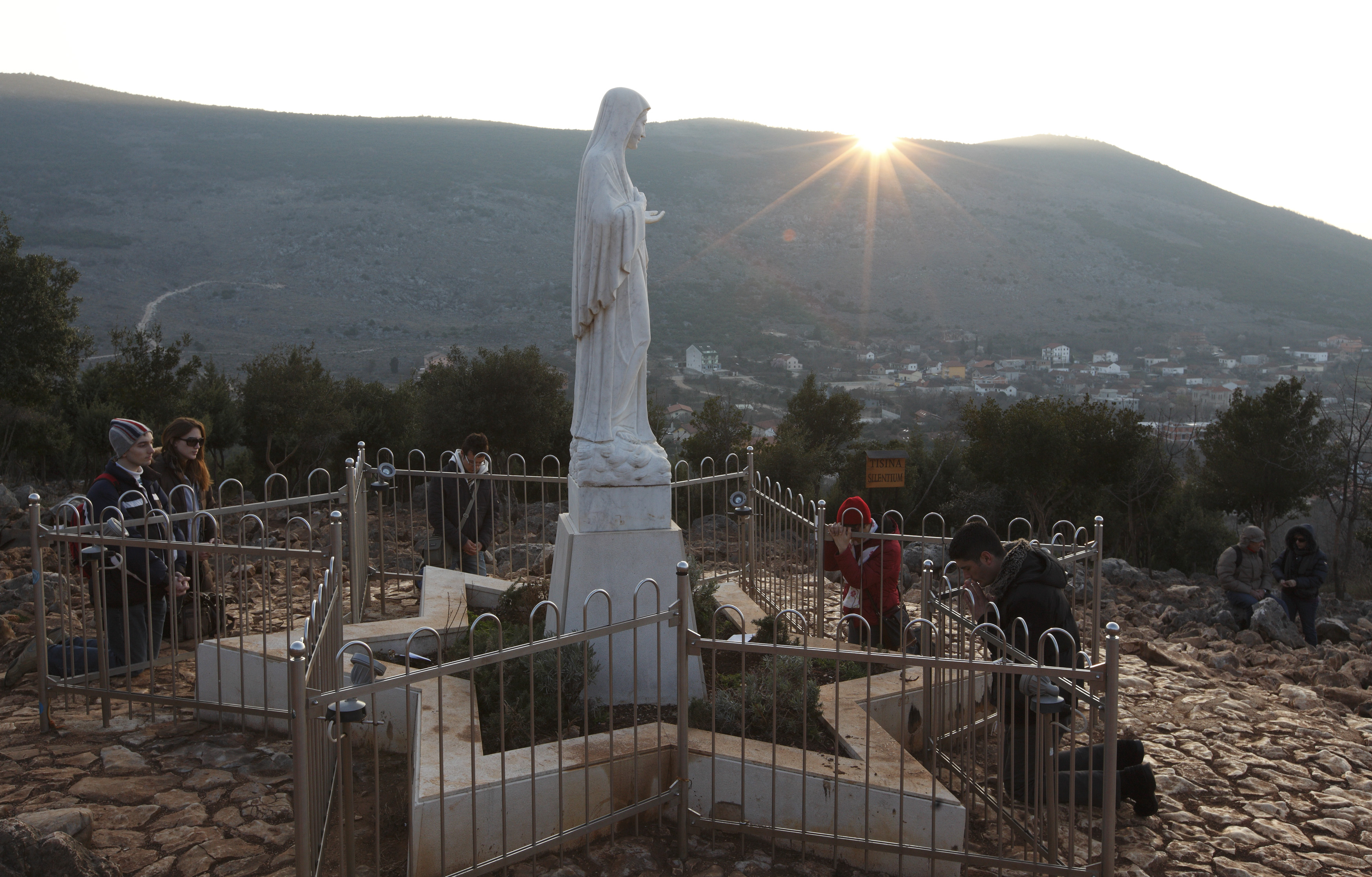 Pilgrims pray around a statue of Mary on Apparition Hill in Medjugorje, Bosnia-Herzegovina, in this 2011 file photo
CNS photo/Paul Haring

Medjugorje, Bosnia-Herzegovina, is a place of prayer, conversion and pilgrimage for millions of people, but the church must be prudent and not rush to any judgment on the alleged Marian apparitions there, said Archbishop Rino Fisichella, president of the Pontifical Council for Promoting New Evangelisation.

Speaking to Catholic News Service at Knock Shrine in County Mayo on 15 August, the feast of the Assumption, Archbishop Fisichella spoke of attending the first officially approved church festival at Medjugorje in early August.

"I confess the experience was very beautiful, seeing about 70,000 young people praying and living together and listening to catechesis," he told CNS, describing it as a mini-World Youth Day.

The presence of so many young people there was, he suggested, "one of the fruits" of the pastoral efforts of Medjugorje.

Visionaries claim to have seen than 40,000 Marian apparitions since June 1981, when six teenagers first claimed they first saw an apparition of Our Lady while herding sheep.

As always, when confronted with an apparition, the church "is always prudent," Archbishop Fisichella said.

In May 2018, Pope Francis named Polish Archbishop Henryk Hoser as apostolic visitor to the shrine, after a papal commission recommended that Medjugorje, which attracts up to 3 million visitors annually, be designated a pontifical shrine with Vatican oversight. A ban on pilgrimages organised by dioceses and parishes was then lifted by papal decree.

Some of the six visionaries say Mary still appears to them daily and gives them messages. However, in 2017, when asked about this, Pope Francis appeared to doubt the ongoing nature of these apparitions.

Differentiating between the Vatican's pastoral care of Medjugorje and the doctrinal study of the apparitions, Archbishop Fisichella said that, following the papal commission's conclusions, "we are now in another step (phase) in order to understand what happened in Medjugorje."

"I think that for the moment it is necessary to evaluate the richness of the work in Medjugorje. We need to understand all of this together: why there is such a huge number of pilgrims, of prayers and to understand also how the possible apparitions in Medjugorje (relate) to the life of the church. For that we should wait the judgment the Holy Father will give. To rush this delicate matter is a mistake."

Archbishop Fisichella was in Knock as the keynote speaker for the feast of the Assumption as part of the annual novena at the Irish church's national shrine, which draws up to 100,000 pilgrims over the nine days of the novena.

This year marks the 140th anniversary of the apparition in Irish village. On 21 August, 1879, 15 people, ages 6-75, witnessed the silent vision of Mary, St. Joseph and St. John the Evangelist as well as the Lamb of God standing on the altar in driving rain.

Speaking to CNS about the message of Knock, Archbishop Fisichella said he was "touched by the vision of St. John," who was seen in the apparition giving the sign of silence. "Probably not many people know that this was the request for silence made by the master among the disciples" in medieval times.

He suggested that the message of Knock and its "request of silence" was "extremely important" for today's contemporary "era of chat."

At a seminar the same day on the theme, "Mary in the life of the church," the archbishop also expressed concern over the number of millennials who feel isolated and have no friends.

Discussing the concept of koinonia -- communion and community -- Archbishop Fisichella told the Knock seminar that "in a culture like ours, where there is such a strong individualism, we need to discover the necessity of community and relationship."

He said he had been shocked to learn of a recent finding in the United States that showed as many as 30 percent of millennials identified solitude and a lack of friends of one of their main problems.

"It is unbelievable but true. Normally we think of solitude as a problem for people in their 70s or 80s due to their condition of life. Millennials are people born in 2000, and today they are 19 years old. This solitude stems from a culture in which people close in on themselves. Without relationships you cannot trust; if you don't trust you can't communicate; if you don't communicate there is no possibility of friendship; and if there is no friendship there is no possibility to learn to express yourself."