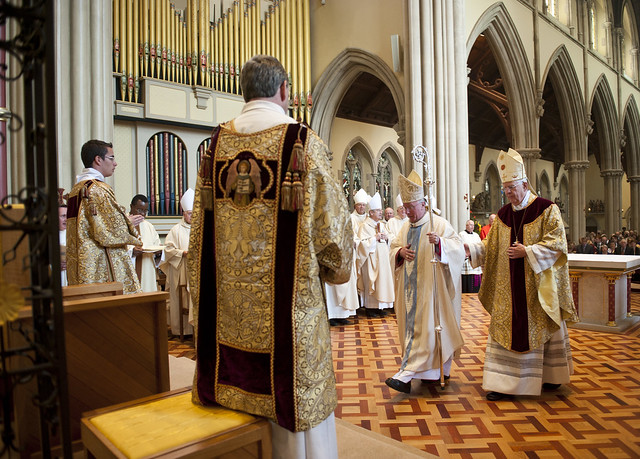 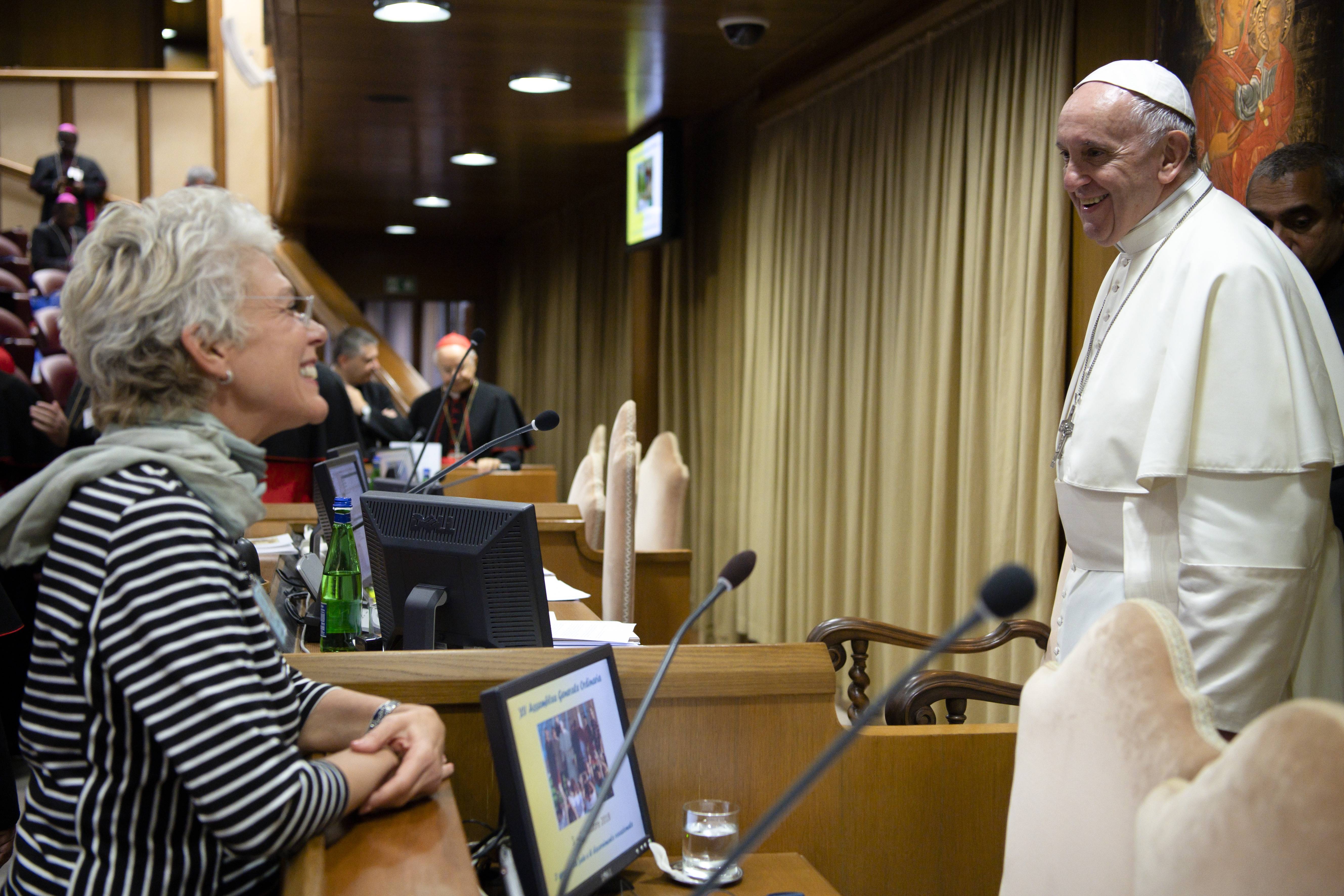 Cristiane Murray, a Brazilian journalist appointed as deputy director of the Holy See Press Office, is pictured talking with the pope in an undated photo
CNS/Vatican Media

India’s Supreme Court has ordered the release on bail of the second of seven Christians convicted of the murder of a Hindu spiritual leader 11 years ago. Bijaya Kumar Sanaseth was expected to be freed last weekend from the Phulbani district jail in eastern Odisha. The shooting dead of Hindu swami Laxmanananda Saraswati and four of his associates on 23 August, 2008, in the Kandhamal district of the state, triggered anti-Christian riots. A hundred Christians were killed, homes were burned down and women were raped. Police arrested seven Christian villagers, six of whom were illiterate. They were sentenced to life imprisonment after being convicted of the killings.

A debate over freedom of expression has broken out in Lebanon after Church leaders demanded that a concert by alternative rock band Mashrou’ Leila, scheduled to take place on Friday in the coastal city of Byblos, be cancelled, saying the group’s songs are an insult to Christianity. The band, whose lead singer and song writer, Hamed Sinno, is openly gay, has been a champion of LGBT rights in the Arab world. The band’s lyrics tackle oppression, sectarianism and homophobia.

Italian bishops are to provide almost £1 million in humanitarian aid to South Sudan. The funds, which will help to resettle refugees and internally displaced people and promote peace in communities ravaged by violence, will be paid under a programme initiated by the Italian bishops’ conference and coordinated through Caritas South Sudan and Caritas Internationalis.

Monsoon rains have continued to affect much of Bangladesh, in particular the central-northern and south-eastern regions and Cox’s Bazar, which is home to more than a million Rohingya refugees. The World Health Organisation reports that severe floods have caused at least 90 deaths and displaced more than 1.5 million people. Caritas Bangladesh has helped to bring aid to the region.

Leaders of an archdiocese in Vietnam have urged local Catholics to avoid Marian cults and irregular ritual practices claimed to cast out evil spirits. Bishop Joseph Do Manh Hung, apostolic administrator of Ho Chi Minh City Archdiocese in the south of the country, and Auxiliary Bishop Louis Nguyen Anh Tuan said that some local Catholics had adopted inappropriate practices.

A bishop in central Philippines has ordered the simultaneous ringing of church bells at 8 p.m. to protest against a series of killings in his diocese. Bishop Gerardo Alminaza of San Carlos made the order after several people were killed in the province of Negros Oriental on 24 July.

About 450 priests in India were reported by Associated Press to have begun a hunger strike and prayer vigil last week in protest against the reinstatement of Cardinal George Alencherry, head of the eastern rite Syro-Malabar Church in the southern state of Kerala. Cardinal Alencherry faces allegations of financial mismanagement. He has also been accused of failing to respond to reports of misconduct after a nun claimed that she had been raped. A spokesman for the Syro-Malabar Church has since disputed the accuracy of the AP report.

The authorities in Cuba have announced that 2,604 prisoners will be released and pardoned. The National Penitentiary Pastoral of the bishops’ conference released a statement welcoming the decision last week. Most of the prisoners selected for pardon are women, youngsters or elderly. Meanwhile, the Cuban government and Communist Party officials attended funeral services last Sunday for Cardinal Jaime Ortega who died on 26 July aged 82 after a long battle with cancer. (Obituary, page 30.)

The Archdiocese of Luxembourg has asked Pope Francis to endorse the appointment of its vicar general, Mgr Leo Wagner, as its first auxiliary bishop. He will help Archbishop Jean-Claude Hollerich with his increased workload following his election as head of the Commission of the Bishops’ Conferences of the European Community (COMECE) last year.

Pope Francis called on the international community “to act with speed and decisiveness” to address the issue of migration. His made his appeal during the Sunday Angelus, when he prayed for the 115 migrants thought to have drowned after a boat sank off the coast of Libya last week.

Pope Emeritus Benedict XVI (above) visited Castel Gandolfo last week, his first visit to the papal summer residence in four years. Benedict stopped “in the gardens for a walk and recited the Rosary”; visited the shrine of Our Lady of Tufo in Rocca di Papa and had dinner with Bishop Raffaello Martinelli in Frascati before returning home to his residence in the Vatican gardens, the Vatican confirmed.

Pope Francis has appointed a Brazilian journalist, Cristiane Murray, as deputy director of the Holy See Press Office. She will join new director, Matteo Bruni, whose mandate began on 22 July.

Vatican officials say experts have found no recent bones in their examination of an ossuary as part of the search for a missing teenager, Emanuela Orlandi, who disappeared 36 years ago. Forensic experts removed thousands of bone fragments from the basement of the Pontifical Teutonic College on 20 July but confirmed on Sunday that they had been found to date from before the end of the nineteenth century.”

The newly appointed conservative mayor of Cordoba in southern Spain has closed down an official commission investigating ownership rights to the city’s sixth-century Visigothic cathedral, a former mosque, saying it should be reserved for Catholic worship. “There are no administrative tasks arising from this commission and I’ve no intention of reactivating it,” José Maria Bellido, a member of Spain’s conservative Popular Party, told the Agencia Catolica de Informaciones. He said he would explain his decision to discontinue enquiries into the cathedral’s status to Bishop Demetrio Fernandez as part of efforts to “restore loyal and co-operative relations”.

Governor of Puerto Rico Ricardo Rosello last week announced on Facebook that he would be resigning from 2 August, (writes Martha Pskowski). Rosello stepped down after two weeks of widespread protests in the US territory. The protests started after private messages, including homophobic and misogynistic statements that Rosello had sent, were made public two weeks earlier. The Puerto Rican bishops had previously stated their concerns that Rosello should not stay in the post, and released a statement after his announcement, calling for “profound reflection” in Puerto Rican society. The letter, signed by Bishop Ruben Gonzalez Medina of Ponce, president of the bishops’ conference, said that the people of Puerto Rico must “maintain the serenity and democratic balance that this period of government transition deserves”. “Let us make this a great opportunity to unite as a people and work together, without flags and parties, in the search for the common good to overcome the fiscal crisis, corruption, violence and other evils,” the letter said.

Colombians marched in some 50 cities across the country last Friday to protest over the rise in killings of activists and human rights defenders, (writes Martha Pskowski). The number of activists killed since the 2016 peace accords with FARC guerrillas is disputed. The government acknowledges 289 but the ombudsman puts the figure at more than 400.  The Colombian bishops’ conference released a statement in support of the marches. “It causes us immense sadness that every day we receive news of killings, clashes and attempted murders; we see ever more atrocious and degrading forms of killing,” the statement read. Marchers called for justice for the murdered activists, many of whom were indigenous or Afro-Colombian people. The protests called on President Ivan Duque and the international community to curb the killings. Many of those killed were working with farmers seeking to change from growing coca or other illegal substances. Duque takes a harder approach to drug eradication than his predecessor, Juan Manuel Santos.

Catholic leaders reacted strongly to US Attorney General William Barr’s announcement that federal executions would resume after a 16-year hiatus, (writes Michael?Sean Winters). There are 62 inmates on death row in federal prisons today. Bishop Frank Dewane, chair of the bishops’ Committee on Domestic Justice and Human Development, recalled that Pope Francis called for an end to the death penalty when he addressed the US Congress in 2015 and that the US bishops had long opposed the practice. “In light of these long held and strongly maintained positions, I am deeply concerned by the announcement by the United States Justice Department that it will once again turn, after many years, to the death penalty as a form of punishment, and urge instead that these federal officials be moved by God’s love, which is stronger than death, and abandon the announced plans,” a statement from Dewane read. In a speech to the Napa Institute in California, Cardinal Raymond Burke gave an address in which he objected to the Pope altering the Catechism to say the death penalty is always wrong.

Bishop Robert McElroy of San Diego told a conference at Creighton University that confronting climate change should become “a central priority” for the Church in the United States, (writes Michael Sean Winters). In his keynote address, McElroy spoke of the estrangement between humankind and the planet and pointed to Pope Francis’ encyclical on the environment as offering the necessary correctives.  “Laudato si’ both unmasks this estrangement and points to the pathway for us to move from alienation toward healing and renewal of the earth. The encyclical is a call to arms for those who would rescue our bruised planet from the forces that deplete and destroy it,” Bishop McElroy said. Meanwhile, Archbishop Joseph Kurtz of Louisville, Kentucky, 72, stepped down as chairman of the bishops’ conference’s Committee for Religious Liberty for health reasons.