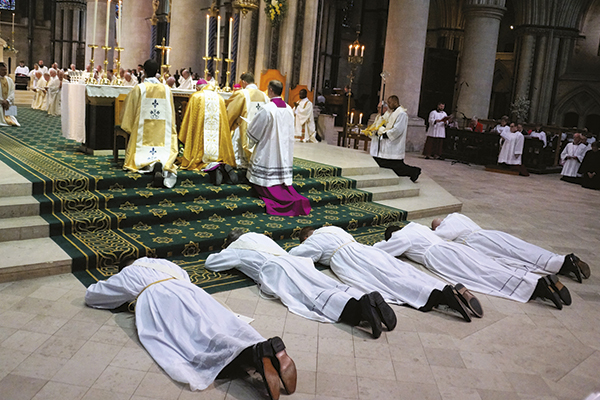 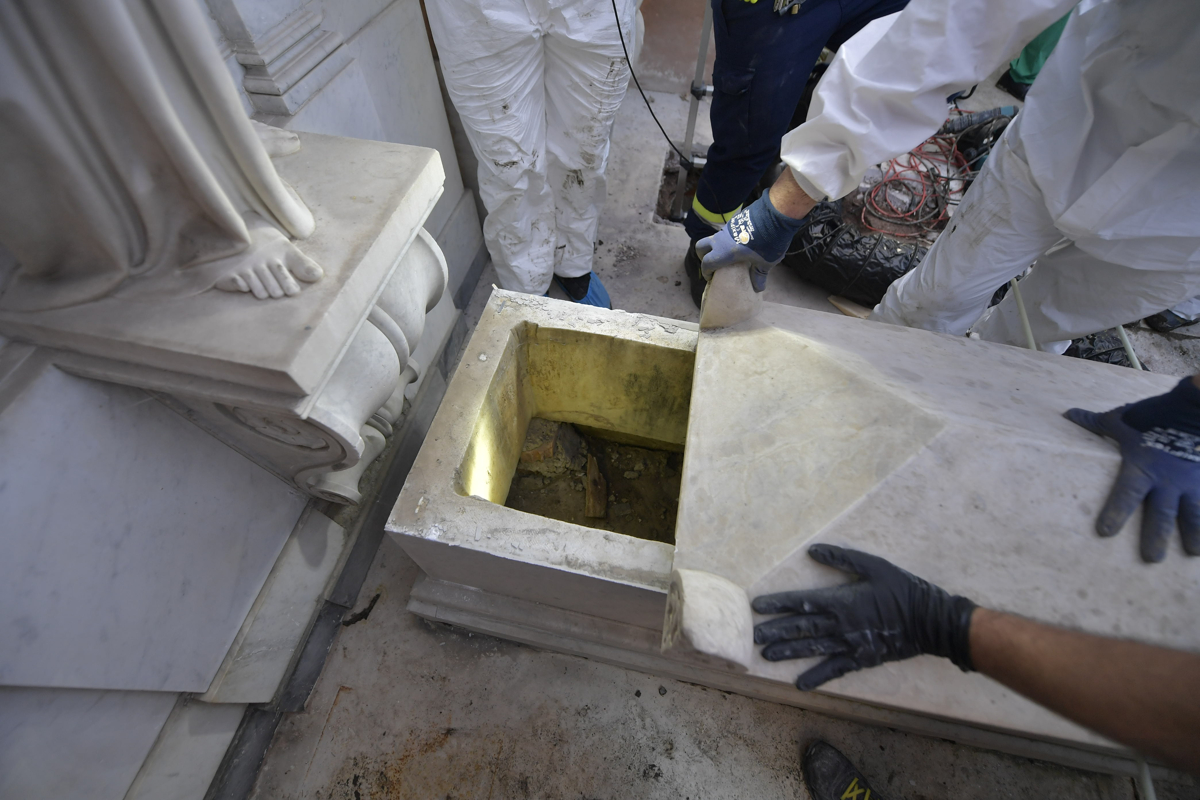 Workers open the tomb of Duchess Charlotte Frederica of Mecklenburg-Schwerin, who died in 1840, during a forensic investigation in the Teutonic Cemetery at the Vatican July 11, 2019.
CNS photo/Vatican Media

Opening the Vatican tombs of a princess and a duchess July 11 in a search for the remains of Emanuela Orlandi, missing for more than 30 years, the Vatican found no human remains at all.

"The search had a negative result," said Alessandro Gisotti, interim director of the Vatican press office. "No human remains or funeral urns were found."

Now, Gisotti said, Vatican officials will go into the archives to study documents dealing with "structural interventions carried out in the area" of the Teutonic Cemetery at the end of the 1800s and again in the late 1960s and early 1970s.

The cemetery, existing since the Middle Ages, is now reserved mainly for German-speaking priests and members of religious orders.

The side-by-side tombs had been marked as the final resting places of Princess Sophie von Hohenlohe, who died in 1836, and Duchess Charlotte Frederica of Mecklenburg-Schwerin, the mother of King Frederick VII of Denmark, who died in 1840.

A Vatican City State court had ordered the opening of the tombs at the request of the family of Emanuela Orlandi who disappeared in Rome June 22, 1983, at the age of 15. She was a Vatican City resident and daughter of a Vatican employee.

In March, the Orlandi family's lawyer revealed the family had been sent a letter with a photo of an angel above a tomb in the Vatican cemetery. The letter said: "Look where the angel is pointing," according to Laura Sgro, the lawyer.

Vatican workers, supervised by Vatican police and a forensic anthropologist, opened the tombs July 11 after a short prayer was recited by the graves. Sgro was present, along with Pietro Orlandi, the brother of the missing woman.

"We want to reemphasise that the Holy See always has shown attention and closeness to the suffering of the Orlandi family, particularly her mother," Gisotti said. Opening the tombs at the family's request was another sign of that concern. 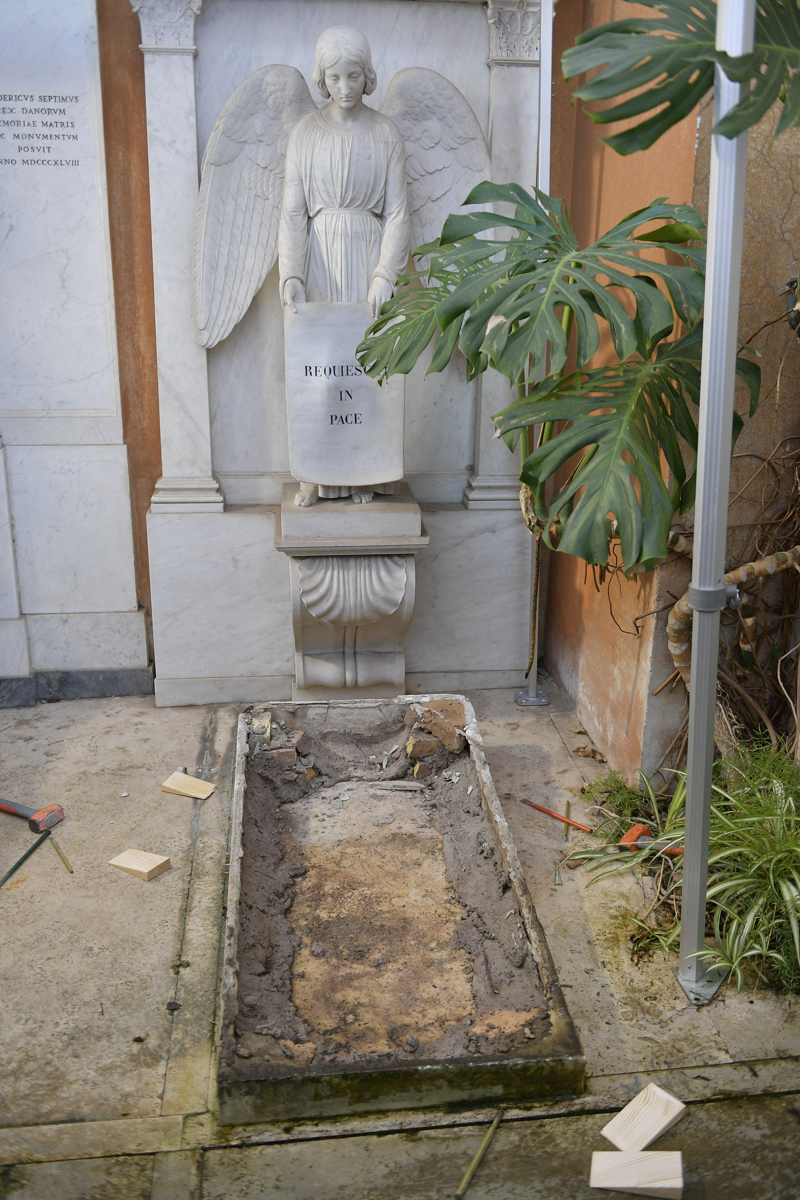 The tomb of Princess Sophie von Hohenlohe, who died in 1836, is pictured during its opening for a forensic investigation in the Teutonic Cemetery at the Vatican July 11, 2019.

For decades Orlandi's case has been the obsession of conspiracy theorists who linked her disappearance to Freemasons, organized crime, the attempted assassination of St. John Paul II and other unsubstantiated theories.

Gisotti said that under a marble slab that was believed to be Princess Sophie's tomb there was a large subterranean opening, measuring four meters by 3.7 meters (13 feet by 12 feet), "completely empty".

Moving on to the presumed tomb of Duchess Charlotte, Gisotti said, "no human remains were found."

Relatives of both women were informed, he said.

On the eve of the opening of the tombs, Andrea Tornielli, editorial director of the Dicastery for Communication, interviewed Giovanni Arcudi, the forensic anthropologist who was to lead the scientific investigation of the remains in the two tombs in the Vatican's Teutonic Cemetery.

In the interview, published July 10, Arcudi emphasised the need for careful analysis of the remains in the tombs before knowing if they could provide answers to the Orlandi case, which has remained unsolved for more than three decades.

"Apart from the morphological examination of the bones, the DNA examination will be done in any case to reach certainties and to exclude in a definitive and categorical way [whether] there is some evidence in the two tombs that can be attributed to poor Emanuela," Arcudi said.

The anthropologist had expected to find bones in the tombs and had planned to extract and clean them and piece together the skeletal remains to determine the number of deceased persons that were buried as well as their age and sex.