Westminster attempting to introduce 'abortion by the backdoor' in Northern Ireland

Analysis: Does the lifting of immunity in France mark a shift in the Vatican's handling of abuse?

Regardless of whether it becomes policy to lift immunity, a precedent has been set 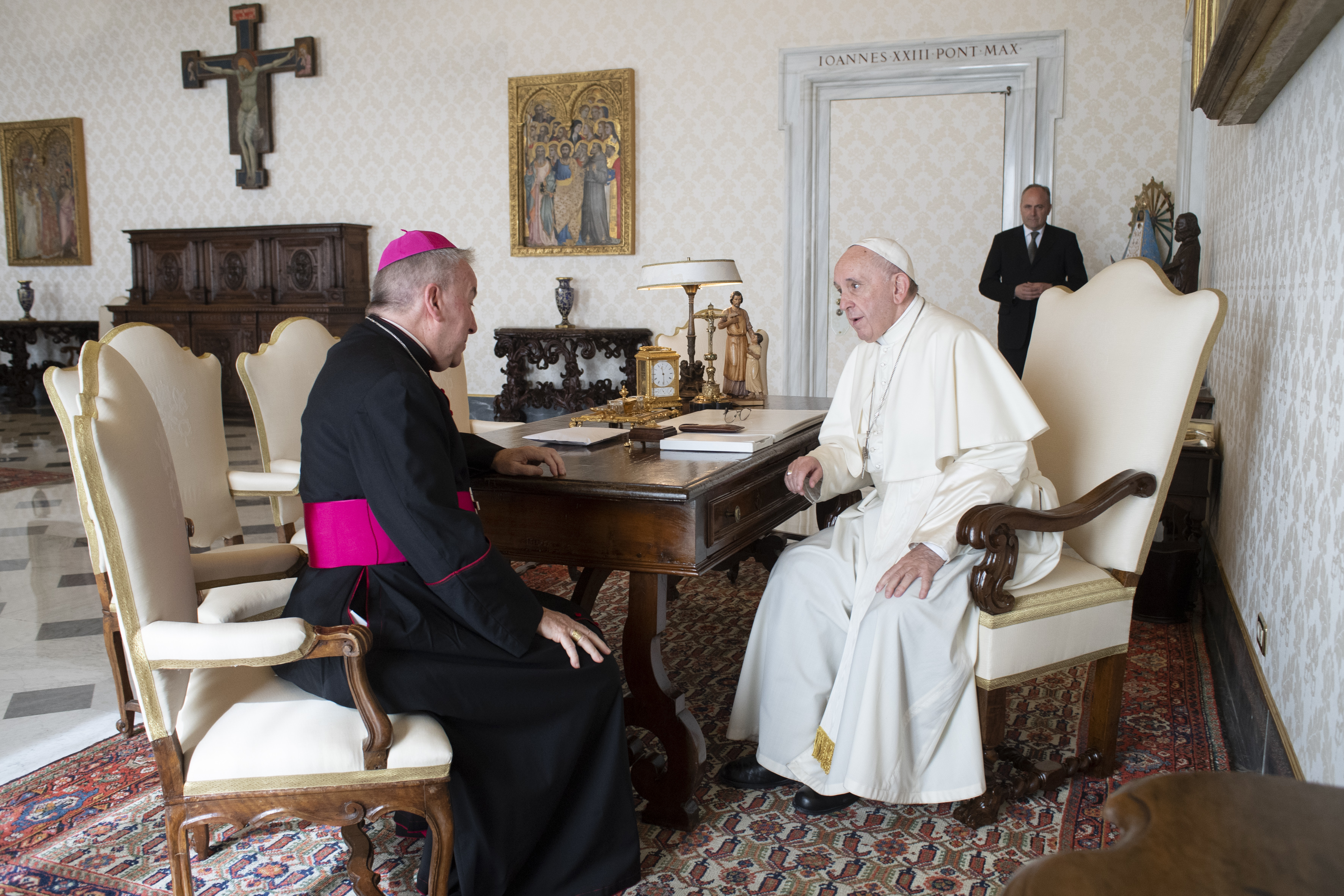 Archbishop Luigi Ventura, the Vatican nuncio to France, meets with Pope Francis at the Vatican in this file photo from Oct. 18, 2018
CNS photo/Vatican Media

The Holy See has announced it will lift the diplomatic immunity of its ambassador to France, who is accused of inappropriate touching and groping by numerous men.

As a result, the path is cleared for Archbishop Luigi Ventura to be prosecuted by the French authorities over the allegations, with one incident said to have taken place at the Paris town hall at a mayoral address to diplomats.

“This is an extraordinary gesture that confirms the wish of the Nuncio, as he said at the very beginning of this matter, to collaborate fully and voluntarily with the French judicial authorities,” a spokesman for the Vatican explained.

The decision by the Holy See is a remarkable one and marks a significant shift in the Vatican’s approach to such cases.

It indicates an awareness of the damage done by the abuse crisis, and how it is no longer sustainable for the Holy See to use the protection afforded to diplomats when allegations of sexual misconduct arise.

Up until now the Vatican have been reluctant to waive immunity for their diplomats accused of abuse. In August 2017, the Holy See recalled Mgr Carlo Capella, an official working at the papal embassy to Washington DC after the United States’ authorities notified them that he had viewed child pornography. Both the US and Canada - where is also accused of downloading the offending material - wanted to prosecute Mgr Capella.

After he was recalled, the Vatican put the Italian diplomat on trial in their own courts and sentenced him to five years in prison.

Then there was the case of Polish Archbishop Josef Wesolowski, recalled as papal ambassador Dominican Republic in August 2013 and dismissed from his position. Soon after, the Dominican Republic started an investigation into whether he had sexually abused boys. Wesolowski was laicised following a canonical trial and died in 2015 of a heart attack while awaiting a Vatican City State trial for possession of child pornography.

The decision to recall diplomats facing prosecution is in line with international law as set out by the Vienna Convention of 1961, and immunity is often claimed by countries such as the United States, even for relatively minor infringements.

It is hard to say definitively whether the Holy See will now operate a blanket policy of lifting immunity when allegations against diplomats are made. A lot will depend on the jurisdiction any papal representative is serving in, and its more likely the Vatican will proceed on a case-by-case basis. One factor in the decision over Archbishop Ventura is that in a few months, on 9 December 2019, he will turn 75, the episcopal retirement age. The Pope has also just issued two sets of laws on handling abuse, one for the Vatican City State and another for the universal Church.

Regardless of whether it becomes policy to lift immunity, a precedent has been set. It is a recognition of how the Church must co-operate with civil authorities on abuse in order to protect the sovereignty of the Holy See. That sovereignty - which rests on the recognition by countries of the Vatican as a state -  supports the diplomatic mission of the papacy across the world including in places such as Syria and South Sudan. But if countries such as France believe the Vatican is using the immunity of diplomats given to sovereign states so it can shield offenders from justice it raises potentially serious problems.

Finally, the lifting of diplomatic privilege is another reminder that the abuse crisis is removing the free-passes the Church might have been afforded in years past by countries such as France, known as the "eldest daughter of the Church." The Vatican can no longer handle allegations involving its diplomats though “in-house” legal procedures: it must also co-operate with secular justice.