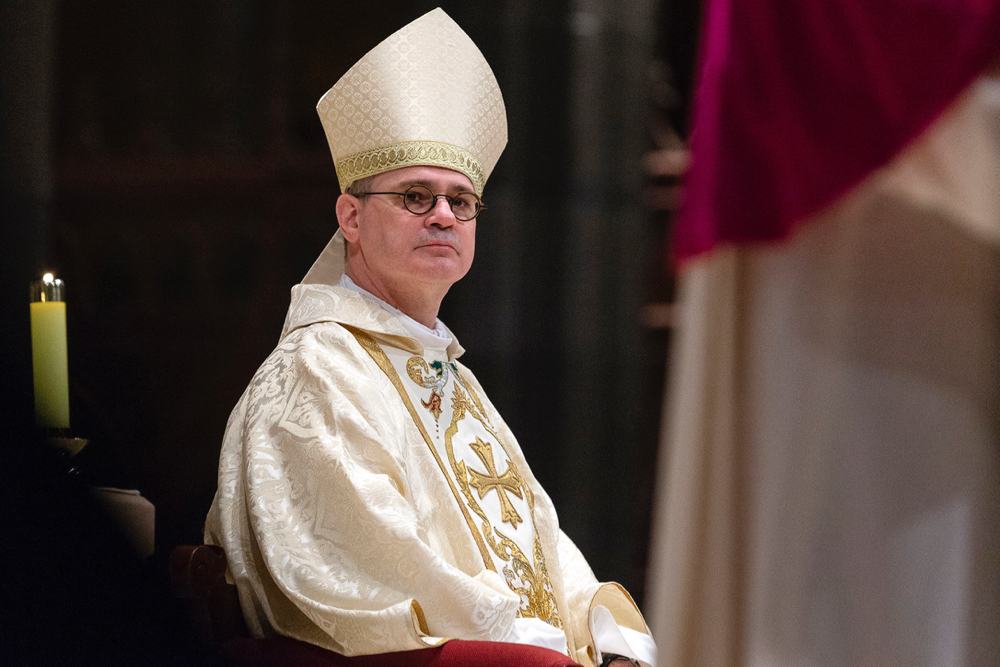 Archbishop of Melbourne on healing the 'hurting' church 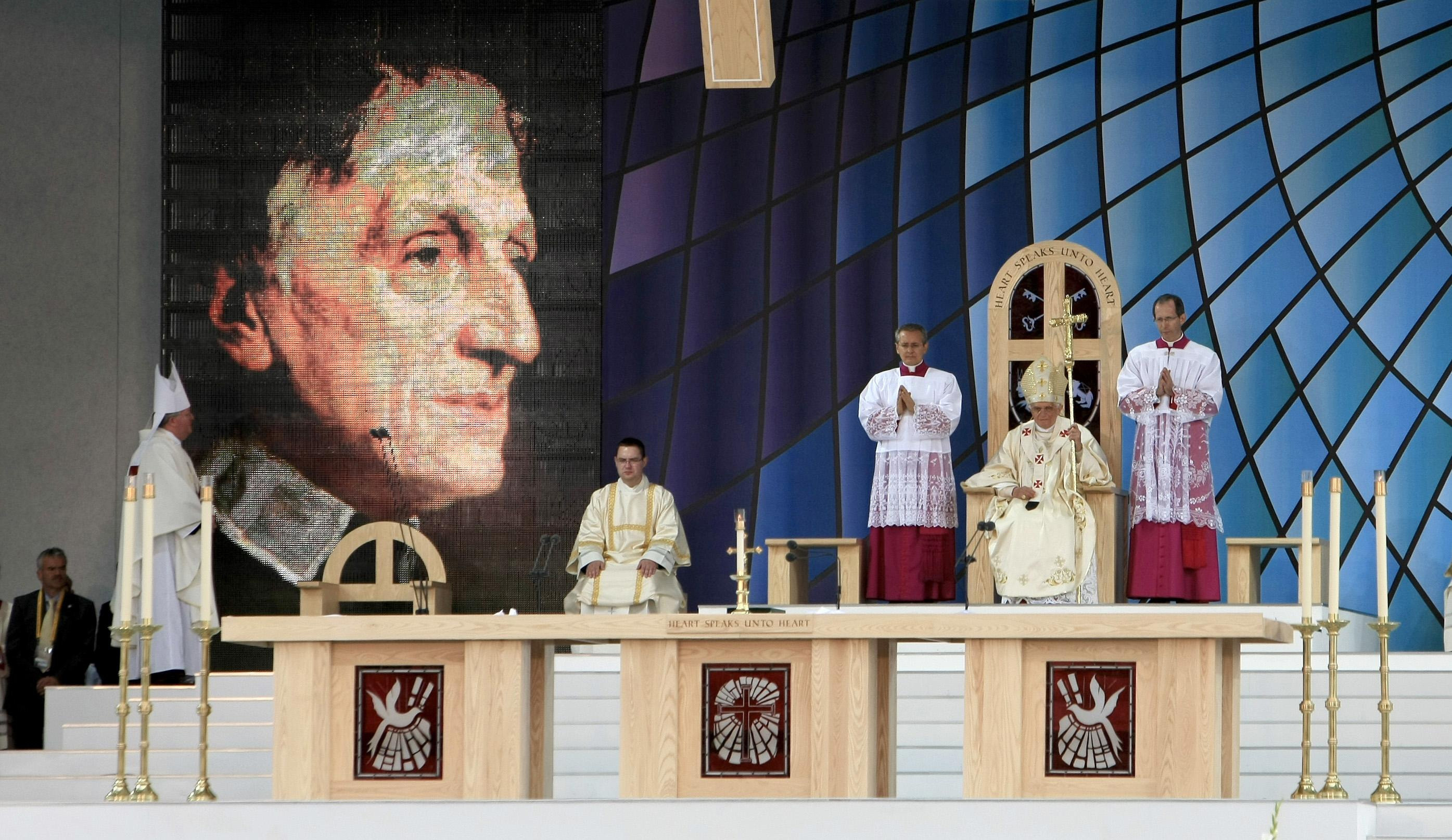 Pope Benedict XVI during the 2010 Mass to beatify Cardinal John Henry Newman at Cofton Park, Rednal, Birmingham on the last day of his State Visit to the UK.
David Jones/PA Archive/PA Images

The Blessed John Henry Newman, one of the most significant figures of the 19th century, will be declared a saint on 13 October 2019.

Pope Francis made the announcement of the date today during a public consistory for the causes of canonisations in the Vatican on 1 July.

The English cardinal is to be canonised at a ceremony led by Pope Francis in St Peter’s square, and will be raised to the altars along with four others.

Newman is the first English person who has lived since the 17th century to be recognised as a saint by the Catholic Church. The last canonisation from the UK was John Ogilvie, the Scottish martyr canonised by Paul VI in 1976 who also declared the forty martyrs of England and Wales saints in 1970.

The canonisation of Newman is remarkable given his journey from Anglican priest to cardinal of the Roman Church, while his hymns, poetry and theology have made a global contribution to the canon of Christian literature and spirituality.

The Fathers of the Birmingham Oratory were among those celebrating the canonisation that will take place alongside that of four others.

Newman (1801-1890) was ordained as a Church of England priest and soon became the leader of the Oxford Movement but converted to Catholicism in 1845. He founded the Oratory in England and was later made a cardinal. When he died at the age of 89, more than 15,000 people lined the streets of Birmingham for his funeral.

The cause for his sainthood was opened in 1958 and he was declared Venerable by Pope Saint John Paul II in 1991 after his life of "heroic virtue" was recognised. Pope Benedict XVI declared him Blessed in Cofton Park near Birmingham in September 2010, as part of his historic visit to Britain.

The canonisation was made possible by a second miracle attributed to the intercession of Blessed John Henry Newman, consisting in the medically inexplicable healing of a pregnant woman with life-threatening complications due to her pregnancy. The cure took place in Chicago, USA, in May 2013. After an initial investigation carried out by the archdiocese of Chicago, it was submitted to the Holy See in 2018, and approved by Pope Francis on 13 February 2019.

During the ceremony for his beatification in 2010, Pope Benedict said that Newman “tells us that our divine Master has assigned a specific task to each one of us, a ‘definite service’, committed uniquely to every single person.”

Benedict continued: “The definite service to which Blessed John Henry was called involved applying his keen intellect and his prolific pen to many of the most pressing ‘subjects of the day’. His insights into the relationship between faith and reason, into the vital place of revealed religion in civilised society, and into the need for a broadly-based and wide-ranging approach to education were not only of profound importance for Victorian England, but continue today to inspire and enlighten many all over the world.”

Fr Ignatius Harrison, Provost of the Birmingham Oratory which was founded by Newman in 1849, said: “Newman's lifelong success in bringing others to Christ shows us that the apostolate of Christian friendship achieves much more by attracting people to the Lord than by aggressive polemic. Newman's long and incremental spiritual pilgrimage shows us that God leads us to Himself step by step, in ways that He customises to our individual needs, and in His own good time.”

Cardinal Vincent Nichols, Archbishop of Westminster, said: “This is a moment of great pride. On Friday it was the feast of the Sacred Heart and we held a mass for the priests of England and Wales. Foremost in our minds was the declaration of a saint who was a priest here. John Henry Newman is known for many great qualities, but we remember him particularly for the kindness and compassion of his ministry to the people of Birmingham. At his death they turned out in their thousands to salute a much loved priest on his funeral procession from Birmingham to Rednal.”

The other blesseds to be canonised alongside Newman are Giuseppina Vannini, Mariam Thresia Chiramel Mankidiyan, Irmã Dulce Pontes and Marguerite Bays.

Information about Cardinal Newman including details of his life, of the miracle and the process of canonisation, links to his writings as well as photos and videos available to media, can be found at www.newmancanonisation.com.

Given the context, it is appropriate that the English priest will be declared a saint by a pope who has sought to implement Vatican II, and during the synod of bishops assembly on the Amazon, a structure established by Paul VI as the council drew to a close. Newman’s writing on the primary of conscience, which he described as “the aboriginal Vicar of Christ”, is also echoed in Francis’ family life teaching, Amoris Laetitia, which opens the door for remarried divorcees to receive communion. The pope has said Amoris Laetitia is an attempt to move away from legalistic casuistry, and canonical manuals to a deeper understanding of applying moral laws

The British Ambassador to the Holy See, Sally Axworthy, said: “I am delighted that Pope Francis announced the canonisation of Cardinal John Henry Newman this morning.

“Cardinal Newman had a major impact on Catholic theology and on education worldwide, making him a truly global Briton. I enjoyed learning about his life and teachings during my recent visits to the London, Birmingham and Oxford Oratories. He brought his experience from the Anglican Church to his work as a Catholic, bridging the two traditions.

“The canonisation will be an important moment for Britain, and for UK-Holy See relations. I very much look forward to the celebrations.”

The Church of England also warmly welcomed the announcement.

"An important theologian, preacher and pastor in his years as an Anglican priest, he was one of the key leaders of the Oxford Movement that heralded a revival in the life of the Victorian Church of England that spread around the Anglican Communion. He remains a central figure in both Catholic and Anglican theology: a profound scholar, powerful preacher and the founder of religious communities," the CofE said in a statement.

Bishop of Portsmouth Christopher Foster, co-chair of the English and Welsh Anglican-Roman Catholic Committee, said: “The canonisation of Blessed John Henry Newman is very good news for the Catholic Church in England and Wales, and we give thanks with them for this recognition of a holy life formed in both our communions that continues to be an inspiration for us all.

“Both as an Anglican and as a Catholic, his contribution to theology, to education and to the modelling of holiness resonates to this day around the world and across the churches.”

Along with his colleagues in Oxford in the 1830s and 1840s, Newman contributed to a renewal in the understanding of Anglicanism as standing in continuity with the early and medieval Church. The work of Newman, Pusey, Keble and others from this period had profound effects on liturgy and worship; church architecture; theological study; pastoral practice; missionary work; spirituality and the religious life. The movement they led within the Church of England became known as Anglo-Catholicism.

A delegation representing the Anglican Communion and the Church of England will be present at the canonisation in Rome on 13 October 2019.