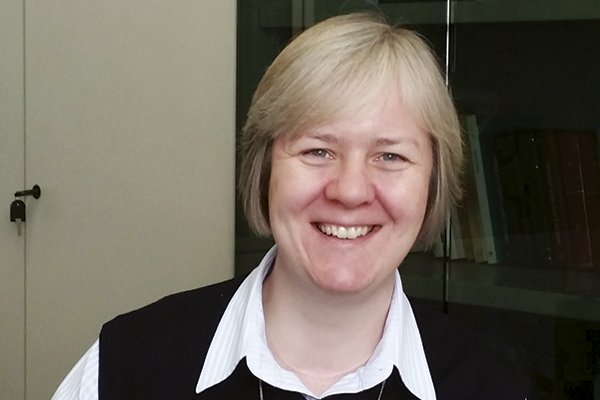 A woman has been appointed director of the National Office for Vocations (NOV) for the first time. Sr Elaine Penrice (above), of the Daughters of St Paul, has been working as Religious Life Promoter for the NOV for three years, and also works as Productions Coordinator at Pauline Books & Media and on the leadership team of the Daughters of St Paul with responsibility for vocations ministry.

Bishop suspended
The Bishop of Lincoln, Christopher Lowson, has been suspended. In a statement the Archbishop of Canterbury, Justin Welby, said it was in relation to a safeguarding inquiry but added: “I would like to make it absolutely clear that there has been no allegation that Bishop Christopher has committed abuse of a child or vulnerable adult.” Bishop Lowson said: “I am bewildered by the suspension and will fully cooperate in this matter.

Pax Christi UK members and supporters gathered in London last weekend for the Annual General Meeting of the Catholic peace movement. New Director Theresa Alessandro said that among the priorities for the movement were morally responsible investment in Israel and Palestine, the European elections and nuclear disarmament.

Gay marriage vote
Gay couples should be allowed to marry in Methodist churches, according to a report released ahead of this summer’s Methodist Church Conference.

The Methodist Church’s Marriage and Relationships Task Group called on the Church to affirm same-sex partnerships, and, where appropriate, to “bring them to seek marriage as the Church understands it”.

“We believe it would be appropriate for the Church to offer thanks for and bless such partnerships on its premises. This would require developing and offering appropriate forms of prayer and orders of service,” the Group concluded. Its recommendations will go before the Methodist Conference in Birmingham from 27 June to 4 July.

A new, 210-place Catholic voluntary aided primary school is to open in the Diocese of East Anglia, on the site of the current Sacred Heart School in Swaffham, Norfolk. The 100-year-old Sacred Heart School is due to close at the end of the summer term and the new school will open on 1 September.

Pope Francis has recorded a video message for Christians participating in Thy Kingdom Come, a movement of prayer between Ascension and Pentecost launched four years ago by the Archbishops of Canterbury and York.

In an introduction to the recording posted on the Archbishop’s Twitter account, Justin Welby says he “cheekily” asked Pope Francis, whom he describes as “extraordinary”, to record the message.

Pope Francis, who refers to the Archbishop of Canterbury as “my brother”, exhorts Christians to ask the Holy Spirit to enlarge their hearts.

Ahead of the European Parliament elections this week, the Irish bishops have appealed to the electorate to vote for the common good rather than local or national interests. In a statement, the bishops said the elections were taking place at a “crucial juncture in the history of Europe” and warned that the EU faces profound challenges. Referring to Brexit, the bishops said that given its “potentially profound and far-reaching implications” for all citizens in Ireland, North and South, participating in the European elections in an informed and conscientious way had “rarely been more important”.

The waning popularity of Knock Marriage Introductions’ traditional matchmaking, which was pivotal in 960 marriages over 51 years, has been blamed on online dating and dating apps.

According to the director, Fr Stephen Farragher, it is “no longer viable” to run the service, which is based at Knock Shrine (pictured) in Ireland, and so the decision has been taken to wind it down. Over the past two years, the agency was helped by donations from the bishops which supplemented the income generated from a declining subscriptions base.