Draft for reform of the Curia ‘deeply flawed’ says Muller

Pope draws lessons from Mother Teresa in city of her birth

Francis prayed for Christians 'to become signs of love and hope in our own day when so many are poor, abandoned, marginalised and migrants' 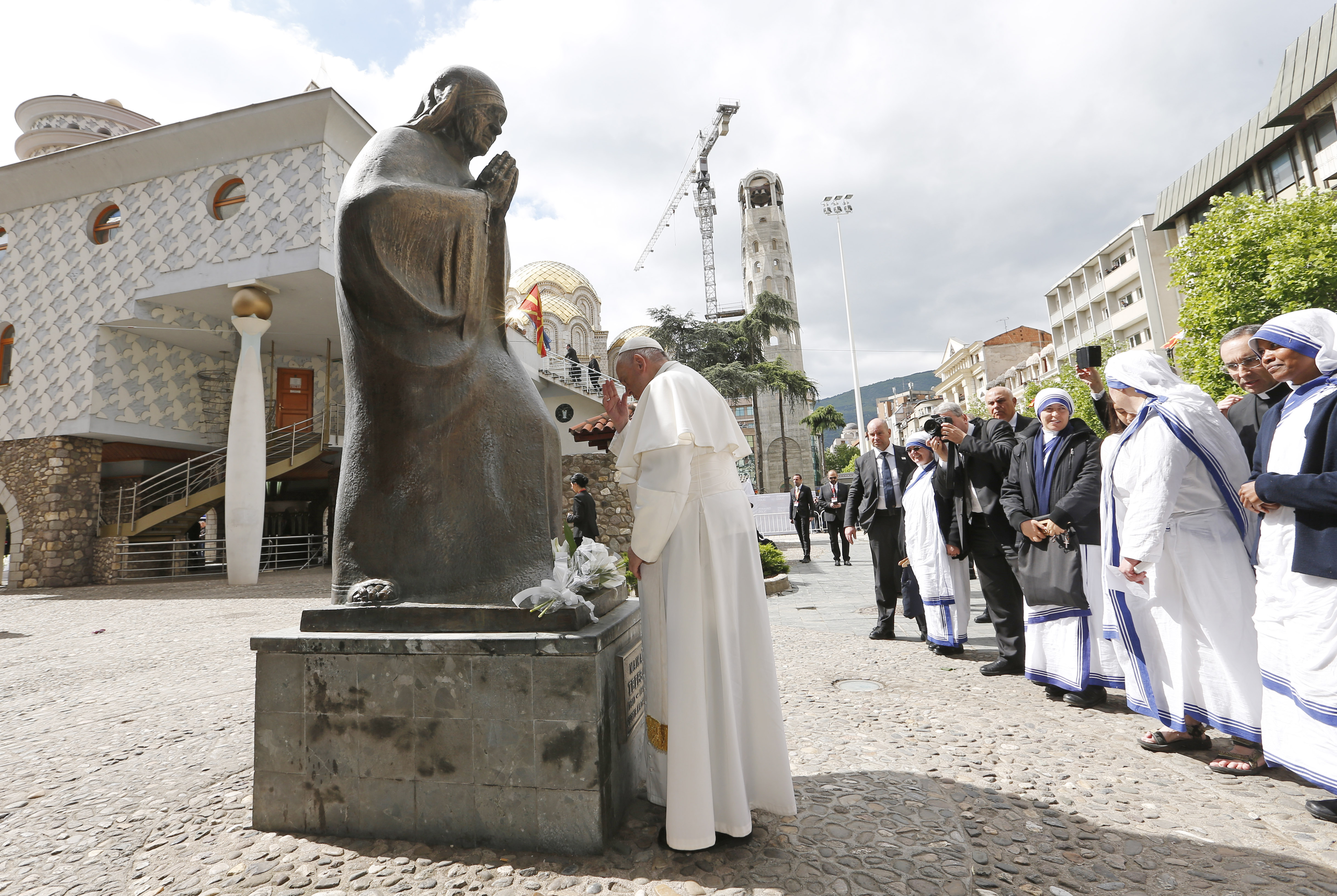 Pope Francis prays in front of a statue of Mother Teresa at the Mother Teresa Memorial during a meeting with religious leaders and the poor in Skopje, North Macedonia,
CNS photo/Paul Haring

Pope Francis went to the tiny Balkan nation of North Macedonia to pay tribute to a tiny saint who accomplished big things: St. Teresa of Kolkata.

Mother Teresa was born Agnes Ganxhe Bojaxhiu to Albanian parents in Skopje Aug. 26, 1910, so after paying the obligatory formal visit to North Macedonia's president, Pope Francis went May 7 to the memorial and museum built on the site of the church where she was baptised. The church was later destroyed in an earthquake.

"Moved by the love of God," the pope told the president, Mother Teresa "made love of neighbour the supreme law of her life."

At the memorial, Pope Francis did not speak about the saintly founder of the Missionaries of Charity, but after praying silently before her relics, he praised God for the gift of her life and prayed for her intercession for North Macedonia.

Pope Francis also prayed that God would give Christians the grace "to become signs of love and hope in our own day when so many are poor, abandoned, marginalised and migrants."

Among the guests present at the memorial were dozens of Missionaries of Charity, about 100 of the people they serve in Skopje, and two of Mother Teresa's cousins, the Vatican said.

Celebrating Mass in the nearby Macedonia Square on a brisk spring morning, Pope Francis drew people's attention to human hungers -- the hunger for bread, but also the hunger for truth, for God and for love.

Too many people, he said, "have become accustomed to eating the stale bread of disinformation," and so they end up being prisoners of a worldview that makes them either indifferent to others or downright hostile.

Christians must never be afraid to tell God that they are hungry "for an experience of fraternity in which indifference, disparagement and contempt will not fill our tables or take pride of place in our homes," he said. "We are hungry, Lord, for encounters where your word can raise hope, awaken tenderness and sensitise the heart by opening paths of transformation and conversion."