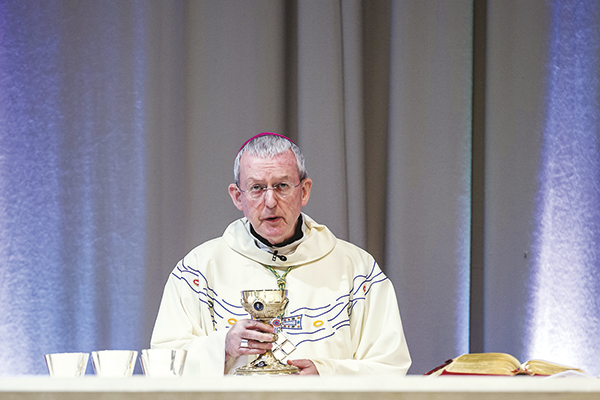 Bishop Declan Lang of Clifton (pictured) has called on Catholics to speak out against the death penalty and pray for those at risk of execution worldwide. He urged the Government to redouble its efforts to promote its abolition.

Responding to new statistics that showed an international decline in the number of known executions of more than 30 per cent in 2018, Bishop Lang, the English and Welsh bishops’ lead for international affairs, said: “The continued decline in capital punishment gives us cause for hope that this attack on the inviolability and dignity of every person may eventually be confined to history.”

He called on the Government to use diplomatic and economic pressure to promote the end of the death penalty, saying: “For example, the UK has trade offices in more than half of the 20 countries that executed their own citizens last year.”

CofE to probe housing crisis
The Archbishop of Canterbury, Justin Welby, has launched a Commission on Housing to assess what contribution the Church of England can make to solving Britain’s housing crisis. The commission, chaired by Charlie Arbuthnot, an expert in social housing, will convene theologians, economists and academics over 18 months to explore a Christian perspective on housing policy.

“Britain’s housing crisis is one of the major challenges facing this country – and it is hitting the poorest the hardest,” said Archbishop Welby. “While there is significant work being done to find solutions, the Church has something unique to contribute.”

The pro-life charity Right to Life has warned that new abortion guidelines recommended by the National Institute for Clinical Excellence (NICE) will “rush women” through the abortion process. Draft recommendations include encouraging self-referrals instead of consultations with a GP and reducing the time women are required to wait.

A spokesperson for the charity, Clare McCarthy, said: “This is a reckless approach to health care. Women’s safety and mental or physical health should never be potentially compromised for the sake of expediency or convenience.”

The Bishops’ Conference of England and Wales has attacked the Government’s plans to make divorce easier. Under new proposals couples will no longer have to attribute blame to a partner to procure a contested divorce, which the Government says will reduce family conflict.

The Bishop of Northampton, Peter Doyle (pictured), said the proposals were flawed. The bishop, the conference’s lead for marriage and family life, told Catholic News Service: “If notice can be given by just one party that they wish to leave the marriage without any recourse for the party that has been left, the equality and validity of that contract and the commitment and trust vital for its success will be undermined at the outset.

“It may, in fact, push couples headlong into making new arrangements for themselves and their children without first giving them the time necessary to work through the decision to end the marriage.”

Bishop denies eulogy ban
The Bishop of Motherwell has denied that he is trying to ban family eulogies at funerals and is merely guaranteeing that the integrity of the Requiem Mass is observed. Bishop Joseph Toal says his letter to parishes, which is similar in tone to instructions in other Scottish dioceses, has been misrepresented. He said that while he had not seen any of the newspaper reports suggesting that he had banned eulogies, “that was not intended to be the case”.

Pope Francis has appointed Archbishop Eamon Martin of Armagh as Apostolic Administrator of the Diocese of Dromore in Northern Ireland, releasing Bishop Philip Boyce from the role.

Last year, Bishop Boyce, the retired Bishop of Raphoe, took up the role in Dromore at short notice following the resignation of Bishop John McAreavey over criticisms of his “error of judgement” in officiating at the funeral of abuser Fr Malachy Finegan in 2002.

Archbishop Martin thanked Bishop Boyce for giving up a full year of his retirement to take on responsibility for Dromore.

The Diocese has a Catholic population of 90,000 across 22 parishes. There are 25 priests in active ministry.