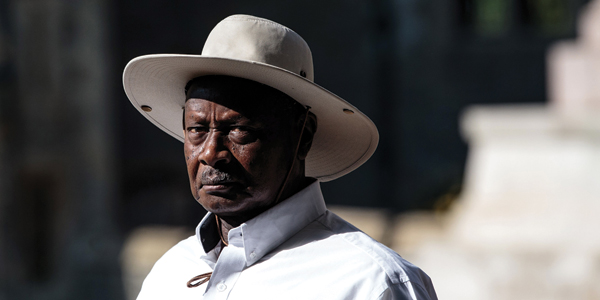 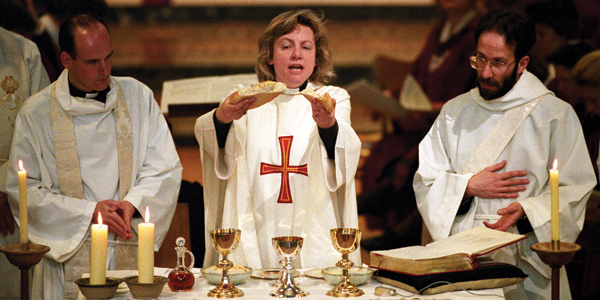 The Church of England has celebrated 25 years of women’s ordination to the priesthood with a celebration at Lambeth Palace.

More than 80 women priests attended the service, including the first woman to be ordained, the Revd Prebendary Angela Berners-Wilson (pictured in March 1994). Five women bishops were also in attendance as well as laypeople who had campaigned for women’s ordination and ordinands. The Chaplain to the Archbishop of Canterbury, the Revd Dr Isabelle Hamley, preached.

Speaking at the service the Archbishop of Canterbury, Justin Welby, said: “Many of those here today have been pioneers as they work out what it means to be an ordained woman in the Church of England – not just for them­selves and their communities, but for the whole of the Body of Christ. Today let us bear witness to those who paved the way in 1994, as well as upholding those whose way into ministry has been opened up since.”

The Jesuit Refugee Service has welcomed a landmark ruling that the government’s “Right to Rent” scheme is unlawful. At the High Court Mr Justice Spencer, who presided over the case, found the scheme, which demands landlords check the immigration status of tenants or face fines of up to £3,000 and a potential prison term if they fail to do so, caused racial discrimination against those without British passports.

Sophie Cartwright, JRS UK’s policy officer, called the ruling “fantastic”. She said: “The Right to Rent scheme is ... both cruel and dangerous. The scheme – and indeed the entire hostile environment agenda – must be abandoned immediately.”

The legacy of abuse within the Church has made it hard for bishops to speak out on social issues, Cardinal Vincent Nichols has said. Preaching at a Mass for the Catholic Union, Cardinal Nichols said: “If I as a bishop put myself forward, then I’m asking for trouble because of the way in which evil, and a particular evil – the abuse of children – finds a lodging in the Church,” he said.

He told members of the Catholic Union, a lay organisation that promotes public engagement for the common good, that the Catholic presence in politics and governance had flourished since the Catholic Relief Act of 1829. That Act, which allowed Catholics to take public office, “caused a great deal of controversy”, he said. “But in its wake, Catholics had become prominent in education, medicine, charities and the arts.”

The Catholic and Church of Ireland archbishops of Dublin have issued a joint statement condemning the theft of an 800-year-old mummified head from a Dublin church.

Archbishop Diarmuid Martin said that the desecration of a mummy, known as “The Crusader”, was a “horrible vandalism of a peculiar kind”. Archbishop Dr Michael Jackson called the damage barbaric.

The Church of St Michan’s in Dublin was founded in 1095.

The crypt of the church, where the mummies were entombed, is believed to have inspired Bram Stoker to write Dracula.

Organisers of the Lambeth Conference, a gathering of bishops from the Anglican Communion, have come under fire for excluding the spouses of gay members from its 2020 summit. Guidance for attendees on the Lambeth Conference website read: “The Archbishop of Canterbury is sending personal invitations to every eligible bishop and spouse (excluding same-sex spouses) and is looking forward immensely to hosting them”.

That guidance was later amended to read, “to every eligible bishop and spouse”.

The Bishop of Liverpool, Paul Bayes, described the decision as an “act of exclusion” and a source of grief to him and his wife. He said he intended to attend the Conference alone, “in the hope of a common future”.

Catholic hospitals in Ireland that receive state funding could be forced to remove crucifixes and other religious symbols.

The recommendation was part of the Independent Review Group Report to Examine the Role of Voluntary Organisations in Publicly Funded Health and Personal Social Services.

The review was chaired by the former secretary general of the European Commission, Catherine Day (pictured).

Published last week, the review concluded that health services run by religious orders should be “cognisant of the impact of décor” on patients and “strive to ensure” their personal preferences are met to the “greatest extent possible”.

Man jailed for spitting on priest

A 24-year-old South Lanarkshire man has been jailed for spitting at a Catholic priest in Glasgow last July.

Bradley Wallace, from Uddingston, pleaded guilty to assaulting Canon Thomas White as the priest was leaving Mass, while some participants in an Orange Walk passed St Alphonsus Church, in the city’s Calton area. Wallace’s identity was confirmed from DNA taken from saliva on Canon White’s vestments.

Sheriff Andrew Cubie said: “This is about the courts reflecting disapproval of the depressingly still deep seated and widespread social issue of sectarianism.” Marching close to St Alphonsus was suspended for the remainder of the season in 2018. It has resumed this year.

The Scottish Catholic Education Service has expressed concern over a consultation exercise that includes proposals to close Catholic schools in Midlothian in a bid to close a funding gap estimated at more than £7m.

Midlothian council’s eight Catholic schools – seven primaries and one secondary – are close to capacity, but the council claims the proportion of Catholic-identifying families on the roll has been dropping.

Barbara Coupar, of the Scottish Catholic Education Service, said: “Catholic schools are chosen by parents of all faiths and none because they offer a distinctive approach to education, [which is] one aspect of the Scottish education system that makes it world-leading.”

Christine Allen has taken over as head of the Church’s international aid agency Cafod. Ms Allen, who took over from outgoing director Chris Bain on 4 March, had been Director of Policy and Public Affairs for Christian Aid since 2012.