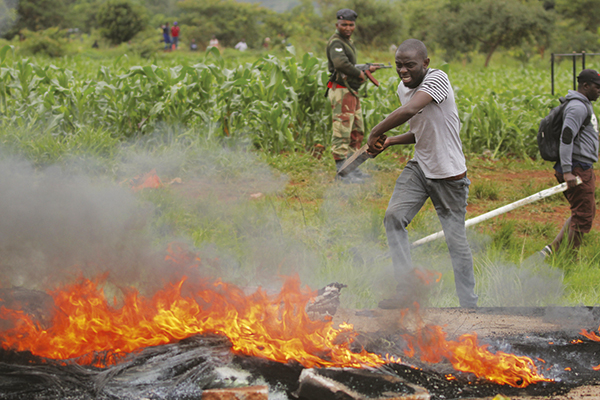 Catholic bishops in Zimbabwe have condemned their government’s “heavy-handed and intolerant handling” of widespread protests sparked by food and fuel shortages. They say the action has led to the “injury and death of innocent people”.

Civil disorder broke out on 14 January after the government more than doubled the price of fuel overnight. Protesters took to the streets of the capital, Harare, and Bulawayo, burning tyres, barricading roads and looting shops.
Access to the internet was barred and media reports said police were conducting house-to-house searches, arresting and “randomly beating” protesters.

The Zimbabwe Human Rights NGO Forum said it had recorded more than 844 human rights violations, with at least 12 deaths and 78 injuries from gunshots as well as 242 from assaults and torture. More than 466 cases of arbitrary arrests and detentions were also recorded.

In a statement on Sunday, a presidential spokesman, George Charamba, told the state-controlled Sunday Mail newspaper that the government would “not stand by while such narrow interests play out so violently. The response so far is just a foretaste of things to come”.

In a hard-hitting pastoral letter released on 17 January, the bishops write that they observed with “increasing concern and alarm” the state of Zimbabwe from the time of the military–assisted political change that took place in November 2017 to the total shutdown of major cities that began on 14 January.

They call on the government to “desist” from the “heavy-handed handling of dissent” and from “denying people their rights, including the barring of access to social media communication”.

The bishops say they have watched with “sadness” as politicians “failed to harness the palpable oneness and goodwill prevailing among Zimbabweans across the political divide” immediately after former president Robert Mugabe was ousted.

They go on to condemn their government’s “piecemeal and knee-jerk reaction” to the country’s worsening economic situation as exemplified by “the hefty increase in fuel prices on 12 January 2019”. The price increases, they write, is the “immediate cause” of the recent violent demonstrations.

“Zimbabwe is burning; its economy is hurting; its people are suffering,” they write. The bishops call for “a new and challenging kind of politics”, which is inclusive and based on strong institutions that embody the values of the country’s democracy, rather than “one or two leaders, however effective or charismatic”.

The bishops’ conclude by saying that they believe in a God of “second chances” and that there is still an opportunity to “rebuild hope, trust, confidence and stability in our country”.

On Sunday, President Em­merson Mnangagwa who has been touring central Asia, Russia and Europe in a bid to solicit investment for the country’s crippled economy, said he would return to Zimbabwe instead of attending this week’s World Economic Forum in Davos.

Zimbabwe is going through its worst economic crisis in a decade. Inflation is running at 40 per cent and unemployment at 80 per cent. People are increasingly unable to afford food, fuel or medicine.