Sainthood cause for US Archbishop Fulton Sheen abruptly suspended 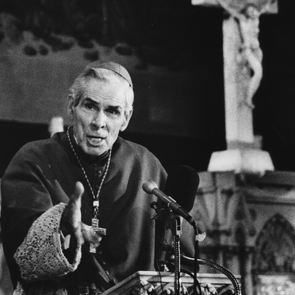 The process to make US Archbishop Fulton Sheen a saint has been abruptly suspended, just months before supporters expected the Vatican to approve his beatification.

Archbishop Sheen, who died in 1979, became known as one of the first televangelists for his Emmy award-winning preaching series Life is worth living, which drew 30 million people every week.

In a statement today the Diocese of Peoria, where he was ordained, said that a 12-year campaign to canonise Sheen had ground to a halt “for the foreseeable future” because the Archdiocese of New York refused to release his remains for the process of official inspection and to take relics.

Complaining that the Archdiocese’s change of mind only occurred once the cause had reached a “significant stage”, the diocese added: “The process to verify a possible miracle attributed to Sheen had been going extremely well, and only awaited a vote of the Cardinals and the approval of the Holy Father. There was every indication that a possible date for beatification in Peoria would have been scheduled for as early as the coming year.”

Sheen was declared Venerable by Pope Benedict XVI in 2012 and in March this year a miracle attributed to his intercession – the revival after an hour of a still-born baby boy – was sent to the Congregation for the Causes of Saints for investigation. According to the diocese, the cause has now been relegated to the Congregation’s “historical archive”.

Bishop Daniel Jenky, the President of the Archbishop Fulton J Sheen Foundation who had taken charge of the cause, was said to be “heartbroken” for Sheen’s supporters throughout the world.

Sheen spent a year serving as assistant priest at St Patrick’s, Soho Square, in London and was a regular visitor there.