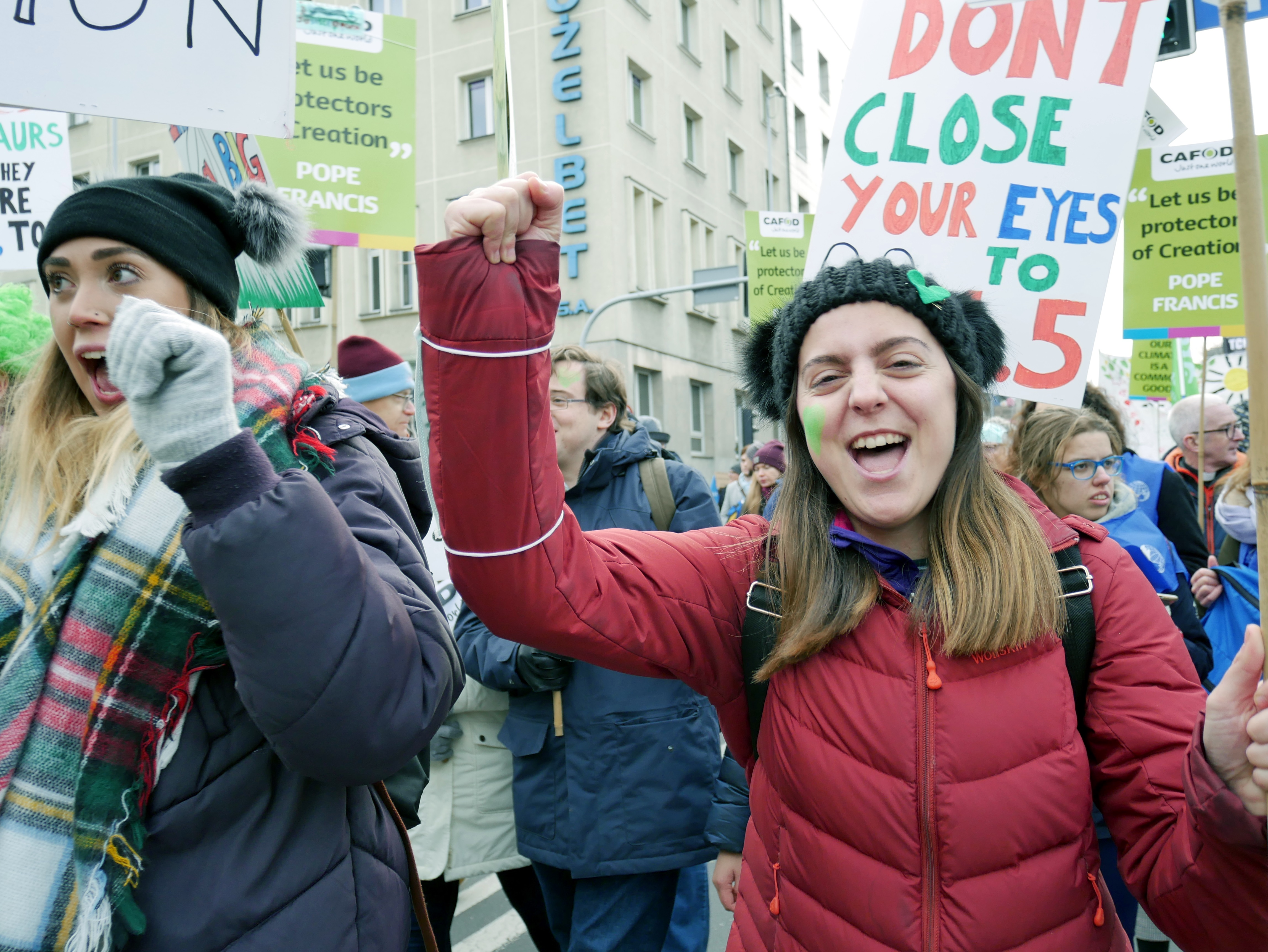 Climate talks did not heed the cries of the poor

'Two of my churches were hit by airstrikes, two others were damaged. Nothing was left but the walls. But I don't feel hopeless' 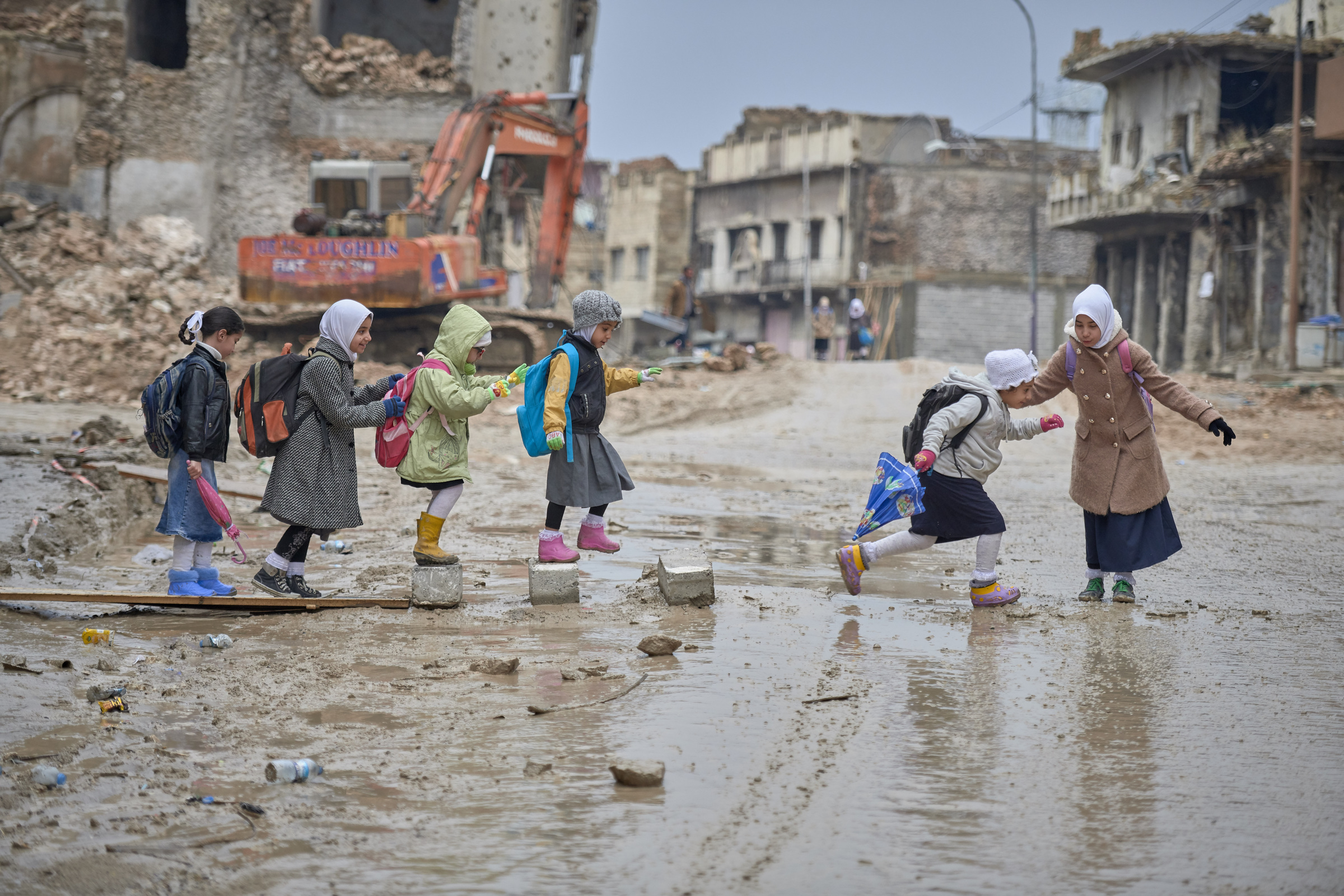 Girls navigate a muddy street on as they make their way to school amid the rubble of the Old City of Mosul, Iraq, 5 December
CNS photo/Paul Jeffrey

Christians are cautiously returning to Mosul, the once-bustling Iraqi city that for three years was the capital of the caliphate established by the Islamic State group.

They just aren't spending the night.

"There are almost no Christians in Mosul at night. During the day, there may by 60 or 70 Christians who come here to work, along with up to a thousand Christian students at the University of Mosul, but they go back to safer towns at night," Father Amanuel Adel Kloo told Catholic News Service.

Father Kloo, a Syriac Catholic, was the last priest to leave Mosul after it was seized by Islamic State, also known as Daesh or IS, in 2014. He remained for a month after the takeover, but eventually left, fleeing to Irbil.

"At the beginning they tried to show people they were good, that they would simply control the area and things would be normal. But then they showed their true face," he said.

In Irbil, he ran a camp for hundreds of displaced Christian families, but soon after Mosul was liberated by Iraqi forces in 2017, he began returning to the war-ravaged city.

In parts of the city, particularly on the wealthier east side of the Tigris River, recovery has been swift. Today, restaurants are packed and businesses flourish. But in the western portion of Mosul, particularly the old city, block after block of rubble hides decomposing bodies and unexploded ordnance, the legacy of months of heavy fighting and airstrikes as Islamic State fighters made their last stand, often using residents as human shields.

"They called it our liberation, but it was really our destruction," said Hussain Ahmed, an Islamic teacher in the old city who has returned to live in the remnants of his heavily damaged house.

"It was sad to see the city destroyed," said Father Kloo. "Two of my churches were hit by airstrikes, while two others were damaged. And what was left was looted. Daesh sold the windows and doors and light fixtures. Nothing was left but the walls. But I don't feel hopeless. I have returned to Mosul to rebuild and carry the cross high."

Many Christian homes in Mosul were occupied by IS fighters during the occupation, but Father Kloo said that, following the liberation of the city, other residents looted many of the houses.

"I started working with the police and army to solve this problem, and they put an end to it," he said.

While in Mosul, at night the priest sleeps in the home of a Christian family that is too frightened to return, and by day he supervises the rebuilding of Our Lady of the Annunciation Church. Beside the church he plans to build a dormitory, so Christian university students will have a place to stay and no longer need to commute through a maze of checkpoints run by the police and army, as well as the dreaded Hashed al-Shaabi militia posts where both Christians and members of the local Sunni majority are regularly harassed and threatened by Shiite militants.

"Many Christians come to Mosul every day but leave before night. My hope is that if there's a priest and a church here, they will feel safe and begin to stay," said Father Kloo.

It might take more than the presence of a priest to convince many that Mosul is safe. Iraqi security forces continue to arrest Islamic State fighters who have tried to blend into the civilian population. The army has renewed air strikes against IS fighters holed up in caves and tunnels in nearby mountains. And the car bombing of a Mosul restaurant on Nov. 8, killing three people, served as a graphic reminder that IS is not totally defeated.

"Daesh isn't gone," Father Kloo said. "There are sleeper cells and fighters who have merely shaved off their beards. But the bigger problem is that 70 percent of the people in Mosul, though they may not have a weapon, retain the mentality of Daesh."

The Islamic State isn't the only threat to Mosul's tentative peace, the priest said.

"Whether Daesh comes back or not, other groups will rise up to fight against the Shia militias. People in Mosul are Sunnis, backed by Saudi Arabia, while the Shia militias are backed by Iran. And Turkey and the U.S. are now involved. We have no real borders. Iraq has become a battlefield for everyone to play. The government is very corrupt, and we have no one who is patriotic and loves their country more than their religious faction," he said.

Although peace prevails for the moment in Mosul and Father Kloo's church is getting rebuilt, Christians remain wary.

Hind Saffa Jijji is a Catholic displaced from Mosul. After living in Irbil during the war, she has relocated to Qaraqosh, a largely Christian town liberated from Islamic State control in 2016.

"Our family still has a home in Mosul. ISIS families lived in it, but now it is empty. My father and mother went to see it. Although the house is still there, our furniture and all our things were stolen," said Saffa, who manages livelihood projects for a women's association.

But more than furniture is missing, she said. The trust that once wove different faiths together into one neighborhood vanished during the war, when many Christians felt betrayed by Muslims they had considered their friends.

"It's hard to live alongside people and suddenly lose trust in them. All of a sudden you aren't sure they won't hurt you or cause you harm," Saffa said. "I was studying in the university when ISIS came, and some students started posting things supporting them. They had been my friends. How can I go back now to be with people who I thought were my friends but suddenly changed? How can I be sure they won't change again?"

Hussain Ahmed, the Islamic teacher, said Christians would be safe and are welcome to return.

As he took a journalist on a tour of his neighborhood, he stopped at a house that he said is owned by a Christian woman but was used by foreign Islamic State fighters during the occupation. The badly damaged house is pockmarked by bullet holes. A gaping hole was blown in one wall so that combatants could move house to house without being seen from the air. An unexploded mortar rested on the second floor. And amid the rubble were women's makeup and lingerie. Ahmed, who was formerly an imam at a local mosque but had to step down after he refused to bless the Islamic State fighters, says the lingerie was used behind closed doors by the women who accompanied the foreign militants.

Ahmed hasn't heard from the Christian woman who once who lived in the house. He said she was widely known for her baking skills.

"Muslims and Christians from all across the city would come here to buy her baklava for their weddings," he said. "Everyone here hopes she will come back soon."