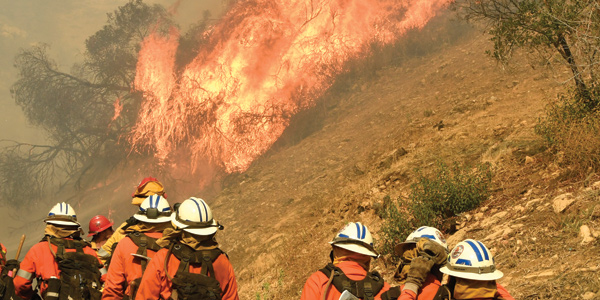 As wildfires continued to rage at both ends of California, the official death toll stood at 42 as the The Tablet went to press. Another 228 remain unaccounted for as crews step up the search for bodies and missing people. Paradise, a town of 27,000, was largely incinerated last week.

Bishop Jaime Soto of Sacramento described the fires in his diocese as “devastating”. “The families in Paradise and the surrounding communities affected by the fire can rely on the support of our prayers. We also pray for the brave men and women responding to this disaster and battling the fires.”

A report from UN agencies released last week found that 3 million people have fled the Socialist regime in Venezuela of President Nicolás Maduro; 2.4 million of these Venezuelan migrants and refugees are living elsewhere in Latin America or in the Caribbean. The Catholic Church has been active in the region supporting Venezuelans, but South American officials have called for more support.

A second regional meeting bringing together a dozen countries, along with aid organisations and UN agencies, to discuss ways to cope with the exodus, will take place in Quito, Ecuador, on 22 and 23 November.

The apostolic vicar of Southern Arabia, which includes Yemen, has sounded the alarm over the humanitarian crisis in the country. “A war is ongoing in Yemen but the big world does not seem to be very interested,” Bishop Paul Hinder said. “The warring parties have to be pressured to sit around the table and to make humanitarian help possible for all people in need.” Almost 21 million people in Yemen need humanitarian aid. Some 1.8 million children are malnourished, including nearly 400,000 suffering from severe malnutrition. Yemen has been devastated since 2015 by what is seen as a proxy war between Saudi Arabia and Iran.

The Secretary General of the Mexican Episcopal Conference, Bishop Alfonso Miranda of Monterrey, called for Mexicans “not to close their eyes” to the humanitarian crisis facing Central American migrants in the country. More than 5,000 members of the main migrant caravan departed from Mexico City over the weekend. Another 3,000 people from Central America are working their way towards Mexico City from the southern border. Catholic leaders have called for churches along the route of the caravans, heading for the US border, to offer humanitarian aid.

An American member of the De La Salle Christian Brothers who was killed in Guatemala has been approved for beatification. Br James Miller was killed in Huehuetenango in 1982. He worked with indigenous people and was killed by three masked men, during the country’s civil war. Br Miller opposed the recruitment of indigenous people into the military. On 7 November, Pope Francis decreed that he could be beatified.

The Sudanese government is being urged to investigate the torture of nine Christians, detained by the National Intelligence and Security Service on allegations of apostasy. Twelve men were arrested on 13 October while meeting at the home of a church leader in Nyala, in South Darfur. Three were freed without charge but, according to Christian Solidarity Worldwide (CSW), the remaining men were held for five days, tortured and pressured to renounce their faith. CSW’s chief executive, Mervyn Thomas, said: “This case stands out as a particularly serious and calculated violation of individual rights, and highlights the National Intelligence and Security Service’s habitual use of torture.”

Ethiopia’s Catholic bishops have welcomed the appointment of the country’s first female president, saying they are pleased that women “are getting their rightful place in the development of the country”. President Sahle-Work Zewde, 68, a career diplomat, is Africa’s only female head of state. “The Ethiopian Catholic Church believes that President Sahle-Work Zewde will further strengthen the leading role that Ethiopia is playing in the region and further enhance the soft power of the country at an international level,” said a Church statement.

The Indonesian government has given a national Catholic women’s organisation an award for its efforts to promote wellbeing and diversity in society. The Catholic Women of the Republic of Indonesia received the award on 6 November for its initiatives in health, education, culture and the environment. The women’s group has around 90,000 members.

Hong Kong’s emeritus bishop recently flew to Rome to present a seven-page letter to Pope Francis appealing for him to review the crisis facing the underground church in China. Cardinal Joseph Zen Ze-kiun, a long-time critic of the Holy See’s rapprochement with China, and an opponent of the September deal – which he has described as “a betrayal” – has accused the Holy See of helping the Chinese Communist Party suppress the underground community. He said some parts of the agreement have not been made public, and so “some priests have escaped, and some have disappeared because they do not know what to do and do not know if what officials say is true or not”.  He said that “the Holy See does not support them”, seeing them as “causing trouble and not supporting unity”.

Cardinal Christoph Schönborn of Vienna celebrated a memorial service with the Catholic Archbishop of Belgrade, Stanislav Hocevar, in the Catholic cathedral in Belgrade on 10 November to commemorate the end of the First World War in 1918. He wanted to “send a humble but clear signal” that Austria-Hungary’s declaration of war in July 1914 had wronged Serbia, Schönborn told Kathpress news agency before leaving Vienna.