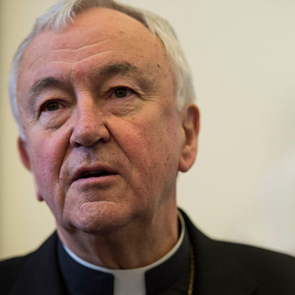 DiNardo: 'Whether we will be remembered as guardians of the abused or of the abuser will be determined by our action beginning this week.' 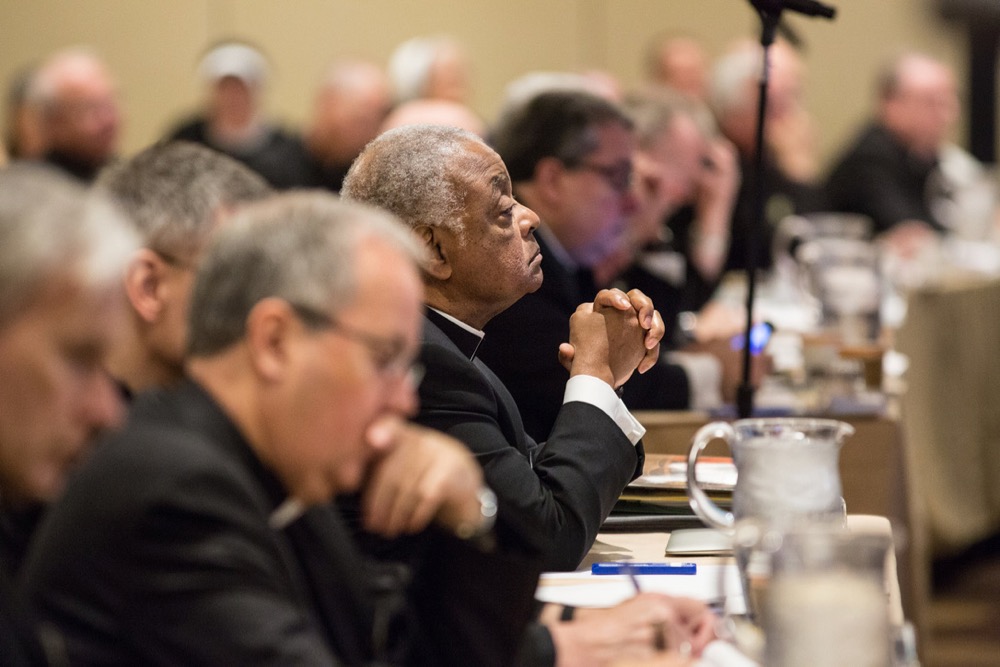 Atlanta Archbishop Wilton D. Gregory listens to a presentation during the spring general assembly of the US Conference of Catholic Bishops in St. Louis.
Photo: CNS/Lisa Johnston, St. Louis Review

What is not going to be voted on by the US bishops at their fall general meeting in Baltimore is likely to overshadow what is being discussed as they engage in three days of public sessions.

At the request of the Vatican, the vote to create a new commission to handle allegations of sexual misconduct by bishops was postponed for their Nov. 12-14 meeting. So, too, was a vote for a new set of standards of episcopal conduct, although both items will still be discussed.

Cardinal Daniel N. DiNardo of Galveston-Houston, president of the U.S. Conference of Catholic Bishops, said the request came from the Vatican Congregation for Bishops. The reasons given for the delay was Pope Francis' planned meeting in February with the presidents of bishops' conferences worldwide to deal with clergy sex abuse, and to be sure that the proposals being considered by the bishops conform to canon law.

The Vatican intervention prompted dismay and confusion across all sections of the Church in the US and abroad.

Fr James Martin SJ tweeted: "Today's @USCCB was the most confusing in memory. Everyone – including bishops and journalists – were poleaxed by the Vatican's instruction to delay any voting on sex abuse measures. This is made harder because on abuse US Catholics have lost trust in almost every church official."

Cardinal Blase J. Cupich of Chicago called for a special assembly in March to weigh and vote on the measures after being informed by the outcome of the February meeting in Rome.

"It is clear that the Holy See is taking seriously the abuse crisis in the church," Cardinal Cupich said, adding that the February meeting was a "watershed moment" in church history. "We need to be clear where we stand and tell our people where we stand," he said.

In his presidential address to the USCCB, Cardinal DiNardo took note of the historic nature of the meeting.

"Whether we will be remembered as guardians of the abused or of the abuser will be determined by our action beginning this week and the months ahead," he said. "Let us draw near to Christ today sacrificing him our own ambitions and promptly submit ourselves totally to what he demands of us both in love and justice."

He also held up his own weakness to victims in his remarks, saying: "Where I have not been watchful or alert to your needs, wherever I have failed, I am deeply sorry."

Archbishop Christophe Pierre, the apostolic nuncio to the United States -- who met privately with Pope Francis just two days before his Nov. 12 address to the bishops -- urged them to face the issue of clergy sexual abuse straight on, not to run from the challenges that confront them but "face them realistically and courageously."

He added, "There is always more to do, and we bishops must not be afraid to get our hands dirty in doing that work," he said, urging them to collaborate with the laity but to face the current crisis both individually and as a group first and foremost.

As the meeting was beginning, the bishops of Missouri made public a letter and statement sent to the chairman of the USCCB Committee for the Children and Young People. The letter to Bishop Timothy L. Doherty of Lafayette, Indiana, committee chairman, came with a 10-point plan to address the current scandal.

It said that while the bishops support some of the proposed actions from the Administrative Committee, they hoped the USCCB would address the "abuse of power that is at the center of the sexual abuse scandal of our church."

Among the points in their plan, the Missouri bishops called for putting abuse survivors to be at the center of the church's response to the crisis; strengthen the 2002 "Charter for the Protection of Children and Young People"; have each bishop mandate that the charter apply to each religious order serving in their diocese; and better utilize the charisms of the laity.

Most of the first day was set aside for prayer and reflection by the bishops in a makeshift chapel at the Baltimore Marriott Waterfront.

During this time the bishops heard from speakers, including two survivors of child sex abuse, Luis A. Torres Jr. and Teresa Pitt Green. While they remain active in the church, both spoke of the emotional pain they have lived with. They also said the church can and must do better on addressing sex abuse.

* Consideration of a proposed pastoral letter on racism, "The Enduring Call to Love: A Pastoral Letter Against Racism." "Despite many promising strides made in our country, the ugly cancer of racism still infects our nation,” it says. “Racist acts are sinful because they violate justice. They reveal a failure to acknowledge the human dignity of the persons offended, to recognise them as the neighbours Christ calls us to love," it adds. "Every racist act – every such comment, every joke, every disparaging look as a reaction to the colour of skin, ethnicity or place of origin – is a failure to acknowledge another person as a brother or sister, created in the image of God."

* The endorsement of the sainthood cause of Sister Thea Bowman, a descendant of slaves and the only African-American member of the Franciscan Sisters of Perpetual Adoration, who transcended racism to leave a lasting mark on Catholic life in the United States in the late 20th century.

* Approving a budget for 2019 that shows a small surplus, but shows far less for the USCCB's Migration and Refugee Services line item due to continuing federal cutbacks in the number of refugees being admitted into the United States.

* Hearing reports from bishops on October's Synod of Bishops on "Young People, the Faith, and Vocational Discernment," July's V Encuentro for Hispanic Catholics in the United States; and recognition of the 40th anniversary of the USCCB's pastoral statement on persons with disabilities, as well as from the National Advisory Council, a largely lay group that issues comments on agenda items facing the bishops.

The abuse crisis, though, never strayed far from the bishops' agenda. Also on the agenda were a report from the Francesco Cesareo, chairman of the National Review Board, created by the bishops in 2002 as part of its Charter for the Protection of Children and Young People; details from Archbishop Jose H. Gomez of Los Angeles on how a third-party system to report allegations by bishops would work; remarks from Heather Banis, victims assistance coordinate for the Archdiocese of Los Angeles; plus time for the bishops for open discussion of the crisis.

Outside the hotel protesters gathered to call for change and urge action by the bishops to address the widening the sex abuse crisis.