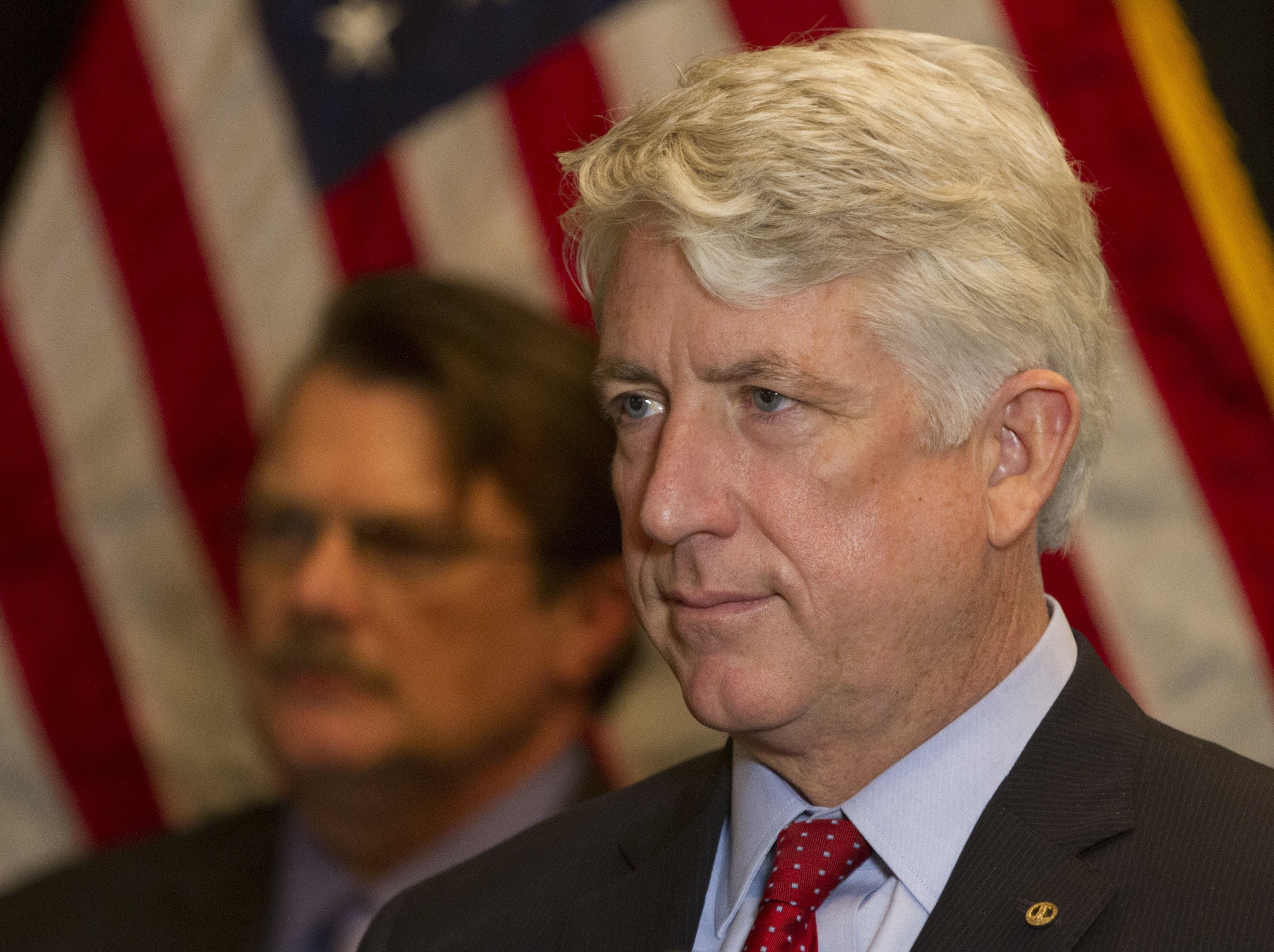 Homeless Jesus finds place to lay his head in London

The homeless Jesus sculpture is is already at Farm Street Jesuit Church in Mayfair, in the side chapel of Our Lady of the Seven Dolours. 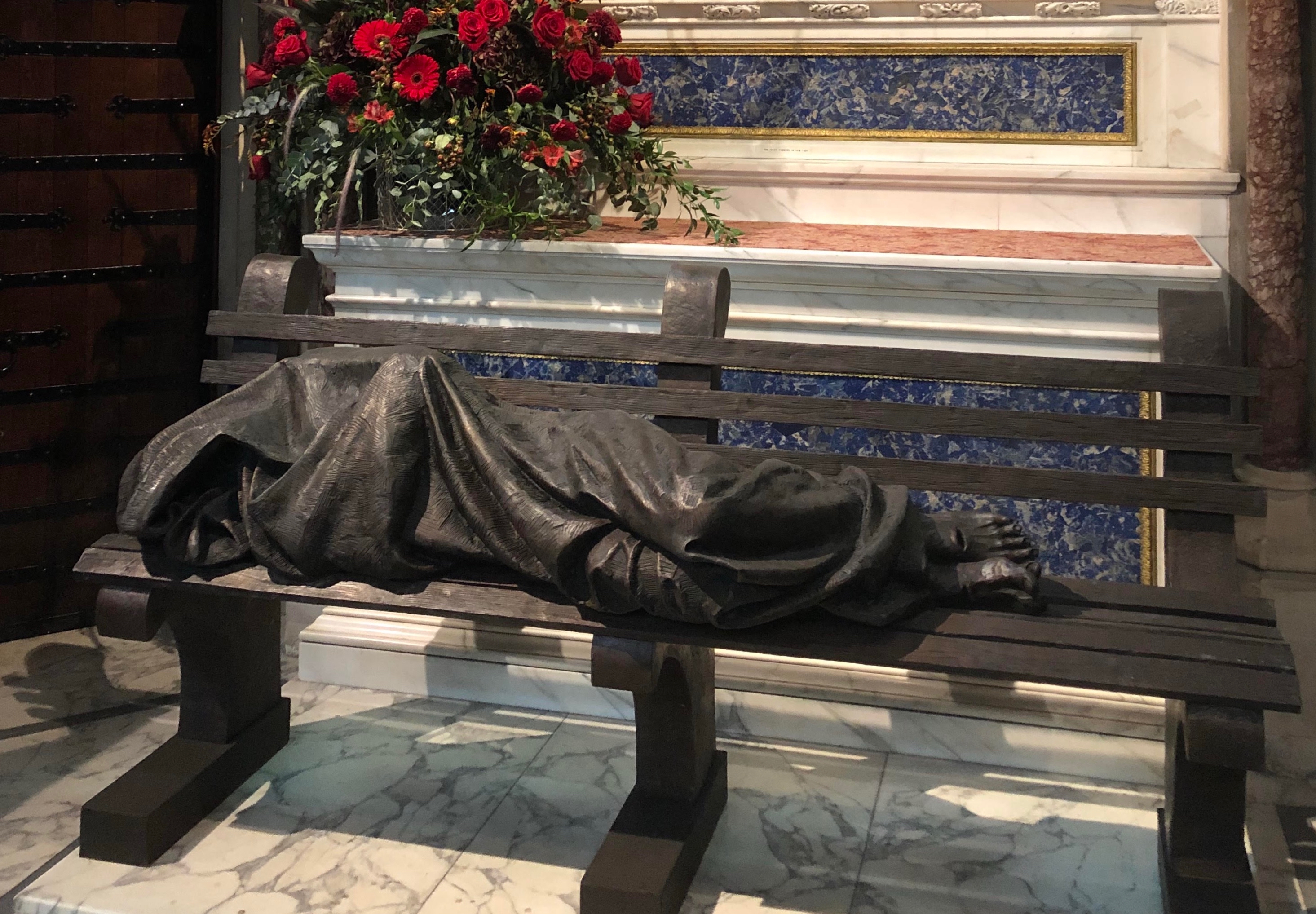 The 'Homeless Jesus' has already been installed at Farm Street but will be officially unveiled in January
Photo: Brendan Walsh

London's first "homeless Jesus" is to be unveiled in January at the Jesuit church of Farm Street, Mayfair, in January. Archbishop Edward Adams, Apostolic Nuncio to Great Britain, will say Mass and this will be followed by presentations in the church hall by the sculptor, Timothy Schmalz and and by partners working with the Jesuit Refugee Service and the Cardinal Hume Centre.

The sculpture depicts Jesus as a homeless person, sleeping on a park bench with his face and hands are obscured by a blanket but crucifixion wounds on his feet revealing his identity. It was denied a home in London two years ago after Westminster City Council refused permission for one to be installed outside Westminster Central Hall near the Houses of Parliament.

This one will not be outside, and in fact is already in situ inside Farm Street Jesuit Church in Mayfair, in the side chapel of Our Lady of the Seven Dolours.

The new parish priest Fr Dominic Robinson SJ, who began his ministry at Farm Street this month, said: "It is fitting to place the Son under the protection of His mother depicted in grief where the crucifixion wounds and Mary's pierced heart are so close together. The permanent home here for Homeless Jesus allows its message to ring true and reflect the core beliefs of the congregation and may inspire all those who see it to thoughtful consideration and action in the community."

He added: "Jesuit commitment to faith and justice in action finds expression here as a sign of welcome to all, a challenge to a culture of exclusion and judgement." 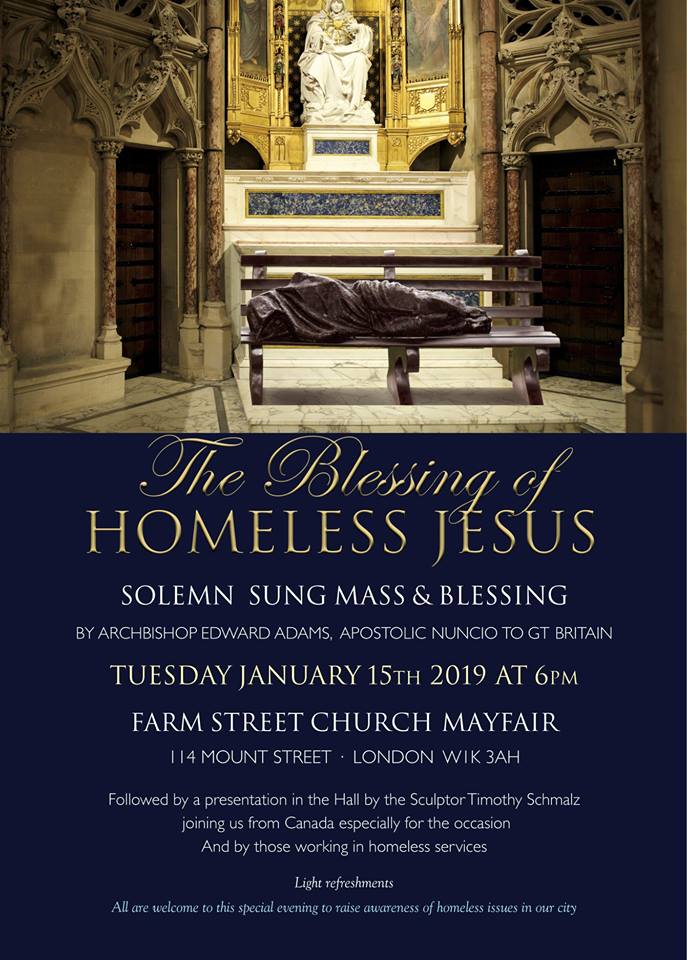 In a press release today, the Jesuit communications office explained: "Farm Street Church is the perfect location in the centre of London for Homeless Jesus because the parish has ministered to homeless people in a very practical way for the last four years as an active member of a consortium of faith organisations who provide food and accommodation to street homeless people for eight months of the year."

Parish administrator and project co-ordinator Scott McCombe said: "Here at Farm Street we host fifteen homeless people on Monday nights during four months of the year. Volunteers from the parish have organised a rota for setting up the church hall, welcoming the guests, eating a hot meal with them, tidying up and setting up the hall as a dormitory."

The guests are referred by the West London Day Centre, a charity which supports homeless people from a base in Marble Arch; and food is donated by a range of Mayfair businesses.

Scott said: "Most of the businesses we ask respond positively and are very generous, and we are lucky in our very enthusiastic and dedicated volunteers. We all get great satisfaction, not just from putting our faith into action in this practical way, but also when we hear about how people have managed to turn around their lives, secure permanent accommodation and find work."

The Homeless Jesus project began with the Jesuits in Canada and the first cast is at Regis College in Toronto.

The one outside the Vatican's charity offices in Rome was blessed by Pope Francis, who has described it as a "beautiful and excellent representation" of Jesus.