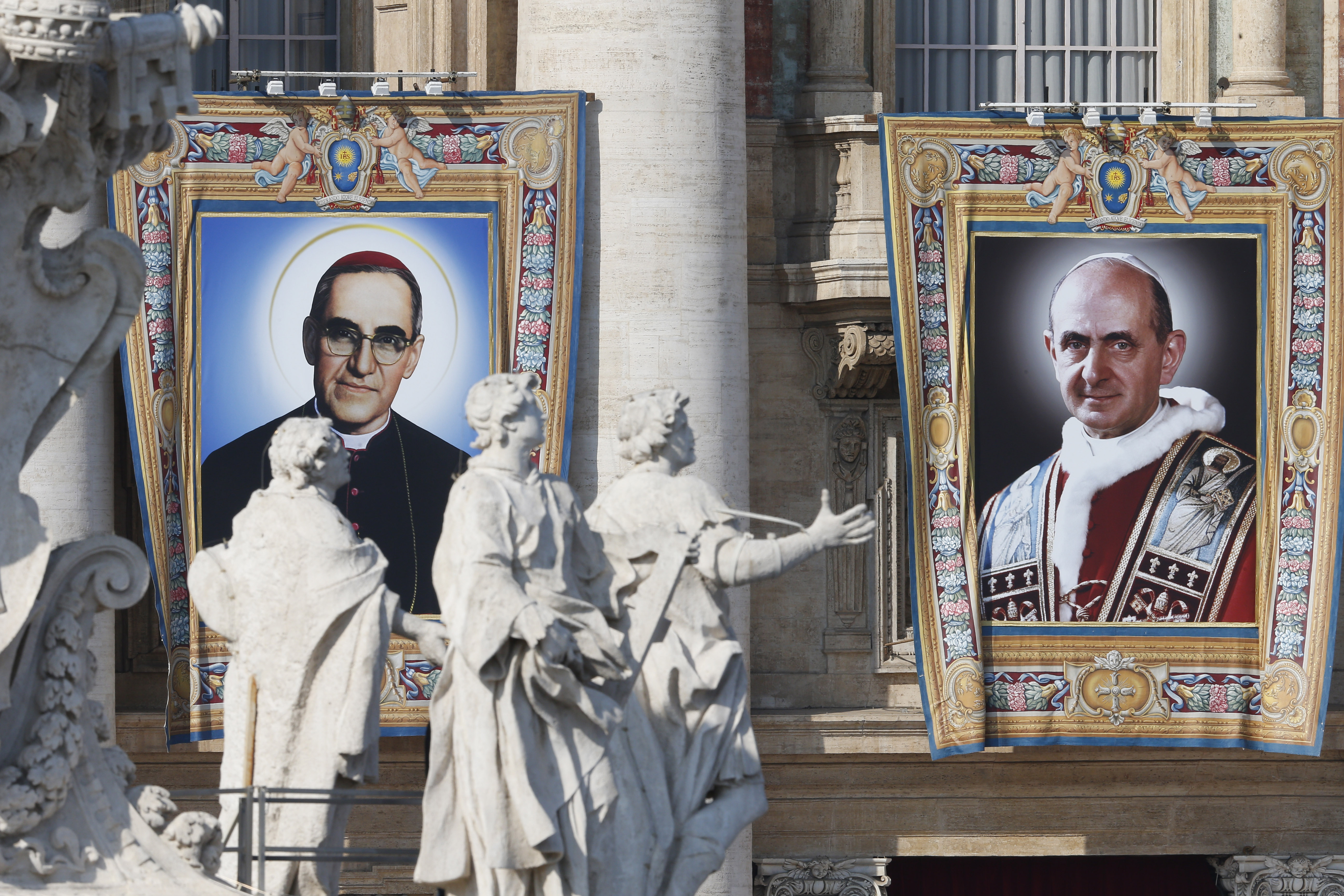 He has assumed the status of national hero, whose words sound prophetic and seem apt almost four decades after his death 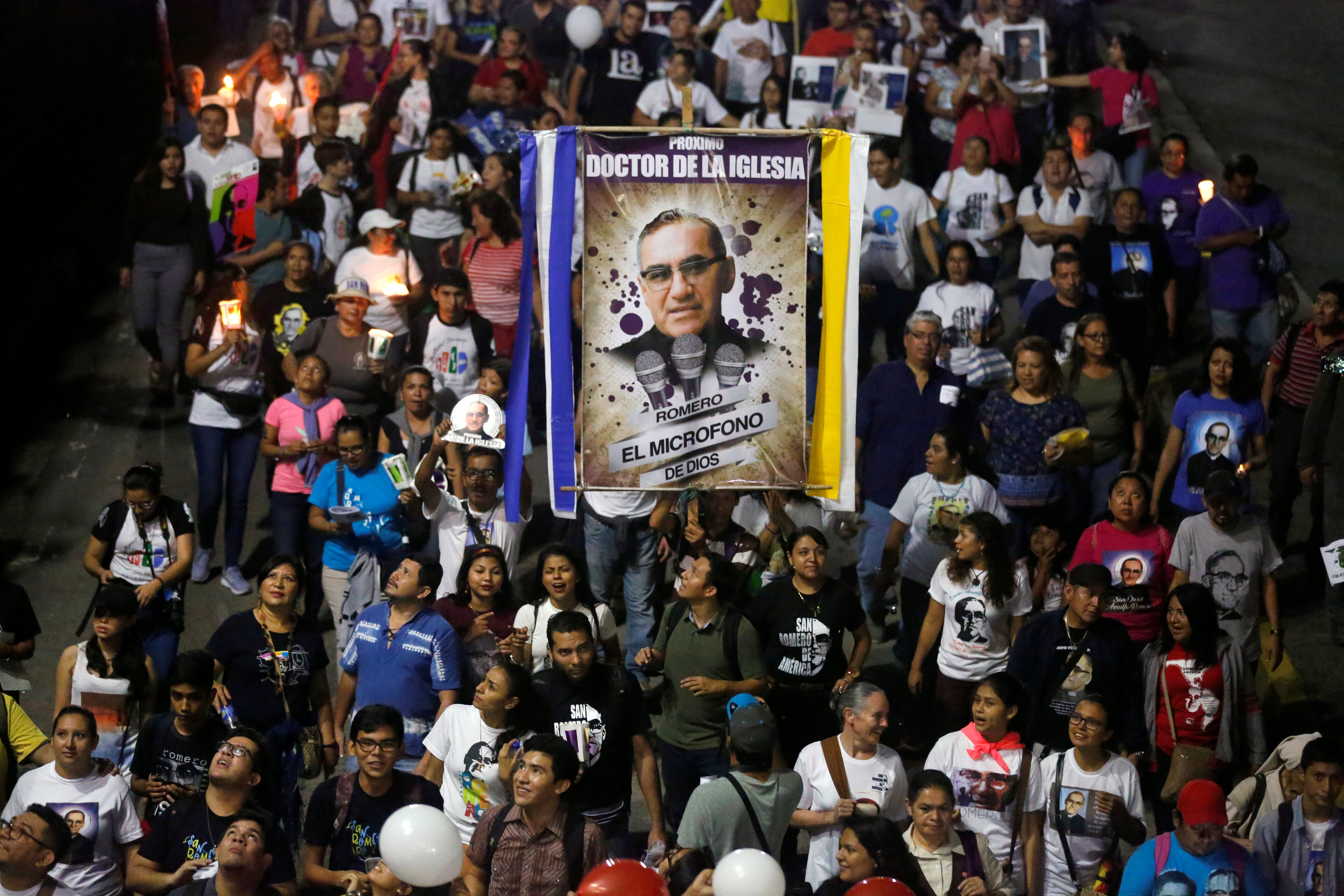 Near the end of his homily at a Mass just prior to St. Oscar Romero's canonisation, Jesuit Father Jose Maria Tojeira yelled to the crowd outside the Metropolitan Cathedral: "Viva Monsenor Romero!" (Long live Bishop Romero!)

"We're not venerating a body," Father Tojeira said, "rather someone who is alive, together with God and in the hearts of all Christians that want to continue with the reality of the Gospel."

During the 14 October at the Vatican -- very early morning in El Salvador -- Salvadorans gathered in the square outside the cathedral to watch the ceremony on big screens; others watched in their parishes.

St. Romero was shot dead while celebrating Mass 24 March, 1980. His legacy of showing a preference for the poor and promoting peace lives on in his native El Salvador, where, even in death, he plays an outsized role in the country's public life and occupies a special place in its collective consciousness -- for devotees and detractors alike.

He becomes El Salvador's first saint. But his current role in the country transcends religion. He also has assumed the status of national hero, whose words -- spoken in homilies -- sound prophetic and seem apt almost four decades after his death.

"He still is the most venerated and respected leader of the last 100 years, certainly the last 50 years," said Rick Jones, youth and migration adviser for Catholic Relief Services in El Salvador.

"He's still the sign post of what people are looking for in terms of some voice that talks about reconciliation, justice and hope for nonviolent transformation."

St. Romero's slaying came as the country was on the cusp of civil war, which roared through the 1980s. His canonisation comes as the country convulses with violence, much of it attributed to gangs preying on populations living in barrios under their control.

As archbishop of San Salvador, the national capital, St. Romero accompanied the poor at a time when some two-thirds of the population lived in poverty. He also voiced people's demands for better wages and criticisms of the "oligarchy"  -- as the elites were caustically called -- at a time when his critics considered such talk "communist." He also called for a suspension of US military assistance.

The poverty and inequality St. Romero spoke out against are still rife in 2018. Many Salvadorans also still flee the country to escape the violence and indignities, causing his words to resonate with younger generations and even some evangelicals and atheists.

"What he said is still valid. His words still carry enormous weight," said Douglas Martinez, a vendor in San Salvador. "He was practically a prophet on this earth."

Canonisation was never certain for St. Romero, though some in the country have long considered him a saint.

"For me and for many people in the country -- a good number of people with a social commitment -- Bishop Romero has been a saint since his martyrdom, and now it's going to be the formal act," said Gabina Dubon, coordinator of the transformational social ministry in Caritas El Salvador.

"In that time there was no freedom of expression. He became a voice for those without a voice, a defender of life, dignity, solidarity and the common good."

St. Romero served only three years as archbishop of San Salvador, yet he left a legacy via his homilies, which were broadcast across the country.

Participants in a procession to the cathedral carried signs with quotes culled from those homilies. "There's no more diabolical sin than taking bread from the hungry," read one sign. "It's necessary to call injustice by its name," read another.

The celebrations carried political overtones for some. A UN truth commission named Roberto d'Aubuisson, an ex-army officer and founder of the conservative ARENA alliance, as the intellectual author of the murder. He died of cancer in 1992.

Father Neftali Ruiz carried a banner castigating ARENA, but saying of Romero, "The people made him a saint."

Father Ruiz stood outside the same cathedral where tens of thousands of Salvadorans mourned St. Romero at his funeral. Snipers opened fire on the funeral, killing at least 40 people.

Only one Salvadoran bishop attended the funeral: Archbishop Arturo Rivera Damas, who was named St. Romero's successor in San Salvador.

"He always defended Romero," Father Tojeira said of Archbishop Rivera, "but speaking in confidence ... he would say, 'A bishop like Romero arrives every 500 years.'"

The St. Romero canonisation showed how time had changed in the country and church though, in an interview, Father Tojeira quipped of St. Romero's critics, "They used to say 'communist.' They now have a little more civilised discourse but continue being similar."

Celebrations of the canonisation occurred in dioceses across El Salvador -- even in San Vicente, where priests would bless army helicopters during the civil war. Father Ruiz recalled being expelled from the minor seminary there in 2000 for refusing to stop displaying an image of St Romero.

Today, images of St. Romero grace everything from postage stamps to murals to the walls of the presidential palace to political ads, as the ruling party attempts to capitalize on his popularity and incorruptible reputation.

"(Politicians) don't practice what he preached," said Elsy Cornejo, who was selling CDs of St. Romero's homilies. "He spoke of peace and accompanying the poor."

With the murder rate in El Salvador ranking among the highest in the world and gangs preying on poor barrio dwellers with crimes such as extortion and the forced recruitment of teenagers, Cornejo added, "We're also practicing very little of what he preached."

Church observers expressed hope St Romero's canonisation could bring unity to a country with polarised politics and offer a possibility of improvement.

"He presents a figure for reconciliation," Jones said, "and a different way to move forward other than ... just the left or the right."