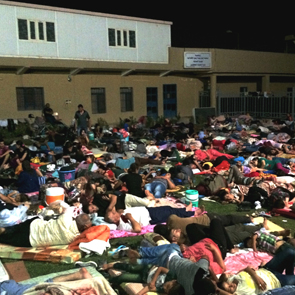 Cuba’s communist Government has permitted the building of the first new Catholic church since the Marxist revolution of 1959.

The church will be built in the country’s second city, Santiago de Cuba, where Catholics have been hearing Mass in the street since Hurricane Sandy destroyed their previous church, a termite-eaten wooden structure with a leaking tin roof.

Part of the new church will be built from the steel beams of the stage on which Pope Benedict XVI said Mass when he visited Havana in 2012.

The project will be funded in part by St Lawrence Parish in Tampa, Florida, most of whose members are Cuban exiles or descendants of exiles.

The Archbishop of Santiago de Cuba, Dionisio Garcia Ibanez, told the BBC: “I think it’s not only about improving attitudes to the Catholic Church, but to Churches in general. I think there’s a better understanding of religious affairs, so we hope it won’t only be this church that we build. We hope there’ll be more.”

In the early years after Fidel Castro became president, many church properties were confiscated by the Government. Since then, Catholics and other Christians have developed networks of “house churches” where there are not proper church buildings available.

However a report out last week from the ecumenical religious freedom charity Christian Solidarity Worldwide found that while Havana made a few concessions to the Catholic Church in the wake of Pope Benedict's visit, other denominations still reported a high number of religious freedom violations. Chief Executive Mervyn Thomas warned against seeing "concessions or privileges extended to a few religious groups as an overall improvement in religious freedom, even as other groups report continued and worsening persecution".