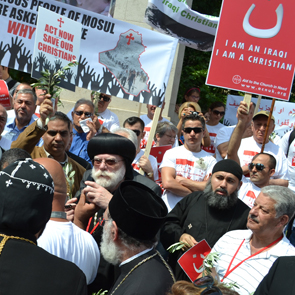 French cardinal in Kurdistan calls for solidarity with Iraqi Christians

At least five people were killed and eight were injured yesterday in a bomb attack on a Catholic church in a predominantly Christian area of the city of Kano in northern Nigeria, police said.

"We suspect an IED (improvised explosive device) that was thrown from across the road" at the church in Kano's Sabon Gari district, which has previously been targeted by the Islamist group Boko Haram, he told the AFP News agency.

Also in Kano on Sunday, a woman suicide bomber blew herself up outside a university after police prevented her from carrying out an attack, injuring five officers, Mr Mba said.

Police also said they had made safe a car bomb rigged to blow via remote control near a mosque and the home of a prominent Kano sheikh on Saturday.

The worsening violence on Sunday prompted Kano's Emir Sanusi Lamido Sanusi to cancel Eid festivities – marking the end of the month of Ramadan – which were due to begin next week.

The Islamist group has also stepped up raids into neighbouring northern Cameroon in recent weeks, and suspected Boko Haram militants kidnapped the wife of a senior Cameroonian minister and a traditional leader yesterday in attacks that left at least six dead on Sunday.