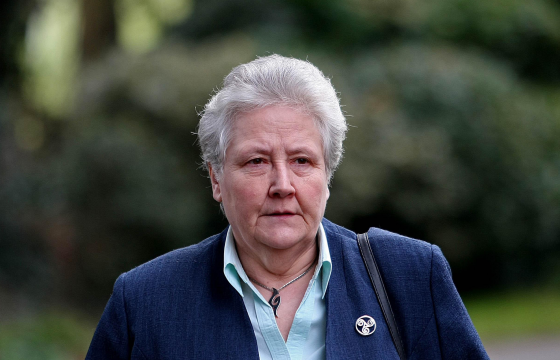 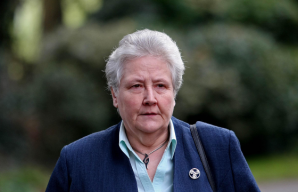 Marie Collins is exhausted. She’s been at the centre of a media whirlwind after resigning from Pope Francis’ child protection commission, a decision she took after becoming frustrated by Vatican politics and infighting.

“I think I’m going to throw a blanket over my head and sleep for a week,” she says.

This is not just a story about her stepping down from a committee. If that was the case she might have just taken everything in her stride. No, the last few days have been emotionally draining for Mrs Collins because, for her, sexual abuse is personal and its prevention has been her life’s work.

One of the most prominent clerical abuse victims, she was raped as a 13-year-old patient inside Dublin’s Catholic hospital by its chaplain. The ordeal caused her terrible damage; she felt the abuse was her fault, she was weighed down with guilt and lost her confidence. Like many others, her pain was compounded when the complaints against her abuser were ignored and mishandled by the Church.

But Mrs Collins is a survivor. She became an expert in child protection working with both the Archdiocese of Dublin and the Irish church to develop robust safeguarding guidelines. A straight talking woman of high principle, she is respected as an independent voice who acted as a bridge between victims and the Church. After experiencing the dark days of cover-ups in Ireland she understood the demands of survivors but at the same time wanted to help bishops make the necessary reforms.

So, in 2014, she agreed to sit on a commission reporting directly to the Pope on how the Church can improve child protection. Over the last three years its worked hard on pushing for reforms including better policies and trying to make bishops who cover-up accountable, all of which have been agreed to by Francis.

“He accepted all the recommendations,” she tells me. “The problem is not with the Pope. The problem comes with the implementation and the unwillingness of those in his administration to put those proposals into place.”

It is inside the Roman Curia, at the Vatican’s doctrinal body the Congregation for the Doctrine of the Faith (CDF), where there’s been resistance and a refusal to co-operate with commission. They are the body which oversees priest sexual abuse cases, a task which requires sifting through evidence of stomach churning crimes committed by priests and then making recommendations for sanctions. Its a gruelling job but one the CDF guards zealously. To their eyes it is a task for the Church’s internal legal system where cases of “grave delicts” - the most serious sins - must be assessed correctly in accordance with canon law. It is a task almost exclusively carried out by priests.

So when the papal commission came along, with its lay experts of men and women there was suspicion. This new group, the officials thought, did not have any juridicial authority over their handling of canonical process. To their eyes this commission was just an advisory group and not even an official part of the Vatican.

The commission wanted to break into the closed circle and work with the CDF on improving the template for bishops drawing up child protection guidelines, a process that had been underway since 2011. Mrs Collins and the team also worked to ensure there was a mechanism in place to ensure bishops who failed to keep to their guidelines were held accountable.

“You can have the best guidelines in the world but if you don't implement them, and if there are no consequences if a bishop doesn’t follow them, then they are not worth the paper they are written on,” she stresses.

Mrs Collins says there was a lack of co-operation on setting up a procedure to hold bishops responsible, which is still not properly up and running. Vatican sources say there is already a tribunal in the CDF which could be used for such cases although no case has yet been brought. Meanwhile the Pope announced another procedure to hold the hierarchy accountable using other Vatican departments.

The final straw for Mrs Collins, however, was the lack of pastoral concern for victims and came when one Vatican department refused a request to reply to letters from survivors.

“It is what the Pope has spoken about - the clericalism and that arrogance of ‘we know best’ along with a resentment of outsiders and lay people coming in,” she says.

“That is the reason for me stepping down. It’s because of the attitude which says ‘we’ve been doing it for years and why should we listen to you’. Taking advice is seen as somehow reducing their authority.”

“Early on none of the Vatican departments to send representatives to talk with our working groups,” she explains. “If you are asked to improve something then you ask people to help but there was resistance even to us wanting to discuss the issues.”

She goes on: “I found that very disheartening. I could see no reason why that would happen. In the outside world it would be normal to work with a group coming to help you on an issue. The first thing you would do would be to talk to them. Even that was resisted in the beginning.”

Attitudes have started to change and Mrs Collins stresses there is a new openness in the Roman Curia to learning from the expertise of commission members.

“Its always been my wish to help people understand about abuse and how it is caused. I think its very good that departments in the Vatican are open and asking for training, that’s really positive,” she says.

“We had an event last year for the Congregation for Clergy and the new bishops and there are training events for other dicasteries. This clericalism, this arrogance that shouldn’t be there is not universal and I don’t want to speak negatively of the entire curia.”

Her overarching point is the need for a change in culture. And this starts at the top. The Pope is in the firing line for not “getting it” when it comes to abuse and for adopting an overly merciful stance to abusers. Furthermore, while he has met with individual members who have stayed at his residence, the Casa Santa Marta, he has never attended a meeting of the commission.

Mrs Collins says Francis has made some questionable decisions on abuse but believes he has never done anything to put children at risk. She’s also heartened by his calls for “zero tolerance” on the matter.

“The core point is that no one has been put into position of endangering children as a result of his decisions,” she says.

What seems to have worn heavily on her are the internal politics of the Vatican, a place which is byzantine and confusing to outsiders at the best of times. Add to the mix the Pope’s shakeup of the Roman Curia and you have the commission trying to work within a cocktail of competing empires guarding their turf during a period of transition.

Mrs Collins says she took up her role in the commission with her eyes wide open about the internal politics although now admits: “they were worse than I could have imagined.”

The word in Rome is that opponents to the papal commission on safeguarding were resistant to their recommendations in order to undermine Francis, something which Mrs Collins describes as “shameful”.

“I can’t get my head round why men of God would allow their internal politics to hinder the work of safeguarding children from the horror of abuse,” she says. “I can’t see how any internal power struggles, whatever they may be, can stop you from taking steps to prevent harming children.”

Mrs Collins was the last survivor working on the commission - the other, Peter Saunders, is on a permanent leave of absence - although she is not completely cutting her ties with the Church continuing to be involved in educational courses at the Vatican.

What she resents is the argument made in recent days that, as a victim, it is better for her to remain outside the official Church structures because she can’t both implement policies and advocate for survivors.

“Just because you are abused as a child and put in the survivor box, does not mean you can’t be an expert and work with other experts,” she says. “In 20 years here in the diocese [of Dublin] I’ve never worked in any other way than independently. I was never afraid of the Church nor was I afraid of the survivors. I work simply and solely for the protection of children.”

Her independence and impartiality means that Mrs Collins resignation is a big loss for the Church as it continues to grapple the monumental problem of clerical sexual abuse. Her work on the commission shows that progress is being made and the group says it will press on with its work. But this latest debacle, which has laid bare some of the internal resistance to reform inside the Church, show there’s still a long way to go.