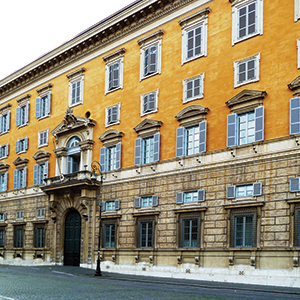 Who rules in Rome: Unprecedented doctrinal division emerges in the Vatican

The debate over Amoris Laetitia is more than just a wrangle about the correct interpretation of a particular passage or footnote in a church document. Pope Francis is simply reminding us of the proper role of doctrine within athe life of the mature Church

The abiding significance of the Second Vatican Council might be summed up in one simple assertion: it called us to become an adult church. Yet in the years since the council we have struggled to live up to this summons.
The controversy over Amoris Laetitia goes much deeper than a dispute over whether or not Pope Francis is right, under certain conditions, to admit divorced and remarried Catholics to Communion. What the imbroglio reveals is that we are still not engaging the doctrines of the Church – its formally expressed teachings – with the habits of mature Christian discipleship.

The very mention of “doctrine” is often an occasion for scepticism both inside and outside the Church. Broader cultural forces have contributed to this marginalisation of doctrine. In a consumer-saturated culture, doctrines can become free-floating truth-claims, unmoored from the communal tradition and practice that makes them intelligible.

The flipside of this commodification of doctrine is an attitude to official Church teaching that is dependent upon whether or not it agrees with one’s prior convictions. If it does, believers will embrace it enthusiastically as a norm for Christian belief and practice; if not, they will simply discard it. There is also the increasingly familiar pattern of religious engagement, which affirms “spiritual seeking” but in ways that circumvent traditional institutions and accounts of religious belief.