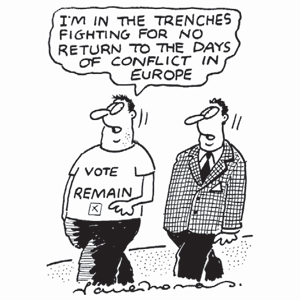 ‘Despite our separate identity, we are part of the whole’

Free movement of citizens within its borders is a mark of the EU’s democratic legitimacy. This in turn has its roots in the dignity and freedom of the individual

Is there not a contradiction deep at the heart of the Brexit campaign? On the one hand, the Leavers rail against the democratic deficit in the European Union (EU); on the other hand – and here they find most of their popular support – they demand an end to the free movement of EU citizens across the borders of member states, or at least of this one. Yet both democracy (which they support) and the free movement of citizens (which they do not) have their roots in the freedom and dignity of the individual human person.

Migration is the most sensitive issue in this referendum campaign, especially so-called “economic” migration. Even if the response of the UK and the EU as a whole to the refugee crisis has been lamentable, few would question the moral legitimacy of the legal right to asylum, though many would say preferably “not in my backyard”. The more difficult issue has been migration within the EU, and what I have not heard from the Remainers (and we are unlikely to) is the positive case for ­“economic” migration. Indeed the word ­“economic” is heavily loaded, as is the usual phrase “the free movement of labour”, as though labour were a commodity no different from goods or money.